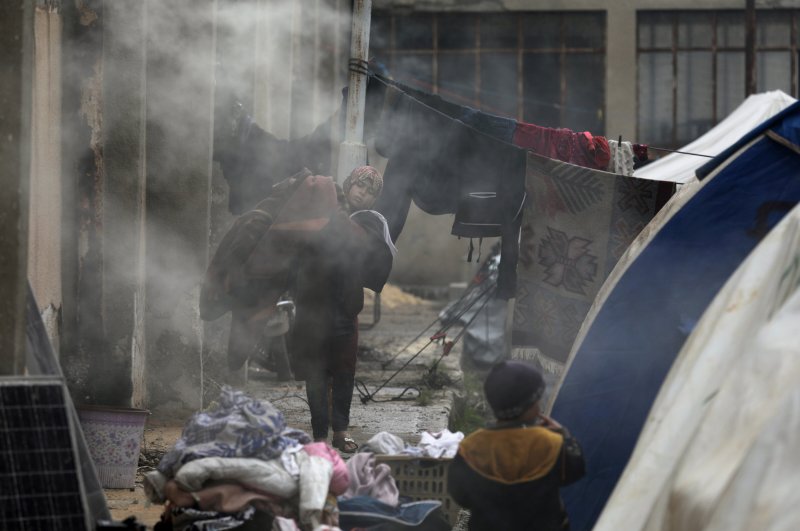 Internally displaced children walk outside tents, erected in the courtyard of an empty school and university compound used as a shelter, in Azaz, Syria, Feb. 21, 2020. (Reuters Photo)
by Daily Sabah with AA Feb 27, 2020 8:43 am
RECOMMENDED

Turkey is the only country concerned about the fate of the desperate civilians affected by the ongoing Assad regime offensive in northwestern Syria's Idlib province, the Washington Post's editorial board said Wednesday, condemning the regime and Russian aggression in the area.

The editorial entitled "Syria's carnage nears a horrific climax" highlighted that the situation in the region is deteriorating amid indifference by Western governments, which have been exhausted by the unending civil war in Syria as they are distracted by their own political conflicts.

"The only defender of these desperate people is Turkey, which has dispatched thousands of troops, tanks and artillery into the region in recent weeks," the editorial said, adding that President Recep Tayyip Erdoğan has threatened to launch a cross-border operation against Bashar Assad's forces unless they pull back by the end of February.

The daily accused Russia and the Syrian regime of deliberately prompting an exodus by relentlessly bombing civilian targets in Idlib, noting that the indifference of western governments has resulted in "a tragically muted reaction as the Syrian war approaches a horrific climax in the northern province of Idlib."

The board said the offensive does not distinguish between "terrorists" and the more than 3 million civilians in the province.

It stated that the Assad regime is determined to recapture all of Idlib.

"And the relentless pattern of the Syrian war has been unfulfilled Russian promises to control Damascus," it added.

The board also urged the U.S. and European countries to pressure Russian President Vladimir Putin to curtail the offensive and allow humanitarian aid into Idlib.

"They should make clear to Moscow that it will pay a substantial price – in the form of new sanctions and a reversal of European moves toward better relations – if the carnage does not cease," it wrote.

More than 1,300 civilians have been killed in the Idlib de-escalation zone despite a deal reached by Ankara and Moscow in September 2018.

Over 1 million Syrians have moved near the Turkish border following intense attacks.

Since the bloody civil war in Syria began in 2011, Turkey has taken in over 3.6 million Syrians who fled their country, making it the world's top refugee-hosting country.