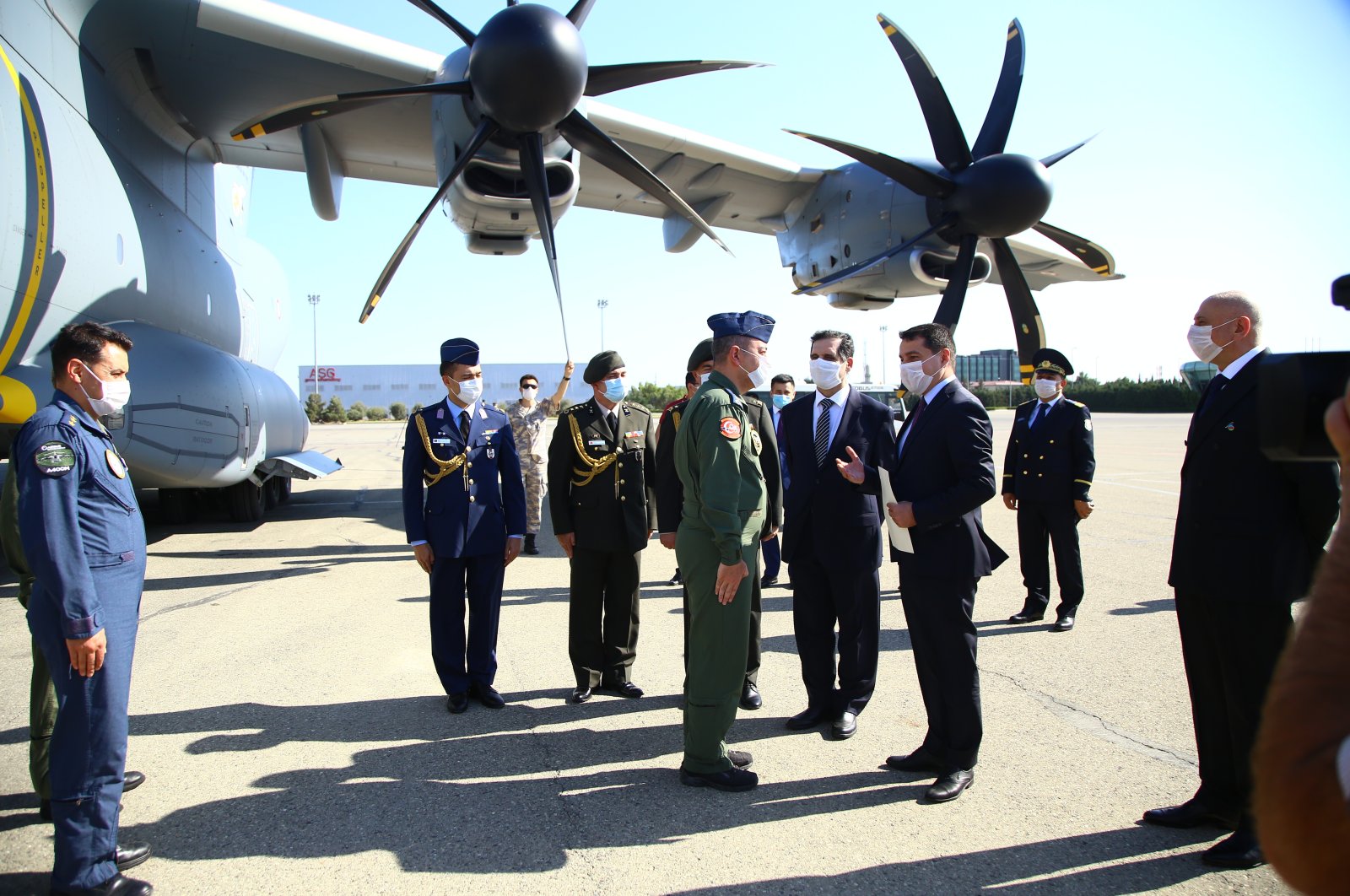 Medical aid is received in a ceremony attended by Turkish and Azerbaijani officials in Baku, Azerbaijan, July 5, 2020. (AA Photo)
by DAILY SABAH WITH AA Jul 06, 2020 11:32 am
RECOMMENDED

Turkey has sent medical supplies to Azerbaijan to contribute to the country's fight against the coronavirus, Turkey's Embassy in the capital Baku said Sunday.

It stressed that the aid is a "strong manifestation of the brotherhood" of President Recep Tayyip Erdoğan and Azerbaijani President Ilham Aliyev.

The fight against the pandemic will only succeed if all countries show cooperation and solidarity, it added.

Reiterating that Turkey has so far provided aid to nearly 140 countries to support their fight against COVID-19, the embassy expressed hope that this aid will contribute to Azerbaijan's coronavirus battle.

Özoral officially handed over the medical aid as well as passed on a letter from Erdoğan to Aliyev.

In the letter, Erdoğan conveyed his condolences for the Azerbaijanis who lost their lives in the pandemic and wished a quick recovery for those in treatment.

"We're ready to make every possible contribution to our friend and brother Azerbaijan under the slogan of 'one nation, two states,'" he said.

Özoral stressed the two countries' solidarity with each other, adding that they stand together on both good days and bad.

"We continue to cooperate on COVID-19 at the highest level," he said.

Hajiyev told reporters that Azerbaijan and Turkey are fighting the disease together at both the regional and global levels.

He also thanked Turkey for the aid shipment, saying: "This is a clear indication of friendship and brotherhood between our countries. After this, Azerbaijan and Turkey will continue their joint efforts in the fight against COVID-19."

Hajiyev added that the health institutions of the two countries will consult and share experiences in battling the pandemic.

Turkey sends medical aid packages to various corners of the globe every other day.

"We have sent medical equipment and supplies to 138 countries, regardless of religion, language, race or region," Erdoğan said Saturday at an inauguration ceremony for a new state hospital in Istanbul.

Turkish-made respirators have been used in many countries "from Brazil to Somalia," he added.

Since it originated in China last December, over 11.3 million COVID-19 cases have been reported worldwide, with recoveries topping 6.1 million, according to figures compiled by Johns Hopkins University.

The global death toll currently stands at over 531,000.