Turkey ready to do whatever necessary for security of Turkish Cypriots, Defense Minister Akar says 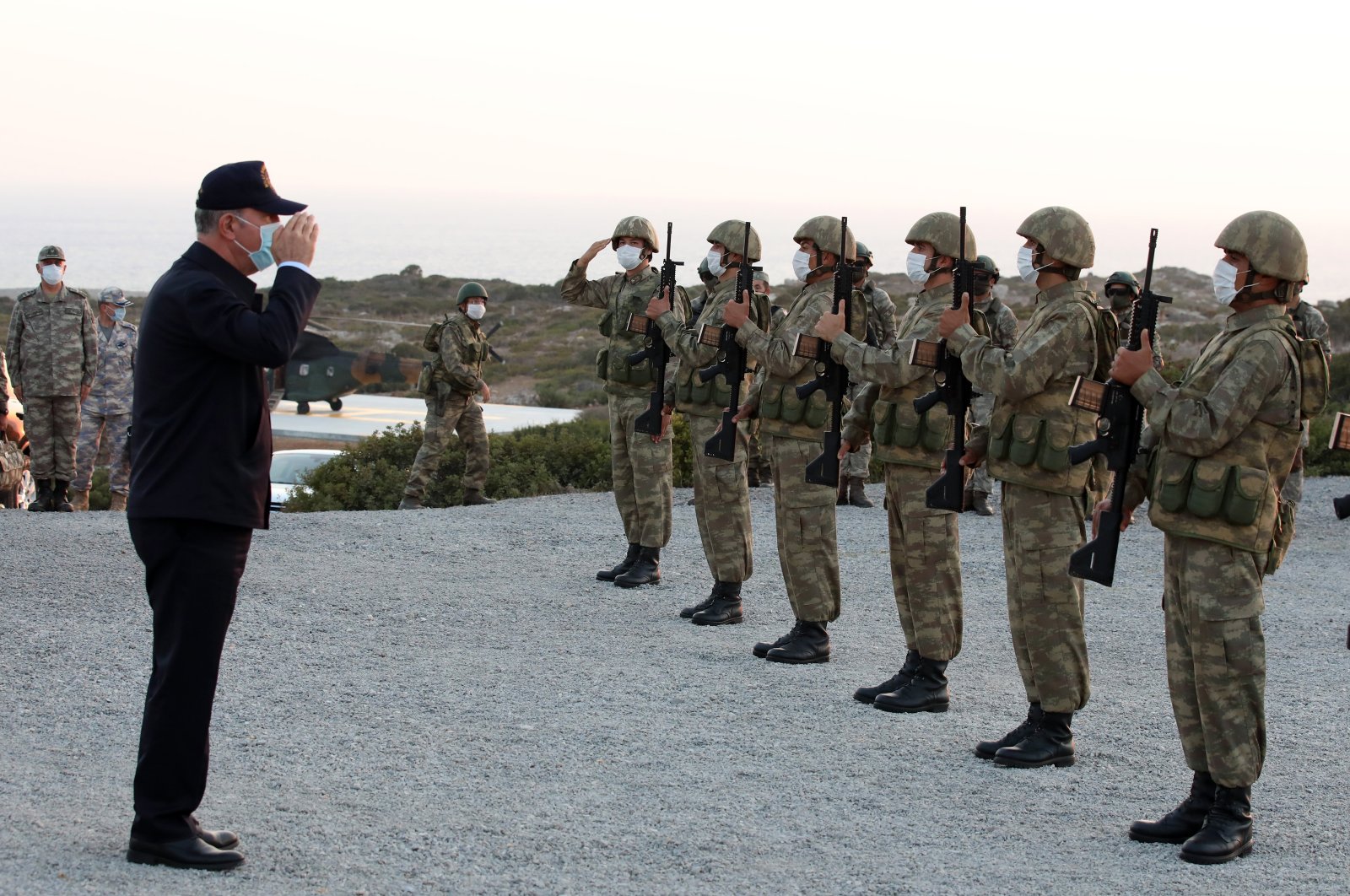 Turkey is ready to do whatever is necessary in order to ensure the security and survival of Turkish Cypriots, Defense Minister Hulusi Akar said on Monday.

The Turkish defense minister paid a visit to the Turkish Republic of Northern Cyprus (TRNC) on Sunday to observe the Mediterranean Storm-2020 Exercise.

After completing his visit to Turkey's Kaş district in southern Antalya province, Akar and Chief of General Staff Gen. Yaşar Güler along with other military officers arrived in Lefkoşa (Nicosia), the capital of TRNC.

Speaking there, Akar reiterated Ankara’s determination to protect the rights of the TRNC along with Turkey.

Reminding that Turkey is a guarantor country in Cyprus based on international agreements, Akar added: “We recognize the issue of Cyprus as a national issue, and we are here. We did everything, and we are ready to do everything for the security and survival of our brothers in TRNC with the same spirit and enthusiasm as we had in 1974. We have rights and interests in the Eastern Mediterranean. Some countries act against them. We follow these developments with a lot of patience.”

“We side with peace, dialogue, negotiations and a political solution for the issue. On the other hand, we will not allow any fait accompli,” he added.

After the forcible division in 1963 of the island of Cyprus by the Greek Cypriots, Turkish Cypriots suffered under a campaign of ethnic violence. In 1974, following a coup aimed at Cyprus' annexation by Greece, Ankara had to intervene as a guarantor power. In 1983, the TRNC was founded.

For many decades, talks were held to resolve the dispute, all of which ended in failure. The latest, held with the participation of the guarantor countries – Turkey, Greece and the U.K. – ended in 2017 in Switzerland. In 2004, the plan of then-U.N. Secretary-General Kofi Annan for a solution was accepted by the Turkish Cypriots but rejected by the Greek Cypriots in referendums held on both sides of the island.

The armed forces of Turkey and the TRNC started joint military exercises in Turkish Cyprus on Sept. 6.

The same day, Turkish Vice President Fuat Oktay had announced on Twitter that the exercise, Mediterranean Storm, is a demonstration of their will to stand against those trying to confine Turkey to the Gulf of Antalya while ignoring the Turkish Cypriots.

Amid tensions over the Mediterranean territory and energy exploration, Turkey has repeatedly stressed its willingness to start negotiations without preconditions, in contrast to Greece's refusal in recent weeks to enter dialogue through both NATO or the European Union. On Sunday, Greece's prime minister said he is ready to talk to President Recep Tayyip Erdoğan if tensions between the two countries eased.

Ankara has consistently opposed Greece's efforts to declare an exclusive economic zone (EEZ) based on small islands near Turkish shores, violating the interests of Turkey, the country with the longest coastline in the Eastern Mediterranean. The country has also said energy resources near the island of Cyprus must be shared fairly between the TRNC and the Greek Cypriot administration.

Erdoğan has said the only solution to the dispute lies in dialogue and negotiation to reach a win-win deal and has urged Athens to respect Turkey's rights.