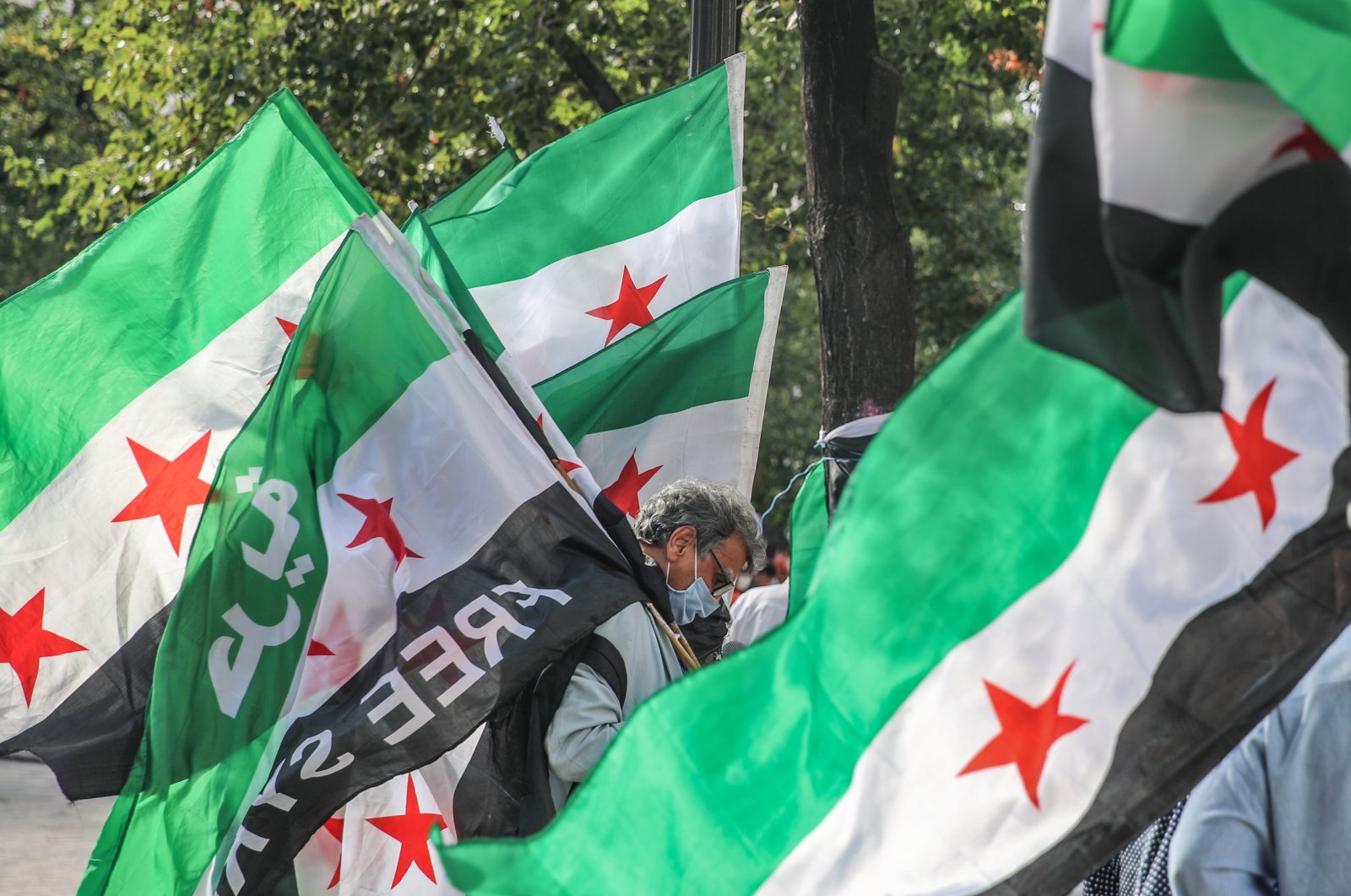 A Syrian activist carries the Syrian Revolution flag during a rally for the anniversary of 2013 Chemical Attack on Ghota, at Fontaine des Innocents in the Les Halles district in the 1st arrondissement of Paris, France. 21 August 2020. (EPA Photo)
by Anadolu Agency Sep 18, 2020 11:34 pm
RECOMMENDED

"We categorically reject both the baseless allegations of human rights violations claimed against the Syrian opposition, which operate on the ground to combat terrorism and ensure the return of Syrian refugees, and concerning our country in relation to them, as well as the groundless criticisms by the Office of the United Nations High Commissioner for Human Rights' (OHCHR) leveled against Turkey on the basis of the said allegations," said a Foreign Ministry statement.

"We note that the periodic report of the U.N. Independent International Commission of Inquiry (COI) on Syria for January-June 2020 established that the Syrian regime and the so-called 'Syrian Democratic Forces' which is affiliated with the PKK/YPG terrorist organization committed human rights violations amounting to crimes against humanity and war crimes against civilians," it added.

The statement emphasized that links between the PKK's Syrian offshoot YPG and the so-called Syrian Democratic Forces (SDF) had once again been clearly demonstrated in this latest COI report.

"However, failure to name PKK/PYD as the perpetrator of the terror attacks against civilians across northern Syria, which is known to everybody, is a major shortcoming."

The statement condemned the OHCHR's press release for failing to mention the Syrian regime and PKK/YPG, which it said are the true culprits of the reported violations.

"Our views and objections regarding the report will be transmitted to the U.N. in the strongest terms," it underlined.

Since the eruption of the bloody civil war in Syria in 2011, thousands of people died and millions fled the country or were displaced from their hometowns. Various terrorist groups such as the YPG/PKK and Daesh took advantage of the instability and chaos that has ensued since the conflict erupted to realize their terror activities. It has also led to one of the biggest refugee crises in history.

In its more than 30-year terror campaign against Turkey, the PKK – listed as a terrorist organization by Turkey, the U.S., and EU – has been responsible for the deaths of nearly 40,000 people, including women, children, and infants.