Turkey sends medical aid to the US to fight coronavirus pandemic 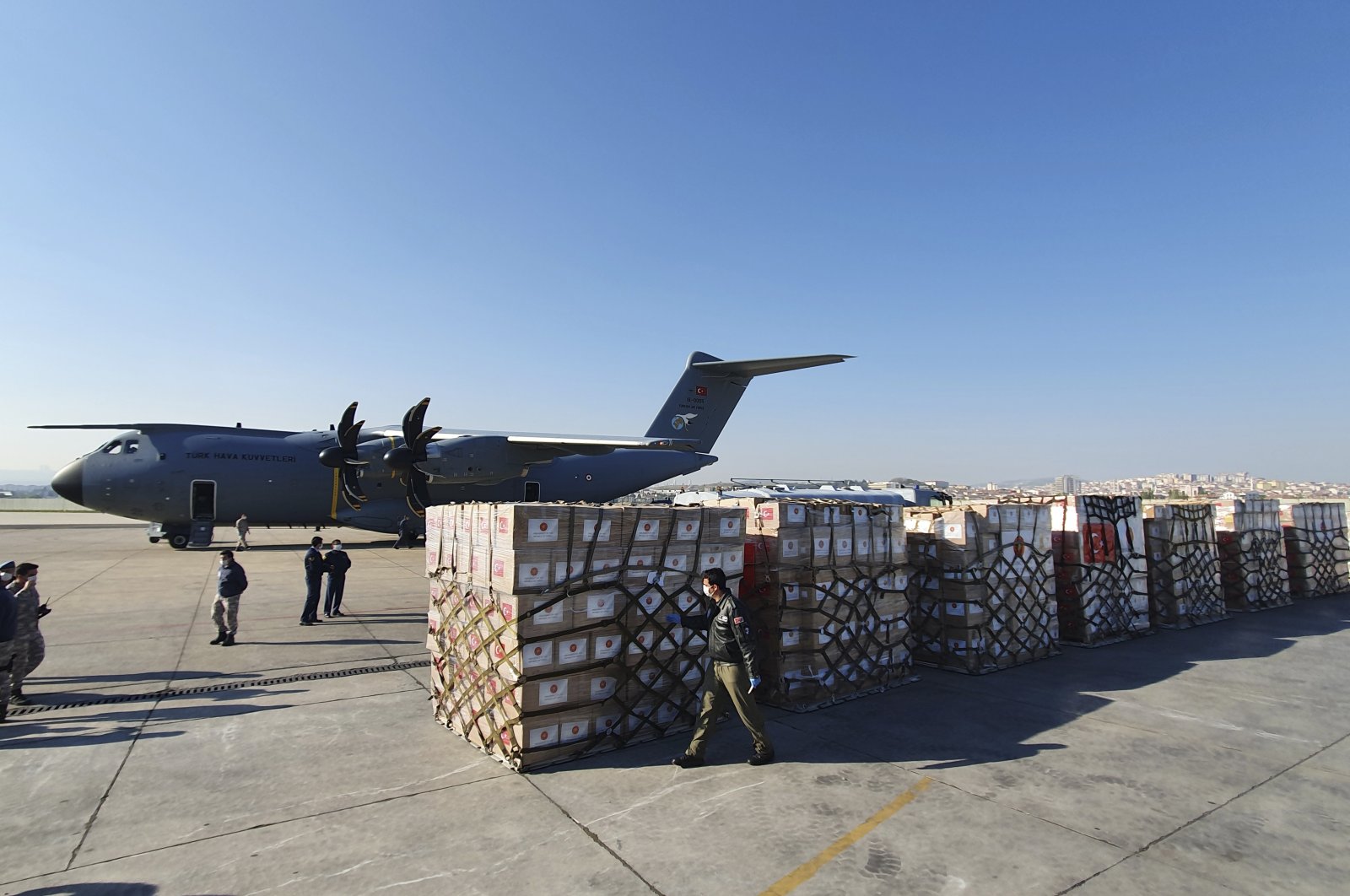 Turkey sent a military cargo plane containing medical supplies to the U.S. as the country is grappling with a shortage of necessary equipment as a result of the coronavirus pandemic

Military cargo plane “Koca Yusuf” took off from the Etimesgut Military Airport in Ankara after medical aid packages were loaded by personnel, according to the Defense Ministry.

U.S. Ambassador David Satterfield thanked Turkey for its “generous” donation, which is expected to reach Andrews Air Force Base near Washington, D.C.

“During times of crisis, like the worldwide effort to combat COVID-19, close coordination among like-minded allies and partners is key to developing a swift and effective response. None of us can do this alone,” Satterfield said in a statement.

He noted that the Federal Emergency Management Agency will distribute the aid to necessary areas across the country.

The ambassador also praised bilateral relations between the two countries for being strong and added that Washington looks forward to maintaining cooperation with Ankara on mutual priorities.

“Thank you, Government and People of Turkey, for your support and friendship to the American people,” the ambassador added.

Similar to the packages sent to the U.K., the U.S.-bound aid boxes also had a special note quoting 13th-century Sufi mystic Mevlana Jalaluddin Rumi: "Where there is ruin, there is hope for a treasure," written in English and Turkish.

President Recep Tayyip Erdoğan announced Monday that Turkey will send medical gear including protective suits and masks to the U.S. on Tuesday to help its efforts to contain the coronavirus outbreak.

"At a time when even developed countries are asking for Turkey's support, we have offered our support to a wide geography, from the Balkans to Africa," Erdoğan told reporters following a cabinet meeting.

"Most recently, we are sending medical aid to the United States on Tuesday, consisting of surgical masks, N95 masks, hazmat suits and disinfectants," Erdoğan said, adding that the shipment would be delivered via a Turkish military plane.

Meanwhile, Communications Director Fahrettin Altun said Turkey stands in solidarity with the U.S., its NATO ally, against the novel coronavirus.

"Turkey continues to deliver medical supplies to its friends and allies. We are proud to announce that 500,000 surgical masks and other PPE (personal protective equipment) will arrive at @Andrews_JBA tomorrow. We stand in solidarity with the United States, our NATO ally, against COVID-19, "Altun said on Twitter.

Turkey has received requests from 100 countries and has delivered aid to at least 57 countries so far to help them fight the coronavirus outbreak, including those badly hit by the virus such as the U.K., Italy, and Spain.

China was followed by Turkey's neighbor, Bulgaria, where 50,000 masks, 100,000 protective overalls and 100,000 protective glasses were delivered. Then, TL 72 million ($10.3 million) of financial aid along with thousands of units of medical equipment were sent to the Turkish Republic of Northern Cyprus (TRNC). Iran, one of the countries hit hardest by the virus, received 10,000 diagnosis kits, 4,715 overalls, 20,000 aprons, 2000 glasses, 4000 N95 masks and 73,000 three-layered masks. To Iraq, 30,000 masks were sent along with 475 food packages and disinfectants. Lebanon also received food aid with deliveries being distributed to more than 600 families in the poorest parts of the capital city, Beirut.

Turkey's aid packages mostly include medical masks, protective overalls, and gloves as well as disinfectants. All equipment was produced at military-owned factories and at sewing workshops that produce military uniforms and other clothing for the army.

Europe also received large medical aid packages from Turkey. Italy and Spain, two of the worst-hit countries on the continent, received packages on April 1. The U.K. and Ireland became other nations that accepted Turkey's aid deliveries. Multiple shipments have been sent to the U.K. over the past few weeks with the latest taking place a couple of days ago. Ankara helped to fulfill the protective overall needs of the virus-hit country. Ireland also received packages of aid filled with protective kits. Both nations expressed great gratitude to Turkey, with Ireland recalling the humanitarian aid the Ottoman Empire delivered 173 years ago, referring to Turkey's tradition of assistance.

Turkey has a long tradition of sending humanitarian aid to countries facing difficulties, even for those it has tense diplomatic relations with. For instance, back in 1938, only a decade after the country's foundation following a bloody war, Turkey sent medicine to China amid the outbreak of cholera in far-east Asia. Similarly, in 1941, Turkey sent medicine to the Greek army upon demand from Greece, a country that fought against Turkey during the liberation war. Similar aid has been provided to many other countries over the years, including Ethiopia, Bangladesh and Afghanistan.

Africa has also not been left alone, as several of the continent's countries received medical aid. On April 9, 400 hygiene packages were delivered to Guinea, while Somalia accepted its aid on April 17. Lesotho was another African country that received Turkish supplies.

After originating in Wuhan, China last December, the virus has spread to at least 185 countries and regions across the world, with Europe and the U.S. now being the worst-hit regions.

Globally, the virus has infected more than 3 million people and has claimed over 210,800 lives, according to figures compiled by the Johns Hopkins University of the U.S. More than 892,000 have recovered.