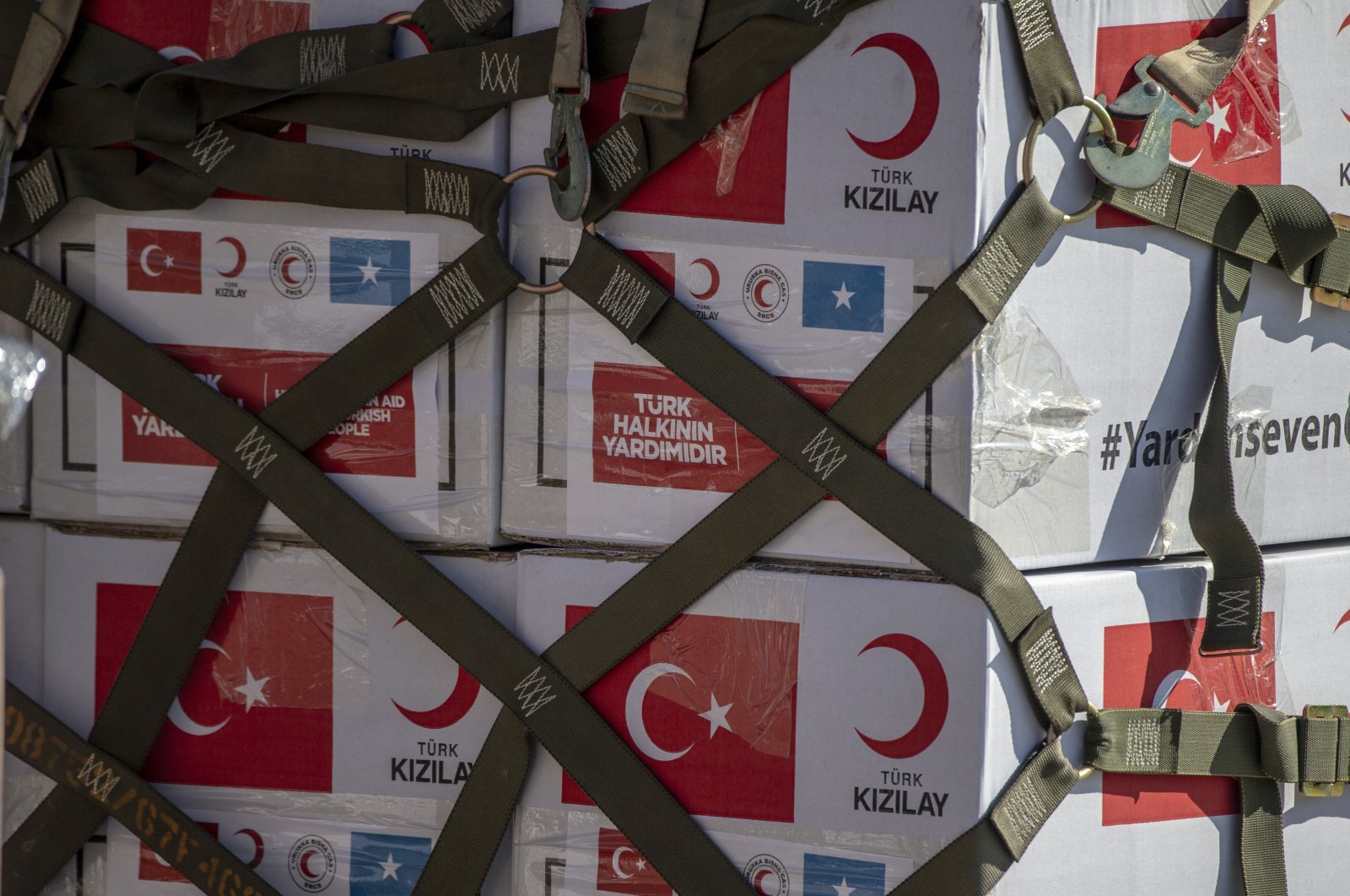 A delivery of medical equipment was made to Somalia on Friday as a military cargo plane headed to Mogadishu from Ankara, Friday, April 17, 2020. (AA)
by DAILY SABAH WITH AGENCIES Apr 17, 2020 1:14 pm
RECOMMENDED

Turkey continues to provide medical aid to virus-hit countries struggling to control the pandemic as the latest deliveries were made to Poland and Somalia on Friday.

Some 90,000 protective overalls were provided to Poland via four planes as a result of a video call between Deputy Foreign Minister Yavuz Selim Kıran and Poland's Foreign Ministry undersecretary, Marcin Przydacz, during which the two diplomats agreed on medical aid delivery to the virus-hit country. Kıran and Przydacz also agreed to pursue this partnership in the fight against the coronavirus in the upcoming days.

After the delivery of overalls, Poland's envoy to Ankara, Jakub Kumoch, shared a message from his Facebook page, expressing gratitude to both countries' health and foreign ministries.

Currently, there are 8,214 confirmed cases in Poland, with 318 dead due to the pandemic.

Another delivery of medical equipment was made to Somalia on Friday as a military cargo plane headed to Mogadishu with products prepared by the Health Ministry and the Turkish Red Crescent. There are 80 confirmed cases of COVID-19 in Somalia so far, with five people dead.

On Thursday, the Turkish Cooperation and Coordination Agency (TİKA) provided Somaliland cleaning and hygiene equipment to be used in 12 state hospitals and six temporary hospitals on Thursday, as Turkey continues to support countries across the world in the fight against the coronavirus.

Struggling to bring the pandemic under control, the Somaliland government was in immediate need of hygiene equipment to be used in hospitals. In order to support the country, Turkey provided 2,400 liters of antiseptics, 4,800 liters of bleach and 1,280 liters of disinfectants to Somaliland's Health Ministry.

The virus has spread to 185 countries and regions since emerging in China last December, with the United States and Europe being the world's hardest-hit areas.

Over 2 million cases have now been reported worldwide, with the death toll exceeding 147,000 and more than half a million recoveries, according to figures compiled by the U.S.' Johns Hopkins University.

Turkey, as a country that has made a name for itself in the last decade due to its humanitarian efforts, has already gained prominence by sending medical aid packages to many countries across the world.

"So far, we have delivered medical equipment to 34 countries," President Recep Tayyip Erdoğan said Monday during a news conference following a Cabinet meeting in Istanbul. "We will continue our support (to other countries) in the upcoming days as well," he said.

Erdoğan's speech was an evaluation of the past month, during which Turkey has received aid requests from more than 90 countries. Managing to deliver medical equipment to 34 of them so far, the country has provided consultancy to many others, aiming to share its resources and experiences with the world in a period of crisis. Turkey's aid packages mostly include medical masks, protective overalls and gloves, as well as disinfectants. All equipment was produced at military-owned factories and at sewing workshops that produce military uniforms and other clothing for the army.

Turkey has a long tradition of sending humanitarian aid to countries facing difficulties, even for those it has tense diplomatic relations with. For instance, in 1938, only a decade after the country’s foundation following a bloody war, Turkey sent medicine to China amid the outbreak of cholera in Asia. Similarly, in 1941, Turkey sent medicine to the Greek army upon the request of Greece, a country that fought against Turkey during the Turkish War of Independence. Similar aid has been provided to many other countries over the years, including Ethiopia, Bangladesh and Afghanistan.