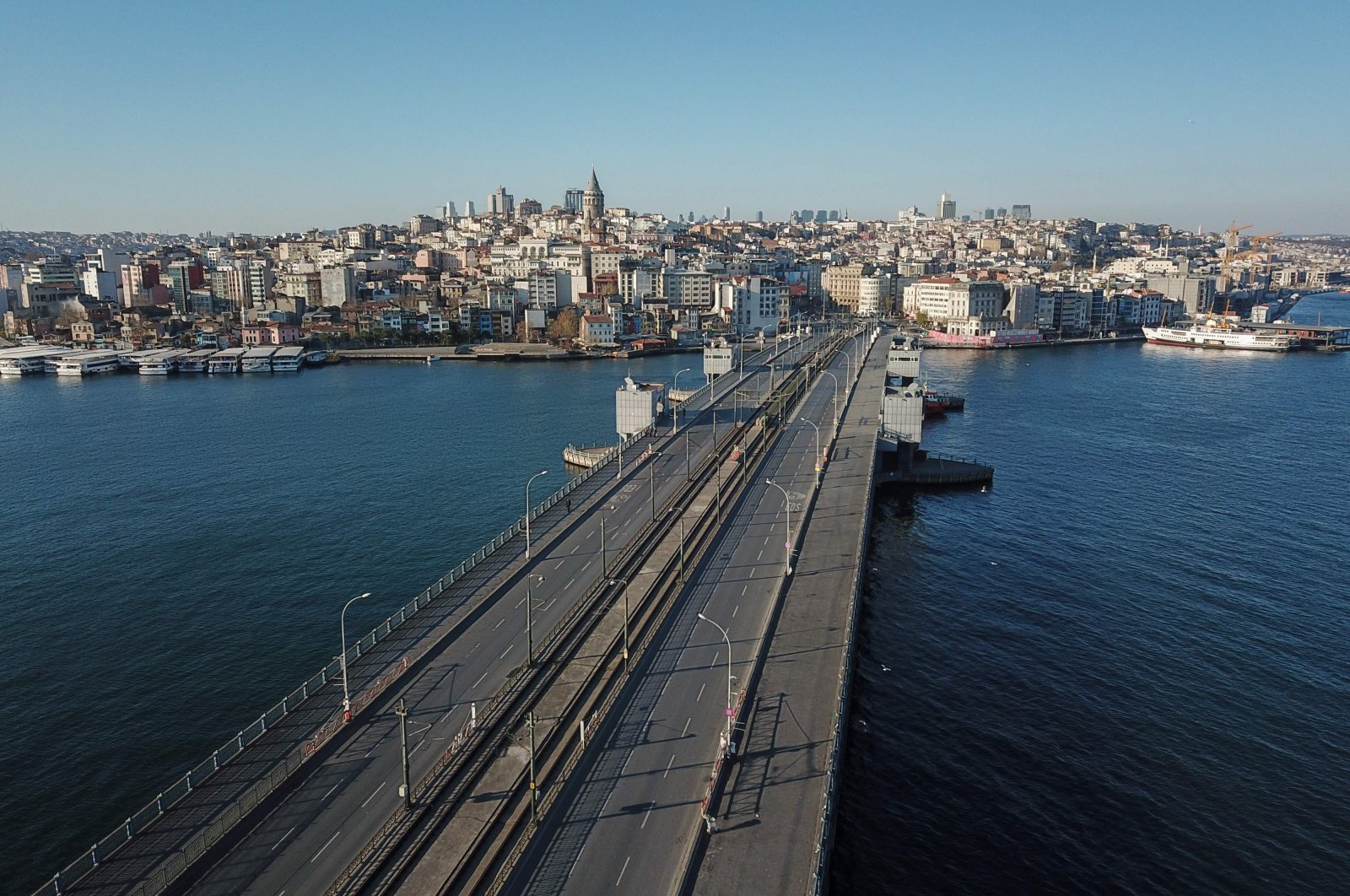 The Galata bridge and the Galata Tower in Istanbul on April 12, 2020, during a two-day curfew to prevent the spread of the epidemic COVID-19 caused by the novel coronavirus. (AFP Photo)
by DAILY SABAH Apr 13, 2020 3:59 pm
RECOMMENDED

Turkey will impose a curfew once again over the coming weekend, between April 17-19, as part of measures to curb the spread of the coronavirus, President Recep Tayyip Erdoğan said Monday.

The announcement came after Erdoğan convened a Cabinet meeting over teleconference, with Turkey's fight against the coronavirus at the top of the agenda.

“Our goal is to protect citizens who might otherwise give in to the temptation provided by the good weather, from the dangers of coronavirus. I would thus like to announce ahead that we will impose a curfew starting midnight April 17 and ending Sunday midnight,” Erdoğan said.

Commenting on scenes of citizens clamoring to get last-minute supplies in stores and bakeries across the country following last weekend's surprise announcement, Erdoğan said all necessary precautions would be taken to avoid similar scenes.

Following criticism about the timing of the announcement, Interior Minister Süleyman Soylu on Sunday submitted his resignation although this was duly rejected by Erdoğan.

“I appreciated our interior minister’s sensitivity to the issue but I have requested him to continue his job and rejected his resignation,” Erdoğan said after the Cabinet meeting and praised Soylu for his successful work in the fight against terror and his response to various disasters Turkey had faced in the past few months.

Regarding the current status of Turkey’s fight against the coronavirus, the president said Turkey was doing well compared to other nations.

“We are among the top five countries in terms of the daily and total number of tests that have been conducted. There has been a downward trend in confirmed cases relative to an increase in the tests carried out. We are number one in terms of countries with the lowest mortality rate. The number of patients who have recovered has neared 5,000,” Erdoğan said, adding that Turkey’s efforts had been largely praised by international organizations.

“The World Health Organization and other groups hold our country up as an example. Not only are we protecting our own citizens, but we are also helping our neighbors as much as we can. We have lent a helping hand to 34 countries by providing medical supplies. We will continue to do so,” he said.

Erdoğan said two new hospitals would be built in order to increase the country's capacity to deal with the ongoing crisis, while Istanbul's Başakşehir City Hospital, with a bed capacity of 2,800, would be partially opened on April 20.

“The hospital will begin full service on May 15, with the number of intensive care units (ICU) numbering 456,” Erdoğan added.

Regarding the number of ICUs in Turkey, Erdoğan said the average number of ICU beds for 100,000 people in Turkey was around 50, while Europe’s average came to just 12.

Turkey has imposed increasing restrictions on daily life in an effort to slow the spread of COVID-19 disease. Though an early response to the crisis has stemmed the tide of infections, the country has had mixed success in limiting public mobility, especially on weekends and given rising temperatures.

With this in mind, a weekend curfew was declared Friday in 31 mainly urban provinces.

"We have seen a decrease in the number of intubated patients," Koca earlier said in a tweet, adding that more tests lead to more diagnoses and quarantines.

Turkey already had a curfew in place for those above the age of 65 and those under 20, yet stopped short of a full lockdown. The government has, until this weekend, relied on the public’s compliance with calls for self-isolation. Authorities have called on people repeatedly to impose their own quarantine or lockdown measures.

Turkey was one of the first countries to take measures against the coronavirus, closing its border with Iran and halting flights from China and Italy. It has since shut down all international arrivals, restricted domestic flights and set up road checkpoints outside cities to prevent nonessential travel.