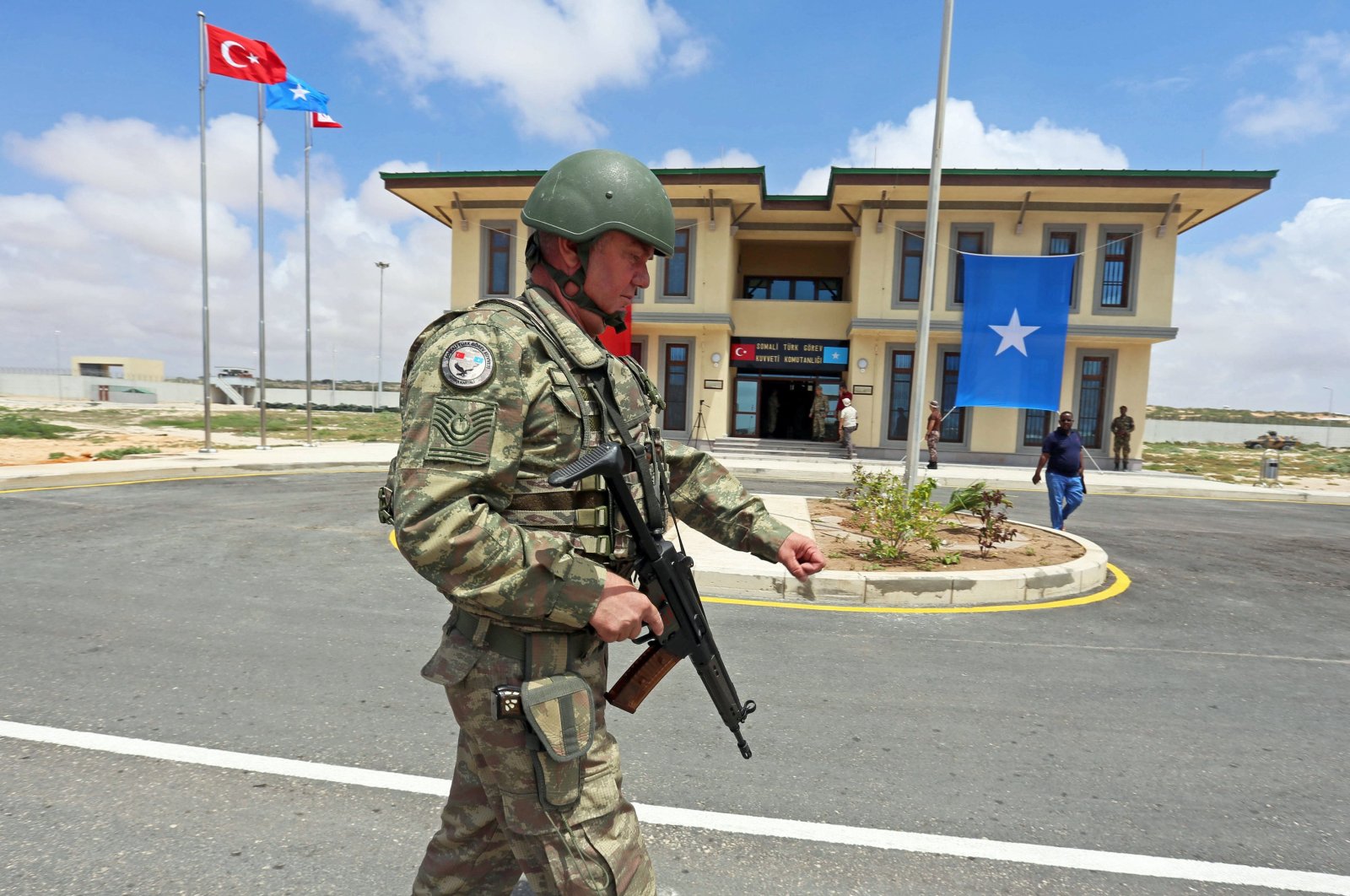 A Turkish soldier is seen on patrol at Camp TURKSOM military training base in Somalia's capital Mogadishu in this undated photo. (AA Photo)
by DAILY SABAH Aug 04, 2020 3:09 pm
RECOMMENDED

Turkish-Somali relations have experienced great success over the years, and as part of their strategy of cooperation, Turkey has trained one-third of the Somali military forces.

Turkey’s Ambassador to Mogadishu Mehmet Yılmaz told Anadolu Agency (AA) in remarks regarding bilateral relations, “When we look at the total numbers, Turkey will have trained one-third of Somali military forces, estimated to be around 15,000-16,000 personnel."

In addition to military cooperation, Yılmaz also touched other areas of the countries' partnership, including health and education.

The envoy underlined that historical relations between Turkey and Somalia have dated back many years but began to develop further after President Recep Tayyip Erdoğan’s official visit to Mogadishu in 2011, when the country was struggling with a drought.

“The visit by our president in 2011 to Somalia changed the fate of this country and took the bilateral relations to a new level,” Yılmaz said. He said Somalia "came under the spotlight" following President Erdoğan’s visit, noting that Somali sympathies toward Turkey and the Turkish people continue.

Underlining that Erdoğan became the “only non-African leader to visit Somalia in 20 years,” the ambassador said Erdoğan’s message of solidarity was received with happiness by the Somali people.

The ambassador added that Turkey has been continuing its support to Somalia with humanitarian aid according to the country's current needs, in the areas of health, education and security.

Regarding military cooperation between the two countries, Yılmaz said Turkey's involvement in Somalia is of “critical importance.”

“Turkey’s military cooperation with Somalia is of critical importance for this country. It contributes to Somalia’s security and its fight against terror,” he said.

Stating that the international community’s biggest expectation from Somalia is the training of units that will ensure safety in the country, he noted the debates regarding the possible withdrawal of the African Union Mission in Somali's (AMISOM) forces from the country.

“The withdrawal of AMISOM forces is being debated nowadays. In fact, the Somali Transition Plan, which was put into effect for directing the reconstruction efforts by the state, also envisions this. Within the scope of this, last year and this year the number of AMISOM troops have been decreased by 2,000. But the realization of the plan depends on the creation of Somali’s own local security forces,” Yılmaz said.

“I can say with clarity that the country that provides the contribution of the highest quality is Turkey,” he said.

Saying that sergeants and noncommissioned officers, who will make up the backbone of the Somali military, are being trained in the Camp TURKSOM, a defense university and a Turkish military base, the ambassador added that the training provided is high-quality commando training.

“They first receive initial education in Somali. After that, they are sent to Isparta province (in Turkey) for commando training. After it ends, they are transferred to the Somali military,” Yılmaz said.

Yılmaz added that Turkey managed to overcome and contain the coronavirus outbreak at the military base, all the while continuing to provide training. The ambassador said at least 1,000 special police officers will have been trained by Turkey.

The envoy also touched upon the fight against the Gülenist Terror Group (FETÖ) and said Somalia was the first country to end FETÖ activities after the July 15 failed coup attempt.

“Maarif did a very good job in Somalia. The foundation is making efforts to develop the two schools it has taken over here. These schools are in high demand. There is another school that Maarif has taken over in Somaliland too. Our teachers are successful,” he added.

Yılmaz also rejected allegations that Turkey demanded soldiers from Somalia for its efforts to help Libya’s U.N.-recognized Government of National Accord (GNA) in its fight against putschist Gen. Khalifa Haftar’s forces.

“Social media is very powerful in Somalia. We are observing the efforts of some countries to manipulate the area for their interests. We see this as a targeted effort. Those allegations are not true. There is no truth to these claims,” the ambassador said.