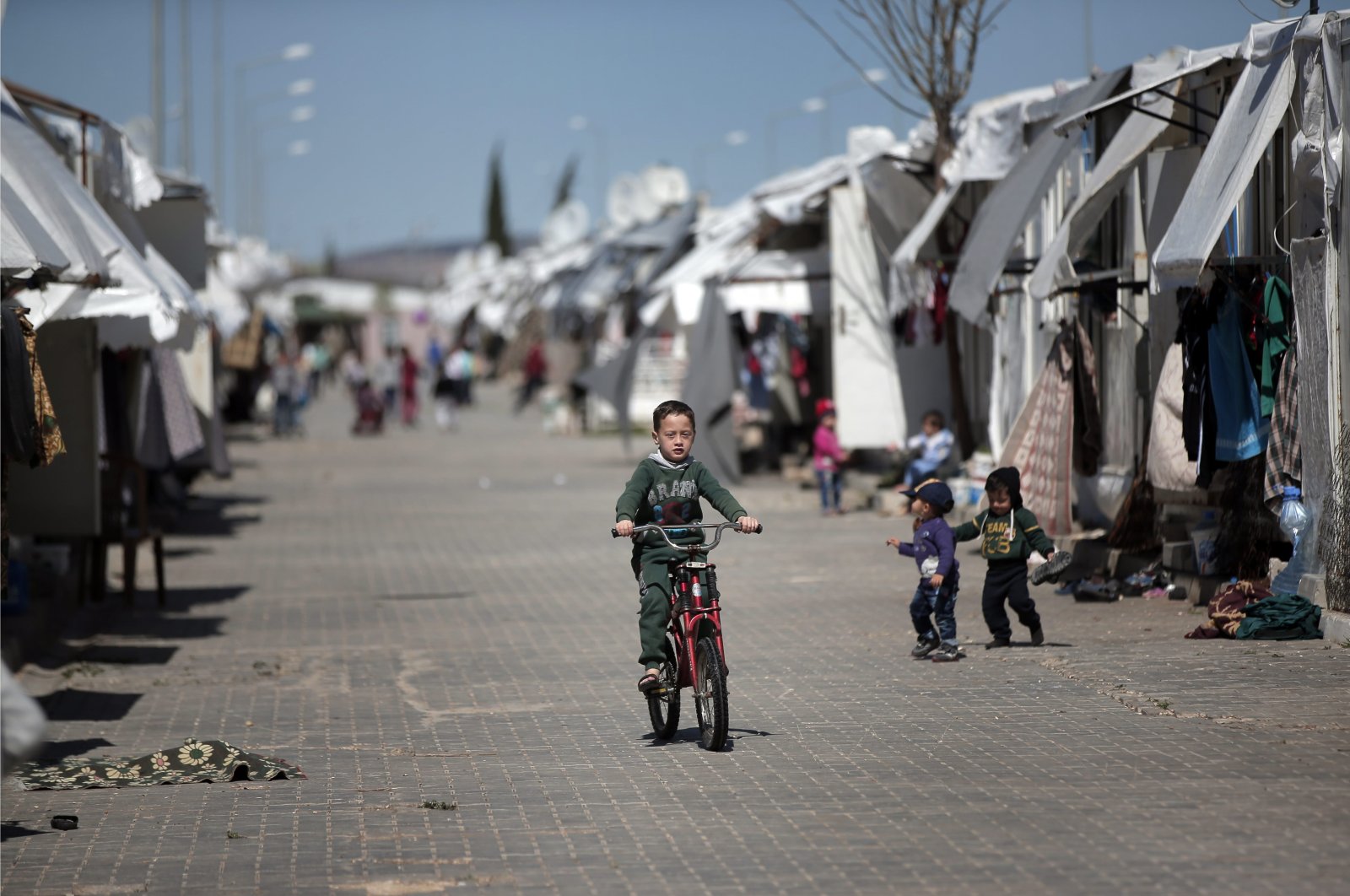 A Syrian refugee child rides his bike at the Öncüpınar Camp for refugees next to the border crossing with Syria in Turkey's Kilis province, March 17, 2016. (AP File Photo)
by DAILY SABAH WITH AGENCIES Jun 26, 2020 11:32 am
Edited By Nurbanu Tanrıkulu Kızıl
RECOMMENDED

Turkey hosted the highest number of refugees in 2019, followed by Pakistan, Uganda, Germany and Sudan, according to new data released by the Malta-based European Asylum Support Office (EASO) on Thursday.

Turkey currently hosts more than 3.5 million Syrian refugees, more than any other country in the world, and has spent $40 billion throughout the process, according to official figures.

Ankara has frequently criticized the lack of financial and humanitarian support from the international community for refugees living in the country and has warned the European countries about the possibility of new migration waves.

The agency said that "a key dimension of the EU approach to address the Eastern Mediterranean route is the partnership with Turkey through the EU-Turkey Statement" reached in 2016.

EASO noted that while the COVID-19 emergency has led to an 87% drop in applications in recent months, the overall increasing trend is expected to resume later this year as travel and safety restrictions are gradually lifted.

Syria was the top country of origin in 2019, while Germany, France and Spain received the highest number of applications.

The figures include EU countries as well as Norway, Switzerland, Iceland and Liechtenstein.

The report also stressed that some European countries such as Cyprus, France, Greece, Malta and Spain received more asylum applicants in 2019 than during the migration crisis of 2015.

Most of the countries responded to the surge in asylum requests and changing migratory patterns by introducing new measures or practices to address the migrant flows, disembarkations and rising backlogs of pending cases, EASO said.

Despite that, the first-instance procedures remained lengthy in most countries, frequently extending past the six-month legal time limit, it added.

"The number of pending cases still awaiting a decision at the end of 2019 remained much higher compared to the pre-2015 level, illustrating the pressure under which asylum and reception systems are still operating," EASO said.

The agency noted, however, that backlogs were reduced in early 2020 following temporary office closures due to COVID-19 safety measures. At the end of March, there were about 836,000 pending cases, an 8% drop compared to the end of December 2019.

In 2019, France, Germany and Spain received more than one-half of all applications, followed at a distance by Greece. For the sixth consecutive year, Germany continued to receive the highest number of applications, at about 166,000.

Italy instead received far fewer applications — about 44,000 in total — for the second consecutive year, due to significantly reduced irregular migration across the Central Mediterranean.

The Western and Central Mediterranean routes had fewer arrivals compared to 2018, while the Eastern Mediterranean and Western Balkan routes experienced increased arrivals.

Afghanistan and Venezuela-together with Colombia, El Salvador and Peru-accounted for most of the increase in applications for international protection in 2019. Most asylum applicants were Syrians, Afghans and Venezuelans.

At a global level, the 6.6 million refugees from Syria made up approximately one-third of the global refugee population, followed by Afghanistan and South Sudan, with 2.7 million and 2.2 million respectively, the report showed.