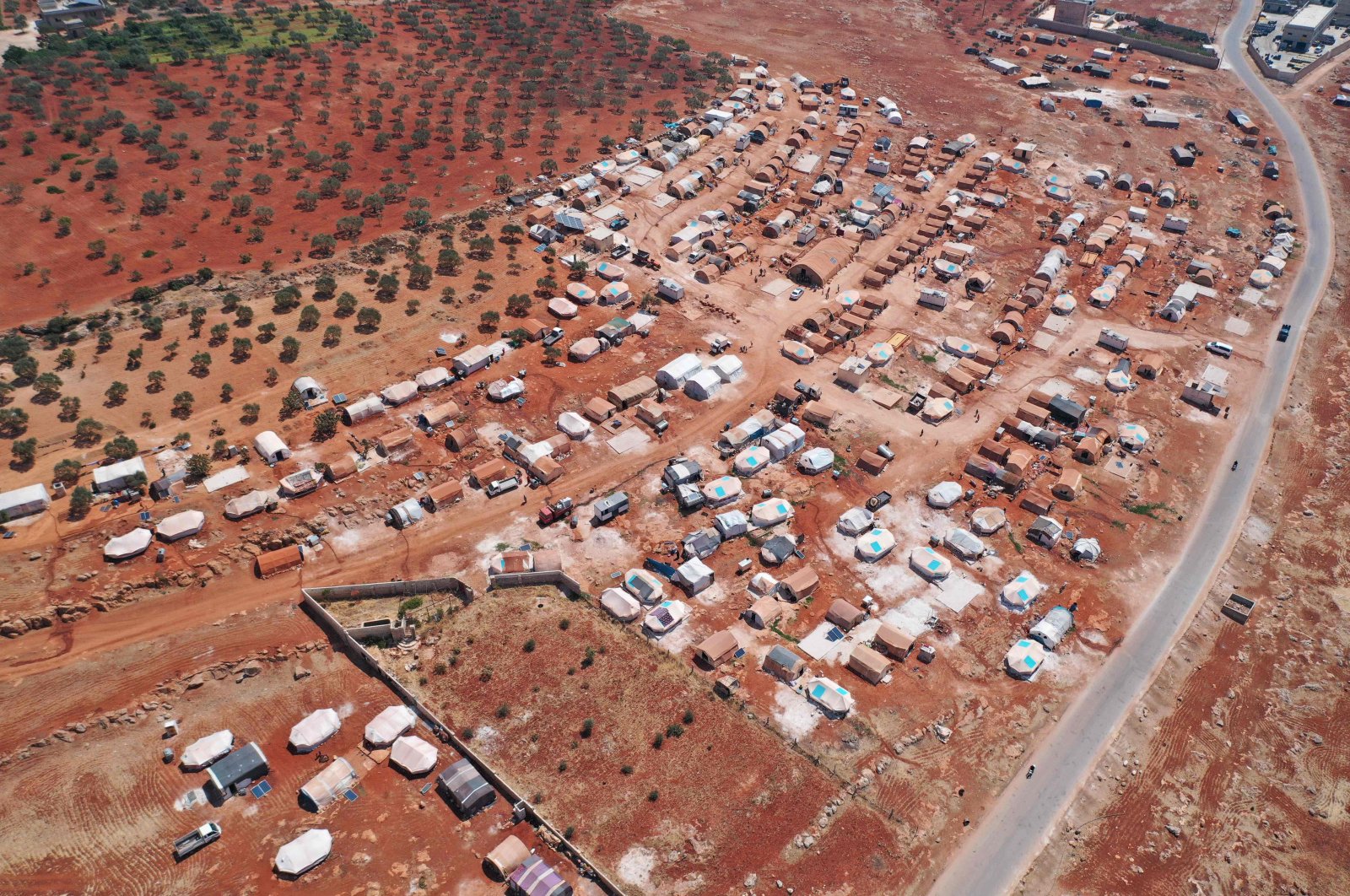 An aerial view of a camp for displaced Syrians near the town of Maaret Misrin in Syria's northwestern Idlib province, July 11, 2020. (AFP Photo)
by DAILY SABAH WITH AGENCIES Jul 13, 2020 11:46 am
RECOMMENDED

Turkey on Monday welcomed the extension of cross-border U.N. humanitarian aid deliveries to Syria by another year.

"The U.N. mechanism in question plays a vital role in providing around 2.8 million vulnerable people in northwestern Syria with humanitarian aid," the Foreign Ministry said in a statement.

"In this respect, it is seen as important to maintain the mechanism even though it is reduced to one border gate," the ministry said, referring to the adoption of an extension of the U.N. Security Council's authorization in cross-border aid to Syria on July 11.

The 15-member council reduced the number of gates for aid deliveries from Turkey to Syria to one, with only the Bab al-Hawa border crossing, near the Cilvegözü crossing point, to remain open for aid delivery for another year.

Authorization for the continued transport of aid to Syria, a system in place since 2014, expired on Friday night after Moscow and Beijing used their veto power and the Council then rejected a counterproposal from Russia. With the approval of the German-Belgian proposal Saturday, the Bab al-Hawa crossing point on Syria's northwestern border with Turkey will be maintained for a year, until July 10, 2021.

Russia, the Assad regime’s key ally, and China argued that the U.N. authorization, allowing aid to be distributed without permission from Damascus, would be a violation of the latter's sovereignty.

It noted that excluding the route from the mechanism would make it harder to provide around 1.3 million civilians in Syria's Aleppo region with humanitarian aid as well as increasing the responsibility Turkey has undertaken since the start of the civil war in neighboring Syria.

"In this context, Turkey will continue to make efforts to maintain humanitarian aid activities to Syria without a halt," it said, adding the country would coordinate and cooperate with the U.N. and relevant institutions in order to overcome the additional challenges caused by the change.

Hundreds of thousands of vulnerable Syrians in northern Aleppo used to get U.N. assistance through the now-closed Bab al-Salam gate. Around 2.8 million people in northwestern Idlib will, however, continue receiving aid through the Bab al-Hawa, which will remain open.

Another reaction on the recent U.N. decision came from Brussels as the European Union Sunday voiced "deep concern" at the move to close an access point for humanitarian aid to war-torn Syria.

"It is a matter of deep concern that the resolution adopted after repeated vetoes by Russia and China authorizes only one crossing point out of the two previously available to the U.N.," Borrell and Lenarcic said in a joint statement.

"The unconstructive approach of certain members of the Security Council is all the more regrettable at a time when needs have never been greater and in the context of the coronavirus pandemic," they added.