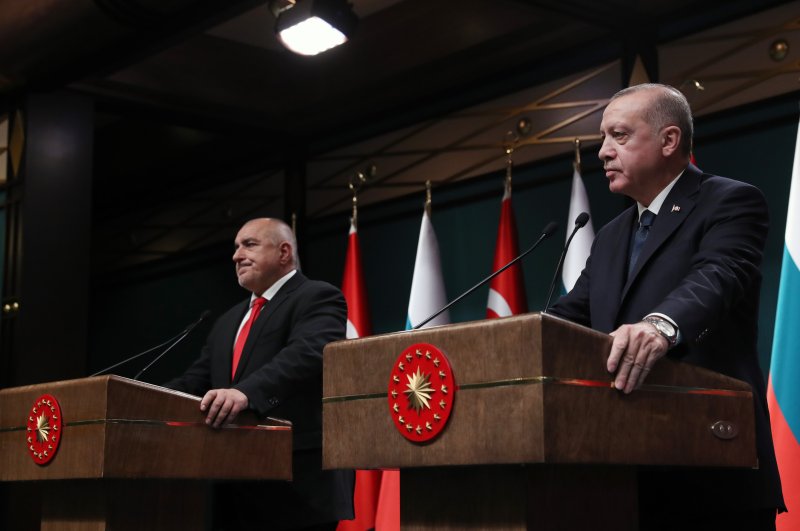 Bulgarian Prime Minister Boyko Borisov (L) and President Recep Tayyip Erdoğan during the news conference on March 2, 2020, at the Presidential Complex in Ankara. (AA Photo)
by DAILY SABAH
Mar 03, 2020 12:16 am

Turkey will not continue to take care of millions of Syrian refugees for another nine years, despite what Europeans may think, President Recep Tayyip Erdoğan warned Monday.

“The Europeans think that Turkey will continue to take care of the refugees for another nine years. Such a thing will not happen,” Erdoğan said during a news conference with visiting Bulgarian Prime Minister Boyko Borisov.

“Turkey has fulfilled all its responsibilities when it comes to Syrian refugees. But the EU has failed to abide by the March 18 declaration and continues to implement double standards,” he said in a harsh critique of the bloc.

“We have already spent $40 billion for refugees so far. We demand the EU take a fair share of the burden. We do not even want the promised 1 billion euros anymore,” he added.

“I honestly cannot understand why the EU didn't provide the financial support it promised. The crisis can only be solved with common sense and abiding by the requirements of the agreement. One of the core principles of the EU is sharing the burden,” Borisov said.

President Erdoğan also mentioned the conditions that the refugees are experiencing on the Greek border.

“Refugees are in an inhumane situation on the Greek border. I hope EU officials will witness this fact when they inspect the area. According to international law, you cannot hold a person in a country against his or her will. Those who want to go may leave. And Europe has no choice whatsoever – it has to take the refugees in,” he underlined.

Erdoğan slammed Greece for having "no respect for international law."

“If hundreds of thousands of civilians are on Europe's doorstep, this is for a reason. The EU fails to keep its promises. The fact that Greek soldiers killed two civilians today and wounded another especially harmed the process,” he concluded.

Attacks by the Assad regime have killed 55 Turkish soldiers in the past month in Idlib. President Erdoğan has threatened to push back Assad forces if they do not pull back to pre-determined lines. Regime airstrikes targeting Turkish troops have heightened tensions between pro-opposition Turkey, Assad and its ally, Russia.