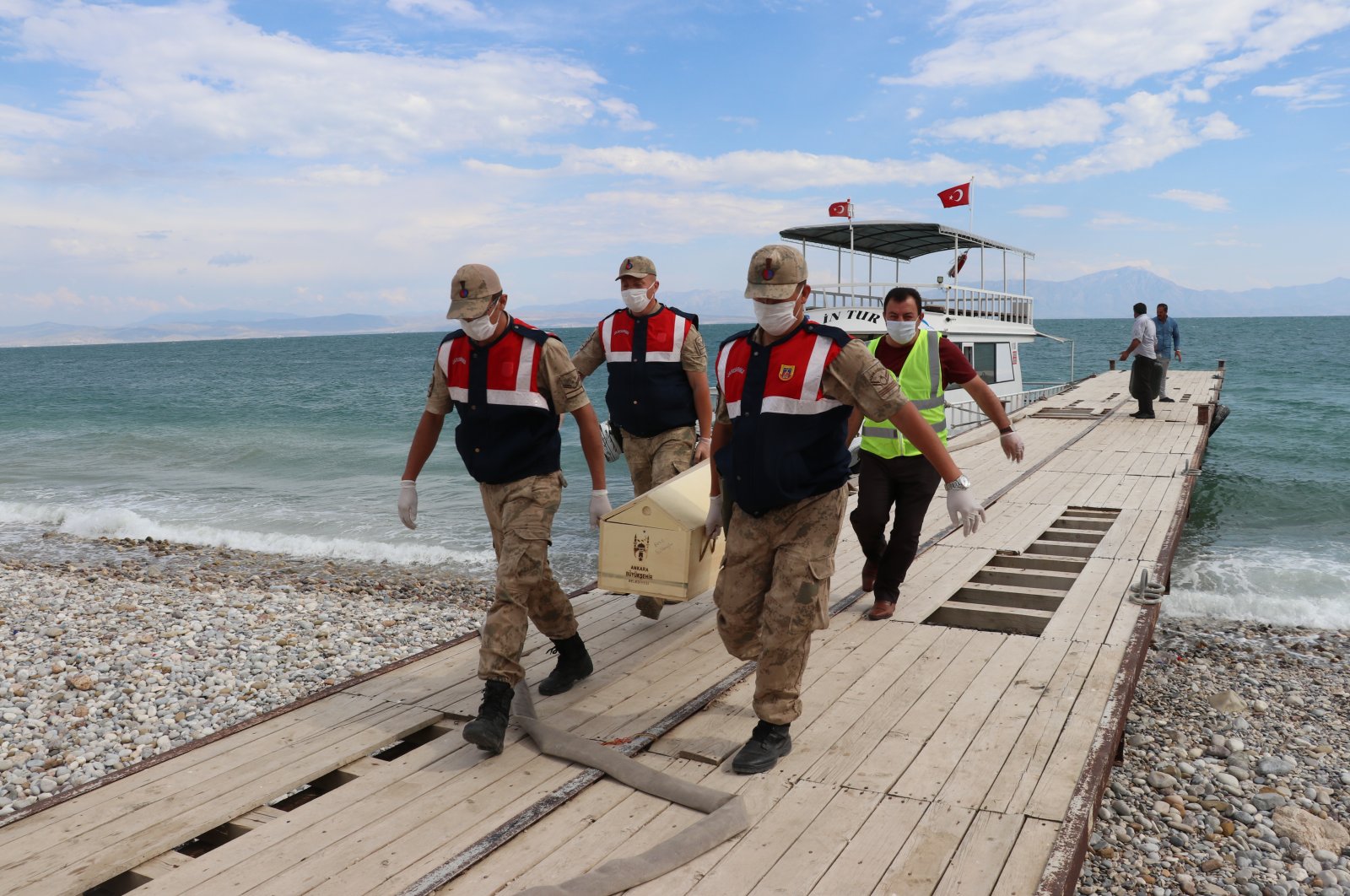 Members of Turkish security forces carry a recently recovered body of a migrant amid sinking of a migrant boat in Lake Van, July 13, 2020. (AA)
by DAILY SABAH WITH AA Jul 13, 2020 2:13 pm
RECOMMENDED

Turkey's Lake Van has become a route favored by people smugglers seeking to avoid security checks, putting the lives of refugees desiring a better life in Europe at risk, given the hazardous lake and dangerous mountain passages that must be traversed. The very real dangers of the route have revealed themselves recently, after the bodies of 32 refugees were found following the sinking of a boat on the lake on June 27.

The migrants, mostly from Afghanistan, Pakistan, Bangladesh and other South Asian countries, arrive in Turkey either to start a new life or to use the country as a springboard into Europe. Entering Turkey usually from the Iranian border, migrants smugglers often treat the neighboring province of Van as a collecting center for asylum-seekers.

Attempting to move to the western parts of the country or to Europe from here, migrants pay heavy fees to the smugglers, only to be left traveling in unsafe, often inhumane conditions.

Although the land route was traditionally much preferred, since security measures on the roads have increased, smugglers have begun seeking alternatives in order to avoid checkpoints.

Mountain passes and side roads along the countryside have become more popular since, while migrants are even forced to go part of the route on foot to hide from security forces. Lake Van has also been included in the route as a more lucrative alternative for people smugglers since it enables migrants to reach the eastern Bitlis province without crossing through several security checkpoints in Van.

Smugglers carry migrants to Bitlis on small fishing boats setting off from discrete areas along the coast in return of an average of $100 per person. No regard is taken for security measures, even a life jacket. Furthermore, the boats, which have the capacity to host 15 people at most, are often forced to carry many more, making the 70-kilometer trip all the riskier.

In one of the latest attempts to carry migrants illegally to the west, on June 27, a migrant boat carrying 60 people sank. The boat, which was reported as having been unlicensed for sailing since 2009, was found 10 days after the incident with 32 dead bodies having been recovered from the lake. Many of the migrants are still missing.

This is not the first time that taking the dangerous route has ended in tragedy. Back in Dec. 26, 2019, seven migrants were killed after a boat capsized in the lake. The boat, with its 15-people capacity, was reportedly carrying 71 people.

However, boating accidents are not the only cause of death along the route. On Feb. 9, 2020, migrants intending to go to Bitlis via Lake Van, was left in a rural area in Van's Gevaş district. Having almost frozen to death, the migrants were rescued at the last minute by security forces after a tip-off was received.

In another incident on July 18, 2019, a bus filled with 66 migrants packed in tightly retracting its seats, suffered an accident on the mountain way, killing 17 and injuring 50.

Migrants themselves have also addressed the difficulties they face during the illegal route in various testimonies. Surviving the capsize of a boat last year, one Pakistani migrant going by the initials A.B. said in his testimony that in Iran, he paid $600 to a group of smugglers to be taken to Turkey.

"I got to Iran by my own efforts. In Iran, I paid $600 to people who were not speaking the same language as me. They brought me to Turkey, where we were handed to another group. In Van, we, 70 people, all stayed in the same place. Then they told us that they would take us to Istanbul via Lake Van, where we got on to a boat and sailed for four to five hours. But just 20 meters left to the coast, the boat started to shake and suddenly capsized. We had to swim to the coast to survive," the migrant explained, adding that they were then taken by onto a bus that was halted by gendarmerie forces in the Adilcevaz district.

Afghan migrant Perisa Tajik, who survived a bus accident last year, recalls that although they asked the driver to stop, he refused to listen before the accident struck. "There were no spaces left in the vehicle. We asked the driver to stop a few times but he did nothing. The vehicle was completely full, and we could not even breathe. Every time he hit the brakes, we all fell to the front. There were also children. I don't know what happened to them," she said.

Recovery operations were suspended on July 13 due to poor weather conditions.

Earlier this month, three suspects were remanded in custody over the sinking.

Since the start of the coronavirus outbreak, the number of irregular migrants arriving in Turkey has declined.

However, more than 21,000 migrants have reached Van so far this year, according to Interior Minister Süleyman Soylu.