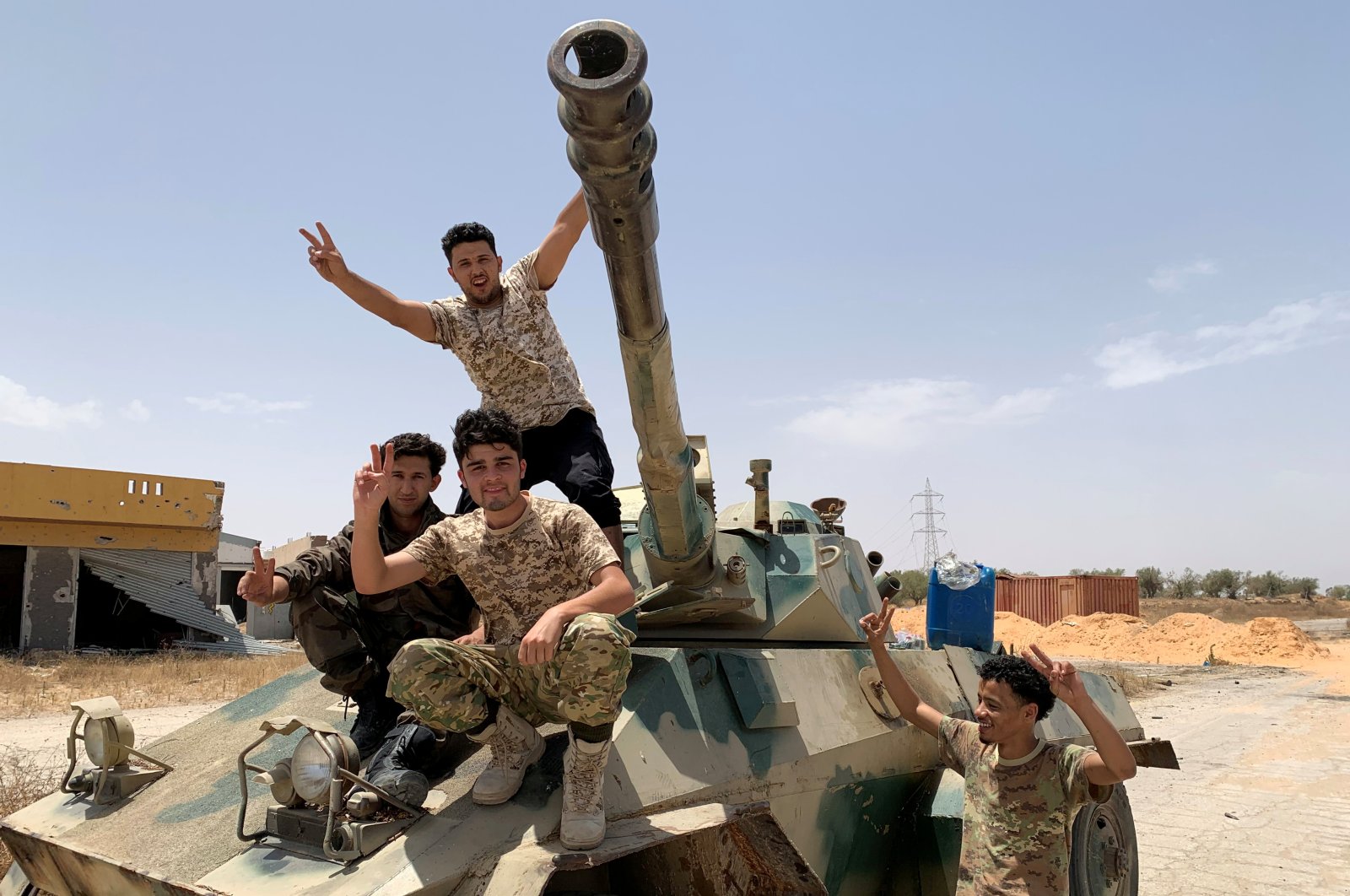 According to a Libyan government statement, the drones targeted a field hospital in the Abu Qurayn region.

No injuries or casualties were reported, but material damage has taken place as a result of the attack, the government said.

Meanwhile, protection and security units in Sirte and the city of Jufra said on Facebook that the districts of Jarif and al-Kibeybe were cleared of Haftar militias.

It added that the districts were liberated as part of the operation, "Path of Victory," launched Saturday.

The army launched the operation to capture Sirte, Jufra and towns in Wadi Wishka, Buerat, Jarif and Qasr Abu Haid from Haftar forces.

It liberated the Wadi Wishka area on the outskirts of Sirte.

The move came a day after it liberated the strategic city of Tarhuna – the last stronghold of Haftar in western Libya.

On Friday, the Libyan Army liberated the town of Tarhuna shortly after entering the city center, with little resistance from the militias. Tarhuna was the main rear base for the offensive against Tripoli that Haftar's forces finally abandoned this week, retreating from their remaining positions in the southern suburbs of the capital.

Meanwhile, Haftar’s spokesman Ahmad al-Mismari said some countries have "disappointed them," as he claimed the Libyan Army did not retake control of Tarhuna due to their "weapons strength and military superiority."

"These countries saw themselves as the guarantor to stop the (Libyan Army’s) advance ..." al-Mismari told the Saudi broadcaster, Hades TV.

Haftar is supported by neighboring Egypt, the UAE and Russia. The UAE has also spent a fortune supporting Haftar, despite his failures. Although there has been an international arms embargo on the war-torn country in place since 2011, the Persian Gulf nation has been continually looking for ways to get heavy and strategic weapons to Haftar and his forces in eastern Libya to overthrow the government since 2014.

According to analyst Muhammad Pervez Bilgrami, one of the reasons for the UAE’s failure in Libya is because it solely relies on foreign weapons and mercenaries to fight in Libya. Furthermore, Bilgrami says the mercenaries hired by the UAE are "only good for creating terror" as they are poorly trained.

"Captured Sudanese mercenaries accused the UAE of recruiting them to work as security guards in the Emirates but deployed them on the Libyan war front," he said.

Bilgrami also says the Libyan Army’s success could easily be attributed to Turkish support, which has key technological advantages over the UAE.

"Turkey’s Medium Altitude Long Endurance (MALE) armed drones TB-2, Anka-B and Anka-S have hit Haftar’s forces hard and shifted the balance in favor of GNA," Bilgrami said, adding that other air defense systems and jammers and warfare systems used by Turkey have all contributed to the retaking of Tripoli from Haftar.

On a different note, a Libyan government source revealed new details Sunday on the case of two Russians detained since May 2019 for spying.

"The Libyan intelligence (service) is the one who referred the case on the two spies – Maxim Shugalei and Samir Seifan – to the Public Prosecution after they were charged with actions that harmed the State's security," a government statement said.

The statement said the two men are working for a Russian media company owned by Yevgeny Prigozhin, who heads Russian private military contractor, Wagner Group, and used to send daily reports to their superiors on the economic and military situation in Libya.

The statement also accused them of having met with fugitive Saif Gadhafi, a son of the late Libyan leader Moammar Gadhafi, for a lobbying firm ahead of the upcoming presidential elections in Libya.

It said the two Russian agents recruited Libyans to gather information and train them on how to influence any future Libyan elections.

Part of their mission was also to assist Russian building an air base in Libya while preventing the U.S. from having one, it said.

On Wednesday, Russia's Foreign Affairs Ministry called for the release of the two men, claiming they were working for the Foundation for the Protection of National Values, a research group studying the humanitarian, cultural and political situation in Libya.

The ministry added that their continued detention hinders further cooperation between the two countries.

Earlier, the Libyan government said Shugalei and Seifan had contacts with the Wagner Group, which is accused of sending thousands of mercenaries to fight in support of Libyan warlord Khalifa Haftar against the internationally recognized Libyan government.

Since the ouster of late ruler Gadhafi in 2011, two seats of power have emerged in Libya: Haftar in eastern Libya, supported mainly by Egypt and the UAE, and the GNA in Tripoli, which enjoys the United Nations and international recognition.

In March, the Libyan government launched Operation Peace Storm to counter attacks on the capital and recently regained strategic locations, including the al-Watiya air base and Tarhuna city, in a major blow to Haftar's forces.