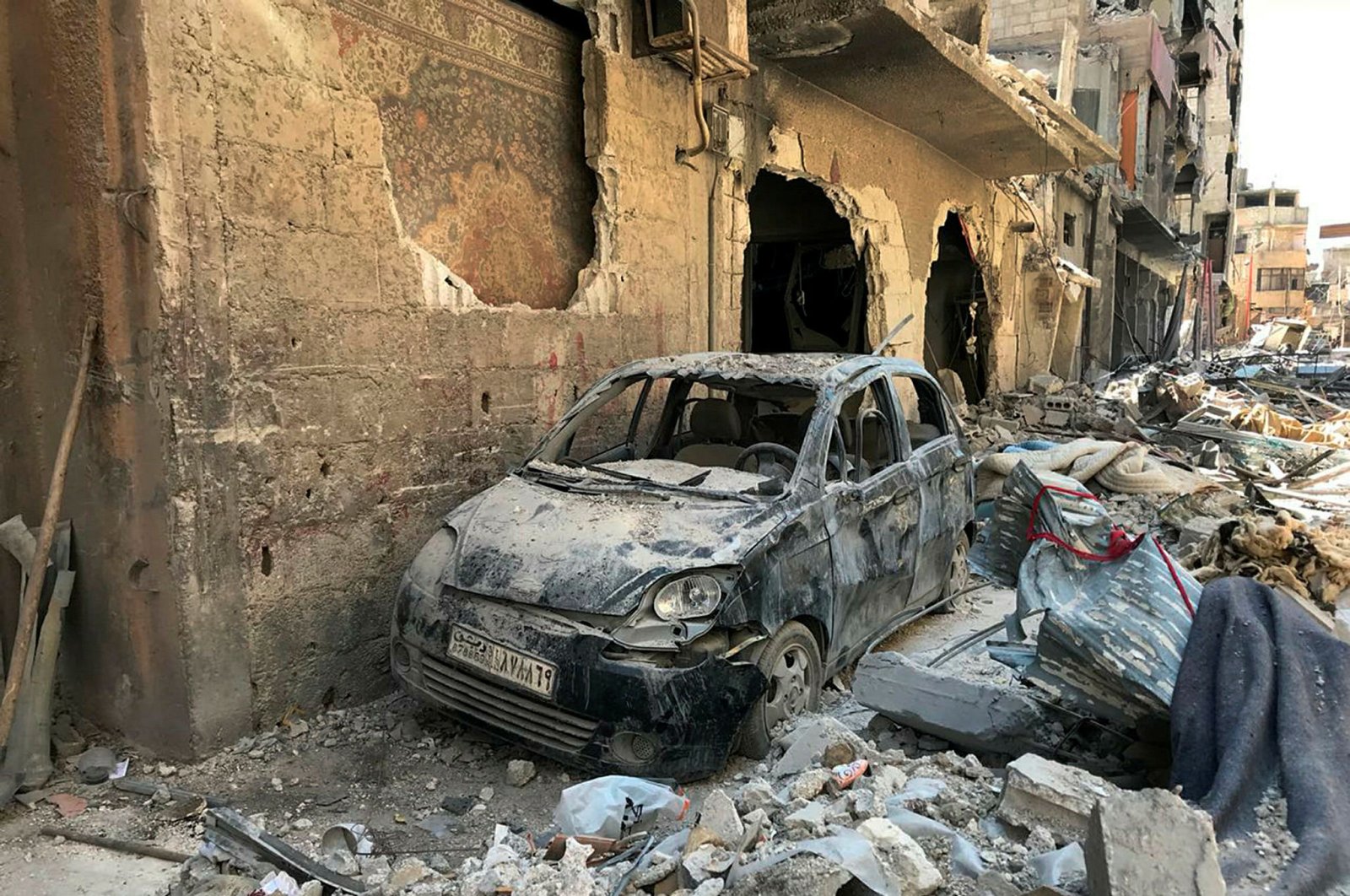 Rubble lines a street in Douma, the site of a suspected chemical weapons attack near Damascus, Syria on April 16, 2018 (AFP File Photo)
by Anadolu Agency Apr 10, 2020 9:16 am
Edited By Nurbanu Tanrıkulu Kızıl
RECOMMENDED

The British government on Thursday welcomed a report by the international chemical weapons watchdog on the use of prohibited chemical weapons by forces of Syria's Bashar Assad regime in Ltamenah in March 2017.

"These appalling attacks were part of a wider pattern of sustained chemical weapons use by Assad's regime against his own people," Foreign Secretary Dominic Raab said in a statement.

Raab, who is deputizing for Prime Minister Boris Johnson following his admittance to hospital with persistent coronavirus symptoms, said he was grateful for the "thorough efforts" of investigators for the Organization for the Prohibition of Chemical Weapons (OPCW).

"The U.K. will continue to work tirelessly with its partners to ensure that Assad's chemical weapons use is addressed and those responsible are held to account," he said.

"The use of chemical weapons is an international crime and can never be justified."

"The report concludes there are reasonable grounds to believe in three separate chemical weapons attacks in Ltamenah in March 2017, units from the Syrian Arab Air Force were responsible for using sarin on two occasions, and chlorine on the third."

It said the "conclusions leave no doubt that the Assad regime is in breach of its obligations under the Chemical Weapons Convention."

It noted that "Syria has also failed to comply with United Nations Security Council Resolution 2118, which demanded the complete destruction of Syria's chemical weapon stockpile and production facilities."

The recent report "adds to the evidence produced by previous U.N.-mandated investigations that found Assad's regime to have used chemical weapons against his own people on at least four separate occasions."

"The U.K. calls all states party to the Chemical Weapons Convention, the UN Security Council, and other bodies to respond decisively and hold those responsible to account," it said.

"It is now up to the Executive Council and the Conference of the States Parties to the Chemical Weapons Convention, the United Nations Secretary-General, and the international community as a whole to take any further action they deem appropriate and necessary," said the watchdog's director-general, Fernando Arias.

Santiago Onate-Laborder, coordinator of the Investigation and Identification Team set up by the watchdog in 2018, said: "There are reasonable grounds to believe that the perpetrators of the use of sarin as a chemical weapon in Ltamenah on 24 and 30 March 2017, and the use of chlorine as a chemical weapon on 25 March 2017 were individuals belonging to the Syrian Arab Air Force."

Syria has been locked in a vicious civil war since early 2011 when the Assad regime cracked down on protesters with unexpected ferocity.