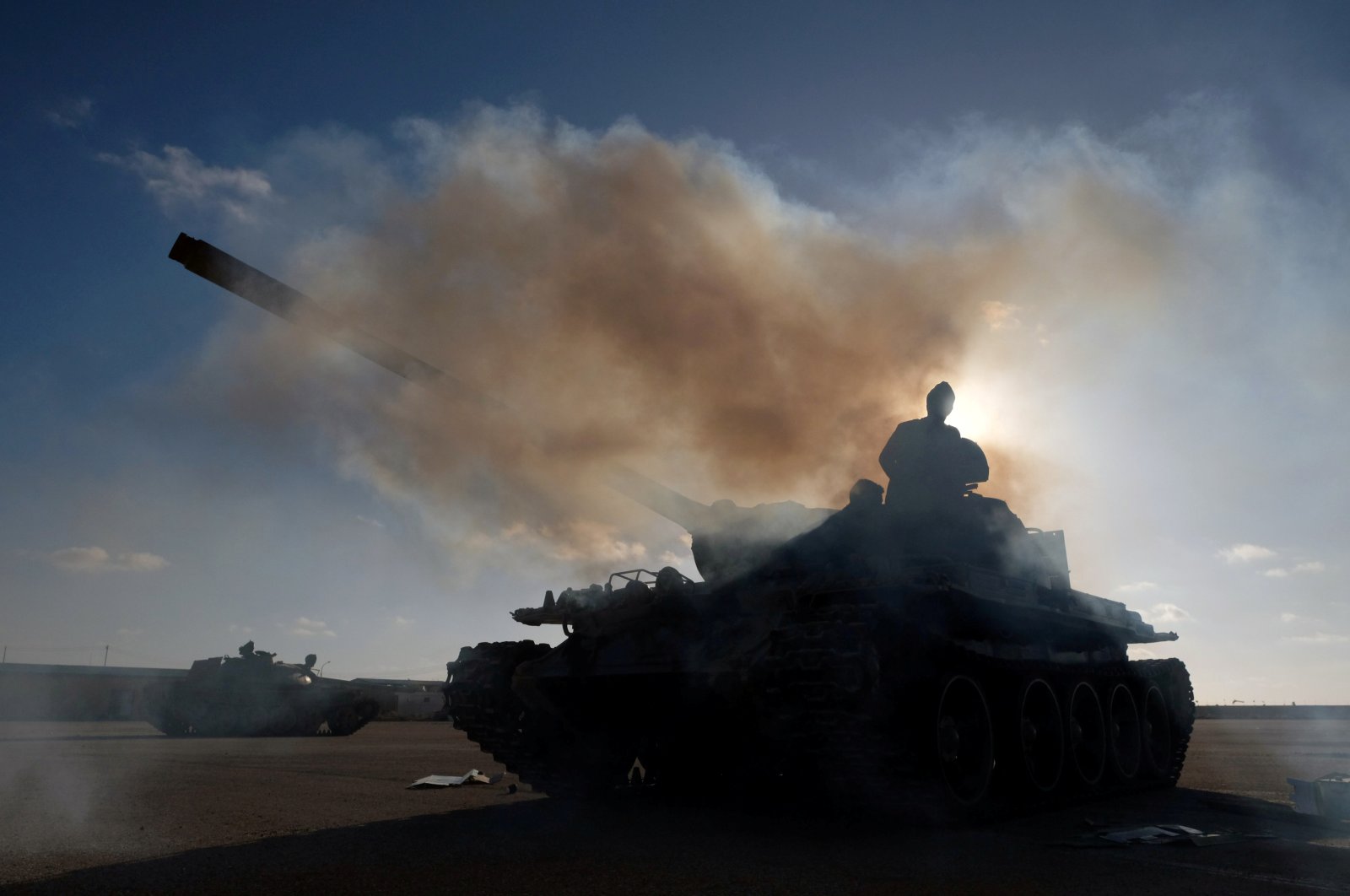 Members of forces loyal to warlord Khalifa Haftar get ready before heading out of Benghazi to reinforce the troops advancing to Tripoli, Benghazi, Libya, April 13, 2019 (REUTERS Photo)
by DAILY SABAH Mar 20, 2020 11:00 am
Edited By Dilara Aslan

Ignoring calls of the international community and the U.N., fighting on the ground in Libya continued as Haftar forces did not refrain from attacking civilians, including children

The United Nations Support Mission in Libya (UNSMIL) condemned a shelling attack on civilians Thursday. The barrage occurred only hours after international pleas for a humanitarian pause were made on Wednesday to help with the fight against the coronavirus.

Forces of the U.N.-recognized Government of National Accord (GNA) killed 25 militias loyal to putschist leader Khalifa Haftar early Friday during clashes in the capital Tripoli.

The slain militia members were said to be mercenaries brought over from Sudan and Chad. Photos of their corpses were posted on social media.

"We stress again that we did not start this war. However, we will decide when and where this war will end," GNA military spokesman Mohammed Qanunu said in a press release.

The attack came after three children lost their lives Wednesday when forces loyal to Haftar fired rockets on the Libyan capital Tripoli, despite recent calls from the international community to halt hostilities during the novel coronavirus outbreak.

According to the GNA's Health Ministry, the three children, from the same family, died after a rocket hit the southern Ain Zara region.

Another woman in a car was killed about an hour earlier in a rocket attack on the Bab bin Gashir region. The woman’s daughter and niece, also present in the vehicle, were wounded.

Heavy clashes broke out on Tripoli's front lines as Haftar's soldiers attacked Salah Al-Deen, Ain Zara and the Airport Road areas, achieving brief advances in the early morning. Libyan Army forces under the command of the GNA, after receiving military reinforcements, managed to repel the attacks and regain lost positions, pushing Haftar's troops away. Libyan Army forces lost eight fighters and several others were wounded in the battle. Qanunu said Haftar's forces repeatedly violate the cease-fire with attacks on Ain Zara, reiterating that the Libyan Army is committed to the truce.

Haftar's forces have been trying to dominate the Al-Ramla front line near Tripoli International Airport to control the Al-Sawani and Al-Zahraa areas in an effort to disconnect Tripoli from the Western Mountain region.

Tuesday, the United Nations Support Mission in Libya (UNSMIL) echoed calls from the group's international partners requesting a cessation of hostilities and a halt in the transfer of military equipment and personnel into Libya, to allow local authorities to respond to the unprecedented public health challenge posed by the coronavirus pandemic.

The UNSMIL’s statement came after the European Union and eight Western and North African countries called for a pause of the fighting in Libya earlier in the day. The World Health Organization (WHO) also voiced support Wednesday.

“WHO strongly endorses UNSMIL’s appeal for a cease-fire in Libya to allow national health authorities and health partners to respond to the potential spread of COVID19 in the country,” it said in a written statement on Twitter.

Libya has not yet confirmed any cases of the coronavirus, but its center for disease control and the WHO have warned that it is not prepared for an outbreak.

The UNSMIL further urged that “COVID-19 has no affiliation and breaks through all front lines,” calling on all Libyans to join forces to combat this overwhelming, fast-spreading threat, which requires consolidating all resources and efforts for prevention, awareness and the treatment of possible victims.

Conflict in Libya erupted between the two rival factions that emerged following the ousting of late ruler Moammar Gadhafi in 2011 – namely, eastern-based Haftar and the GNA in Tripoli. Haftar is primarily supported by Egypt and the United Arab Emirates, while the GNA in Tripoli enjoys U.N. and international recognition. Although a cease-fire was reached on Jan. 12, following U.N.-led diplomatic negotiations for a peaceful political solution, forces loyal to Haftar have repeatedly violated the truce.

The UNSMIL called for investigations into crimes committed in Libya during the conflict on Wednesday, expressing deep concerns over the recent increase in abductions in towns and cities across the country. Since April 2019, the group has received reports of hundreds of disappearances, torture, killings and the displacement of families. The UNSMIL renewed its call for the full respect of international human rights and humanitarian laws by all parties in the conflict.

“The UNSMIL recalls that torture, enforced disappearances and extrajudicial killings are a violation of international law, the Constitutional Declaration of 2011, domestic applicable law and, depending on the precise circumstances, may constitute war crimes and crimes against humanity. The UNSMIL also calls for the establishment of an investigative mechanism by the U.N. Human Rights Council, as the simplest and strongest basis for promoting accountability in Libya,” a statement on their website said.