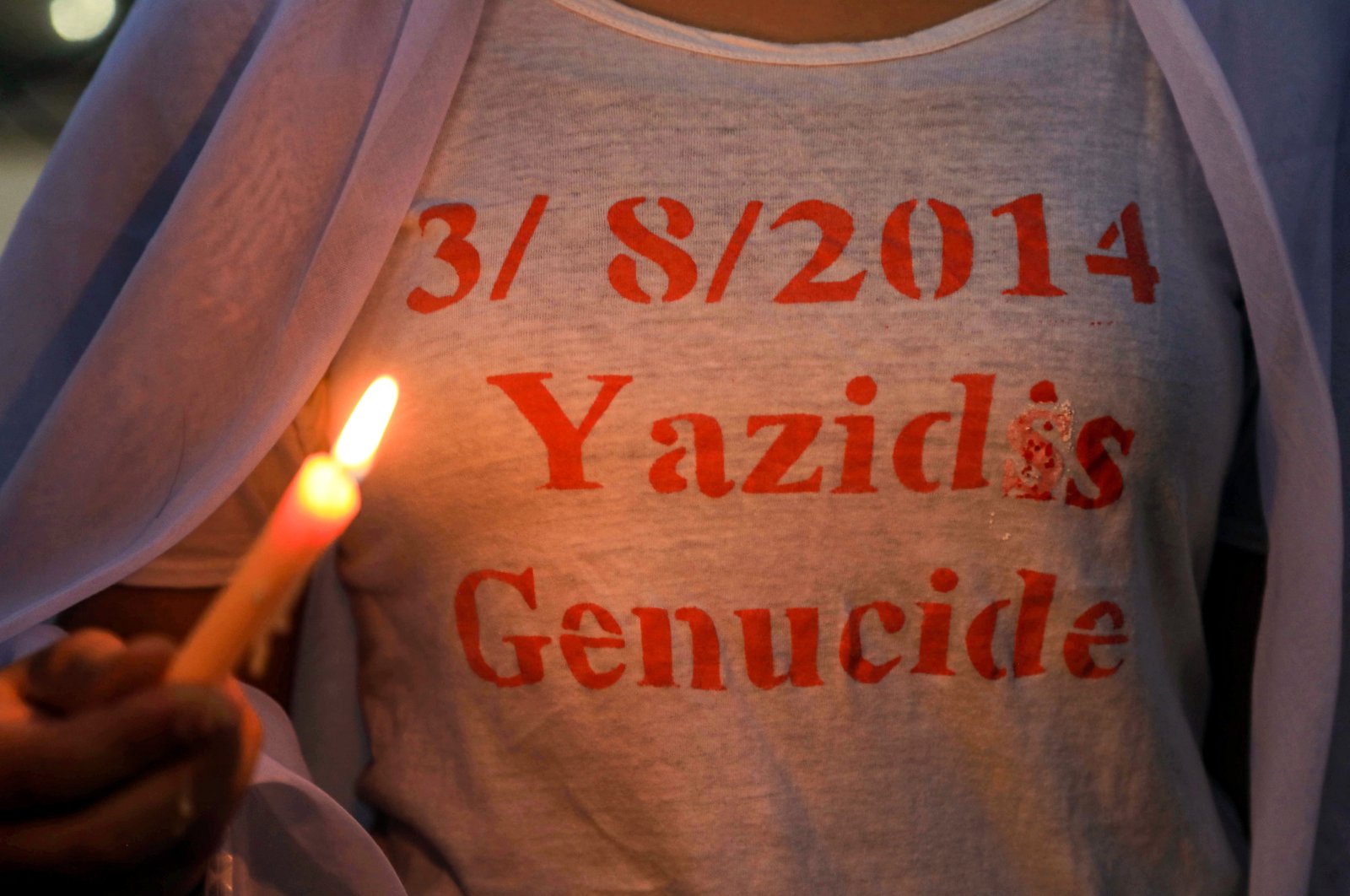 Iraqi Yazidis attend a candle-lit vigil in the Sharya area, some 15 km (9 miles) from the northern city of Dohuk in the autonomous Iraqi Kurdistan Regional Government (KRG) region, marking the sixth anniversary of the Daesh attack on the Yazidi community in the northwestern Sinjar district of Iraq, Aug. 3, 2020. (AFP Photo)
by DAILY SABAH Aug 04, 2020 1:50 pm
Edited By Dilara Aslan
RECOMMENDED

Recalling the atrocities committed by Daesh against the Yazidis six years ago, the special representative of the United Nations secretary-general for Iraq, Jeanine Hennis-Plasschaert, on Monday called on the international community, Baghdad and Irbil to reach an agreement without delay to provide this beleaguered community with the tools and the right environment to rebuild their lives.

“In 2014, Daesh ravaged through Sinjar, killing and destroying, singling out Yazidis in their systematic campaign of destruction. Thousands upon thousands of people fled to the mountains. Many were killed. Women and children were kidnapped and enslaved, subjected to heinous sexual crimes. Many remain missing, and the survivors continue to bear the scars of this trauma,” she stated.

According to a 2016 U.N. report, Daesh committed genocide and other crimes against the Yazidis in Syria and Iraq in an effort to destroy the religious community of 400,000 people. Their report, based on interviews with dozens of survivors, said the militants had been systematically rounding up Yazidis in Iraq and Syria since August 2014, seeking to "erase their identity" in a campaign that met the definition of genocide as defined under the 1948 Genocide Convention.

A survivor of the genocidal attack and a Nobel Peace Laureate, Nadia Murad reminded countries at a virtual U.N. event Monday that the impacts of Daesh's atrocities endure to this day.

The young human rights activist, who was among thousands of Yazidi women forced into sexual slavery by the terrorist group, said although 100,000 Yazidis have returned to their homeland in Sinjar, in northern Iraq, they lack vital services such as health care and education.

According to the U.N., scores more remain in camps, nearly 3,000 kidnapped women and girls are still missing and dozens of mass graves have yet to be exhumed.

“The world watched in outrage and demanded that tangible action be taken to end the genocide. But six years later, the international community has failed to keep its commitments to protect those most vulnerable, especially women and children,” said Murad.

Human rights lawyer Amal Clooney at the event recalled that the international community established tribunals for genocides in Germany, Bosnia and Rwanda and told diplomats Yazidi survivors deserve no less.

“Doing nothing is not only wrong, it is dangerous, because these fighters are not going anywhere and their toxic ideology continues to spread,” Clooney underlined. “Justice is possible now, just as it has been possible before, if only it is made a priority.”

Turkish Foreign Minister Mevlüt Çavuşoğlu was also among those remembering the genocide. On Monday, he stressed that Yazidis, who had suffered terror and massacres under the Daesh terrorist group, now face the threat of the PKK.

"Grief for Yazidis massacred 6 years ago by DAESH is still vivid in our memory. Unfortunately, Yazidis that escaped DAESH atrocities are now suffering from PKK terrorism and oppression," Çavuşoğlu wrote on Twitter.

In mid-2014, the PKK managed to establish a foothold in Iraq’s Sinjar, on the pretext that it was protecting the local Yazidi community from Daesh by expanding its presence in northern Iraq.

Ankara has been highly vocal in its criticism of the PKK's presence in Sinjar, as the terrorist group's existence on the Turkish border poses a significant threat to the country's national security.

Ankara had previously warned the KRG and Baghdad numerous times about eliminating the PKK's presence to maintain Turkey's border security and that of the local ethnic group living in the region. Despite top officials from both governments often expressing their discomfort with PKK camps and activities, saying they will not allow militants to attack Turkey from their soil, no serious action was taken.

With no action from Iraq or the KRG, Turkey decided to take matters into its own hands and assumed a hardline stance against the PKK presence in the region.

Northern Iraq has frequently been hit by the Turkish military since the early 1990s due to threats directed by PKK terrorists from the Qandil mountains, located roughly 40 kilometers (25 miles) southeast of Turkey's border in northern Iraq's Irbil province.

Marking the anniversary of the genocide, KRG President Nechirvan Barzani in a written statement Monday stated the KRG is “aware that the wounds of our Yazidi sisters and brothers have not healed; as thousands of displaced Yazidis are still living in IDP and refugee camps.”

He added that neither Sinjar nor other areas have seen reconstruction and that they “still lack the stable ground necessary for the return of life and stability.” He pointed out that Sinjar has become a safe haven for “unlawful gunmen who are pursuing their political agendas through the exploitation of the Yazidis’ deep wounds and calamities.”