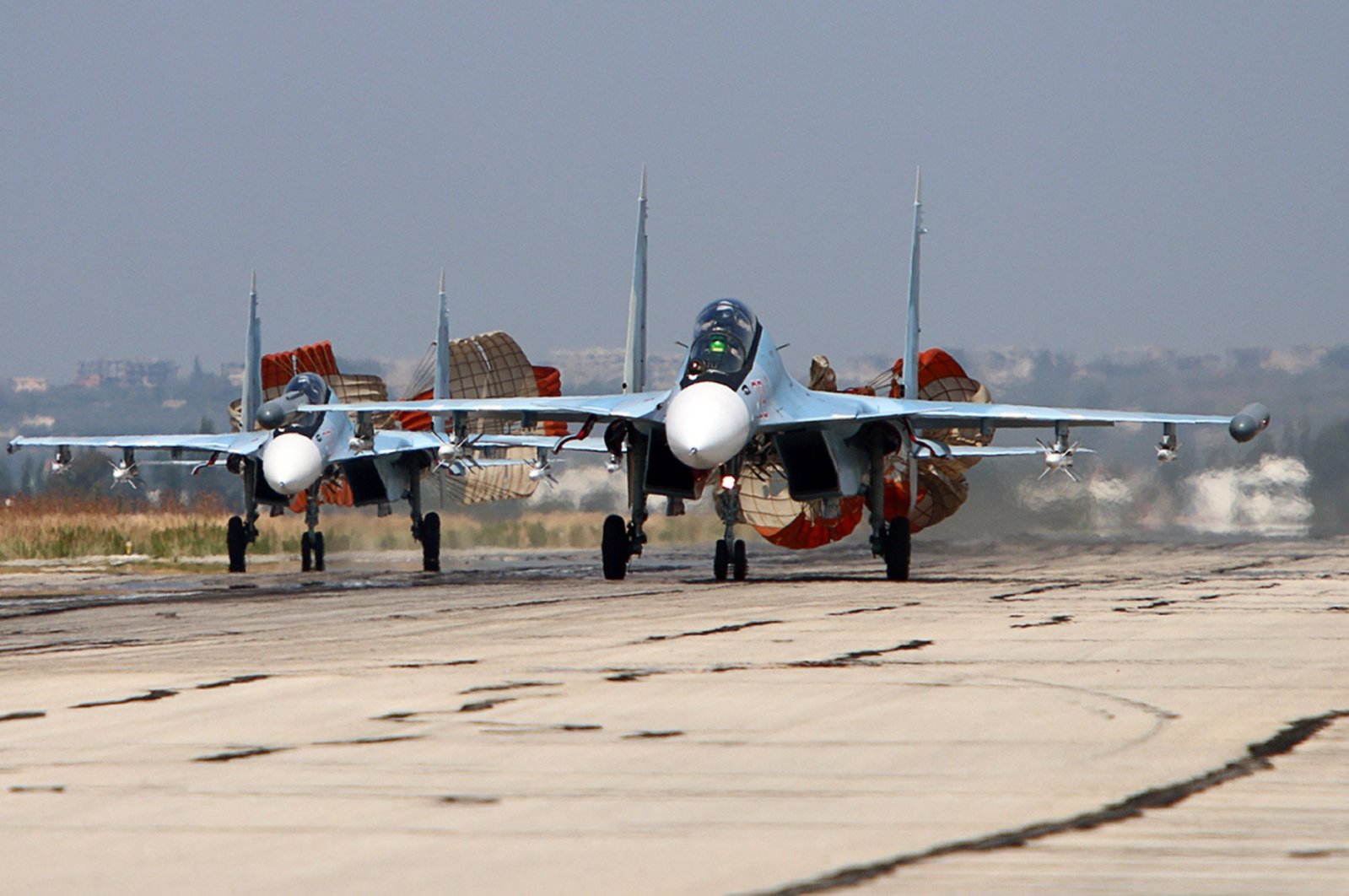 A picture taken on October 3, 2015 shows Russian Sukhoi SU-30 SM jet fighters landing on a runway at the Hmeimim airbase in the Syrian province of Latakia. (AFP Photo)
by Anadolu Agency May 22, 2020 11:28 am
Edited By Nurbanu Tanrıkulu Kızıl
RECOMMENDED

U.N. experts reportedly launched a probe into transfer of eight Russian-made warplanes to war-weary Libya, where the internationally recognized government continues to fight against affiliates of putschist commander Khalifa Haftar.

According to a report by the Financial Times based on statements of anonymous diplomats, the dispatch of the warplanes to the putschist commander might further escalate the tension in the country.

An unidentified Western official said: "This is Syria playing out right here in Libya. This is becoming a real proxy war."

Referring to Libyan Interior Minister Fathi Bashaga's statement in which he said at least eight fighter jets had flown into eastern Libya from Hmeimim air base in Syria, the Western diplomat said it was "almost certainly more than this" number of aircraft.

According to the report, the UAE had flown in up to 10,000 tons of military equipment in 2020 to support the 76-year-old warlord Haftar. However, Abu Dhabi has denied operating arms flights to Libya.

The diplomats also said the U.N. authorities were investigating a shipment of about 11,000 tons of jet fuel from the UAE to Libya's Benghazi in March.

However, Haftar's forces lack the capacity to fly the dispatched warplanes, according to the report, which also said there were several hundred Russian mercenaries of the Wagner Group backing the warlord.

Wolfram Lacher, a Libyan analyst, speculated on the possible operational activities of the dispatched warplanes, claiming Haftar's side would use them to bomb Al-Watiya air base.

Lacher argued the warplanes might also target air defenses positioned in the capital Tripoli and Misurata, adding deployment of the aircraft sought to prevent the Libyan Army from "pushing Haftar out of western parts of the country."

The Libyan Army recently secured control over Al-Watiya air base, a strategically important military base in western Libya that was used by the Haftar side for years. The retaking of the air base was viewed by many experts as a significant blow to the Haftar side and its supporters.

Responding to the threats, a Turkish Foreign Ministry spokesperson said, "We reiterate once again that in the case of targeting Turkish interests in Libya, this will have very heavy consequences and the putschist Haftar elements will be considered as a legitimate target."

The Libyan government, also known as the Government of National Accord (GNA), has been under attack by warlord Haftar's armed forces since April 2019.

The Libyan government launched Operation Peace Storm on March 26 to counter attacks on the capital. Following the ouster of late ruler Muammar Gaddafi in 2011, Libya's new government was founded in 2015 under a U.N.-led political deal.