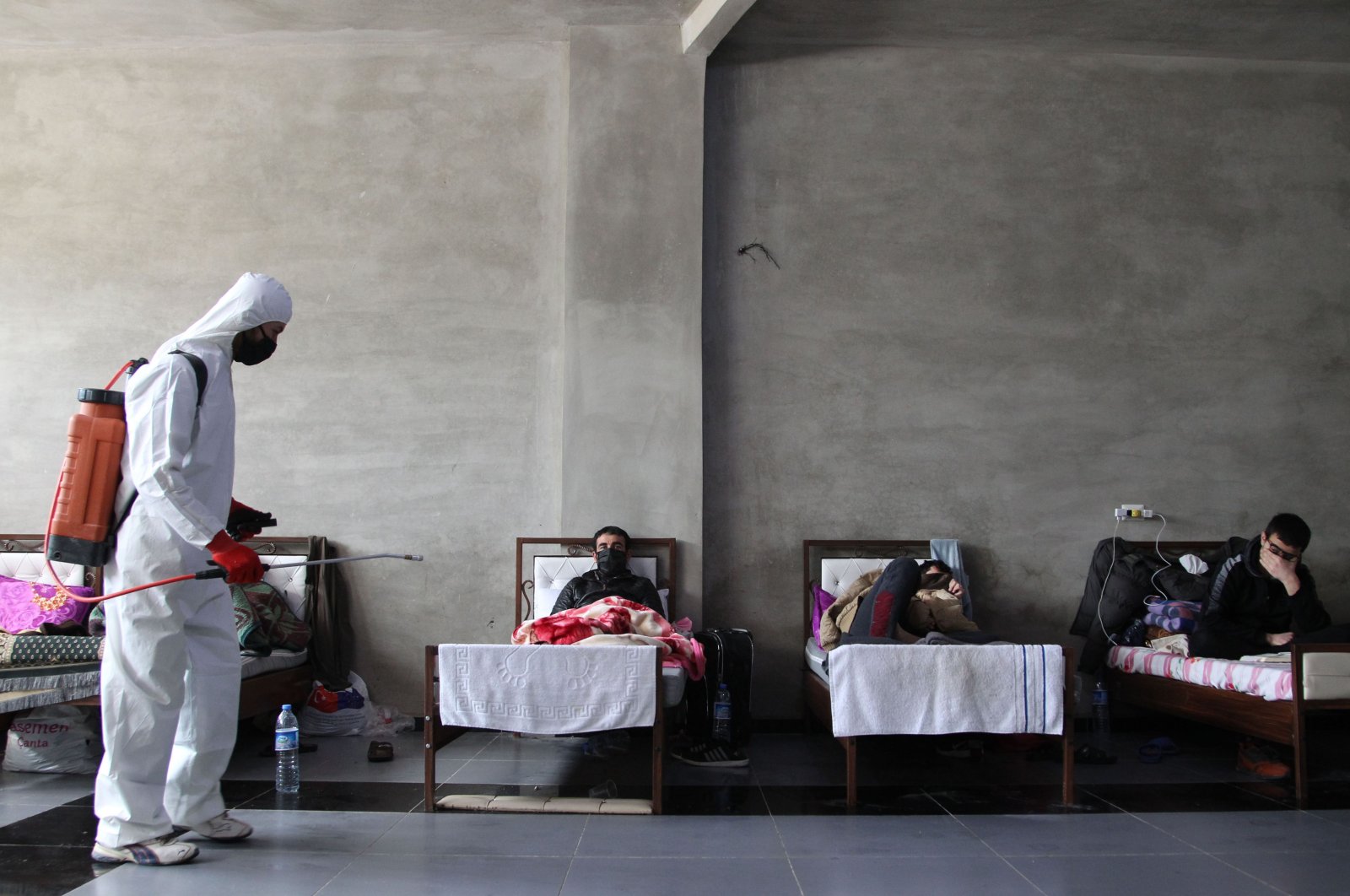 A man sanitizes the room as Syrians who returned from Turkey rest at a COVID-19 quarantine facility in the countryside of the town of Jisr al-Shughur, west of the mostly opposition-held Syrian province of Idlib, on April 27, 2020. (AFP Photo)
by DAILY SABAH Apr 28, 2020 11:16 am
Edited By Dilara Aslan
RECOMMENDED

Violence has been significantly lower in northwestern Syria, where the Bashar Assad regime and its backer Russia had launched a campaign to take back areas under opposition control since the cease-fire was established. However, the U.N. warns that the humanitarian situation is critical with widespread malnutrition and the lack of supplies needed to fight the coronavirus pandemic, while around 850,000 remain displaced.

As military operations nearly ceased in the region, 135,000 people that were displaced since Dec. 1 returned to areas in northwestern Idlib and Aleppo provinces. According to U.N. numbers, this includes some 114,000 people who returned to their areas of origin and some 21,000 internally displaced persons (IDPs) who returned to their previous location of displacement. Still, since the areas to which the civilians returned were heavily damaged by bombardments and shelling by the Assad regime and its backers, economic hardship and years of conflict continue to deeply affect the lives of these people. Taking precautions and combating COVID-19 with half of the medical infrastructure in the country out of service seems a difficult task.

“Humanitarian needs are also increasing in some parts of western Aleppo governorate and southern Idlib governorate as thousands of families reportedly return to areas from which they fled, where many services and humanitarian activities were suspended or moved elsewhere as a result of recent hostilities,” the U.N. Office for the Coordination of Humanitarian Affairs (OCHA) stated in a report updated Tuesday.

“The economic situation in northwest Syria further exacerbates humanitarian needs as the prices of basic items such as food, water and hygiene items that people need for their survival have been increasing consistently, reaching new highs every month since November 2019,” it added.

A de-escalation zone was established in Idlib by Turkey and Russia in 2018 and was seen as the last shelter for millions of displaced people. The population of the province had gradually increased with many people running from regime attacks and terrorist torture. However, the displacement of civilians has intensified since mid-December when the Russian-backed Assad regime started a new assault to seize the last opposition bastion. It is estimated that over 1 million Syrians have moved near the Turkish border due to intense attacks over the last year, while half of this number was displaced after November 2019. After heightened tensions, Russia and Turkey on March 5 reached an agreement to halt violence and the flow of displacement.

Of the nearly 1 million people in the area who fled their homes to escape from hostilities between December and early March, some 846,000 people reportedly remain in displacement, while 60% of these are estimated to be children and another 21% women.

“Malnutrition is also becoming an increasing problem. For example, 3 in 10 pregnant or lactating women are acutely malnourished, compared to 1 in 20 in the first half of 2019. Malnourished people have a compromised immune system and are therefore at elevated risk of mortality due to COVID-19,” OCHA stressed.

Yearslong sieges caused the deterioration of the physical health of many people, who have suffered malnutrition and widespread poverty. Another risk is that people often live in overcrowded places and camps – ideal for the spread of the virus. The camps are generally in poor conditions with a lack of access to water, hygiene, medical aid and food.