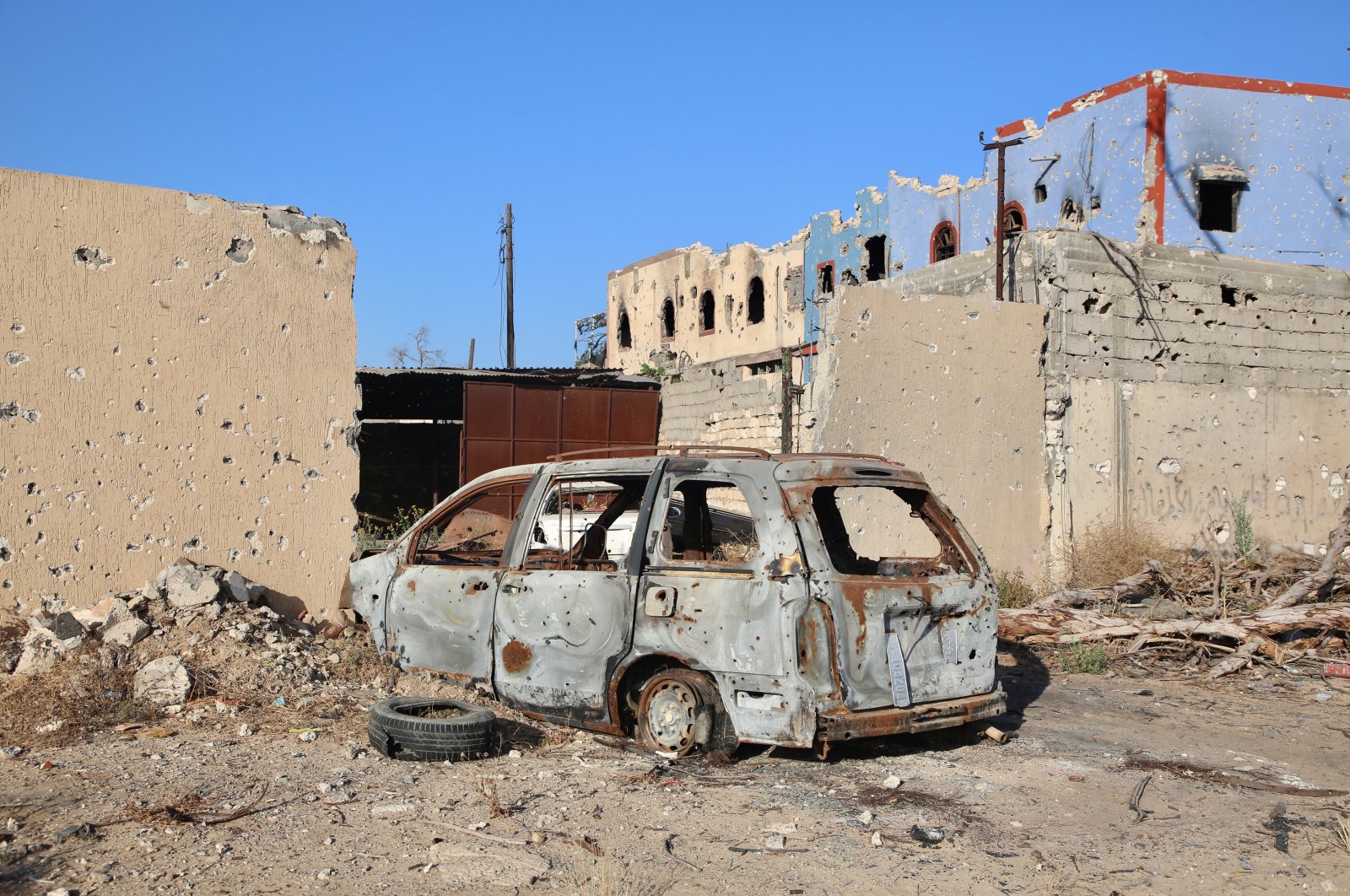 A destroyed vehicle is pictured in front of rundown buildings in residential areas in southern Tripoli liberated from Khalifa Haftar's militias, June 27, 2020. (AA Photo)
by DAILY SABAH WITH AA Jul 02, 2020 9:24 am
Edited By Eralp Yarar
RECOMMENDED

United Nations Secretary-General Antonio Guterres told putschist Gen. Khalifa Haftar Wednesday that there can be no military solution to the conflict he launched in April 2019 against the U.N.-supported government in the capital, Tripoli.

Guterres also spoke to Libyan Prime Minister Fayez Sarraj, who indicated his commitment to a dialogue within the Libyan Joint Military Commission “and expressed his interest in a political solution based on elections," Dujarric said.

The secretary-general told Haftar that “the solution can only be political, and Libyan-owned and Libyan-led,” and he reaffirmed the U.N. commitment to talks between the two sides in the Libyan Joint Military Commission, Dujarric said.

The U.N. chief also reiterated his shock at the recent discovery of mass graves in territory recently recaptured from forces commanded by Haftar “and stressed the need for full respect of international human rights law and international humanitarian law,” the spokesman said.

The U.N. said June 12 that at least eight mass graves had been discovered, mostly in Tarhuna, a key western town that served as the main stronghold for Haftar’s forces in their 14-month campaign to capture Tripoli. The discoveries raised fears about the extent of human rights violations in territories controlled by his militias, given the difficulties of documentation in an active war zone.

Sarraj indicated his commitment to a dialogue within the 5+5 Libyan Joint Military Commission and expressed his interest in a political solution based on elections.

Libya has been in turmoil since 2011, when a civil war toppled long-time dictator Moammar Gadhafi, who was later killed. The country has since split between rival administrations in the east and the west, each backed by armed groups and foreign governments.

Ankara supports Libya's U.N.-recognized Government of National Accord (GNA) in the conflict against Haftar’s illegitimate forces. Under a military pact with Libya signed last November, Turkey also sent military advisers to assist in the battle against Haftar's forces.

The Libyan government forces with Turkish support gained the upper hand in the war in early June after retaking the capital’s airport, all main entrance and exit points to the city and a string of key towns near Tripoli. They threatened to retake the strategic city of Sirte, which could allow them to gain control of oil fields and facilities in the south that Haftar seized earlier this year as part of his offensive on Tripoli.

Egypt warned that it would intervene militarily if Turkish-backed forces attacked Sirte, leading Italy, Germany and the U.S. to call for a cease-fire and de-escalation of tensions in Libya last week.

Egyptian President Abdel-Fattah el-Sissi said any attack on Sirte or the inland Jufra air base would amount to crossing a “red line.” He said Egypt could intervene to protect its western border with Libya and bring stability, including establishing conditions for a cease-fire.

The Tripoli-based government said it considered el-Sissi’s comments a “declaration of war,” while authorities in the east welcomed his support.

On Friday, Libya’s National Oil Corporation said Russian and other foreign mercenaries had entered the country’s largest oil field, describing the development as an attempt to thwart the resumption of halted oil production.

Dujarric said that in his conversation with Haftar, Guterres “indicated his commitment to helping find a solution for the reopening of blocked oil terminals and oil fields in the country.”

He said the secretary-general and Sarraj “also discussed the need to reopen blocked oil terminals and oil fields in the country."

Earlier this week, Libya’s National Oil Corporation (NOC) confirmed there had been international talks to end the blockade on oil exports involving the GNA, the U.N., the U.S. and regional countries, expressing optimism that the blockades will be lifted soon.

Guterres also reiterated U.N. support to Libya's government in addressing the COVID-19 pandemic in his call with the prime minister, Dujarric said.