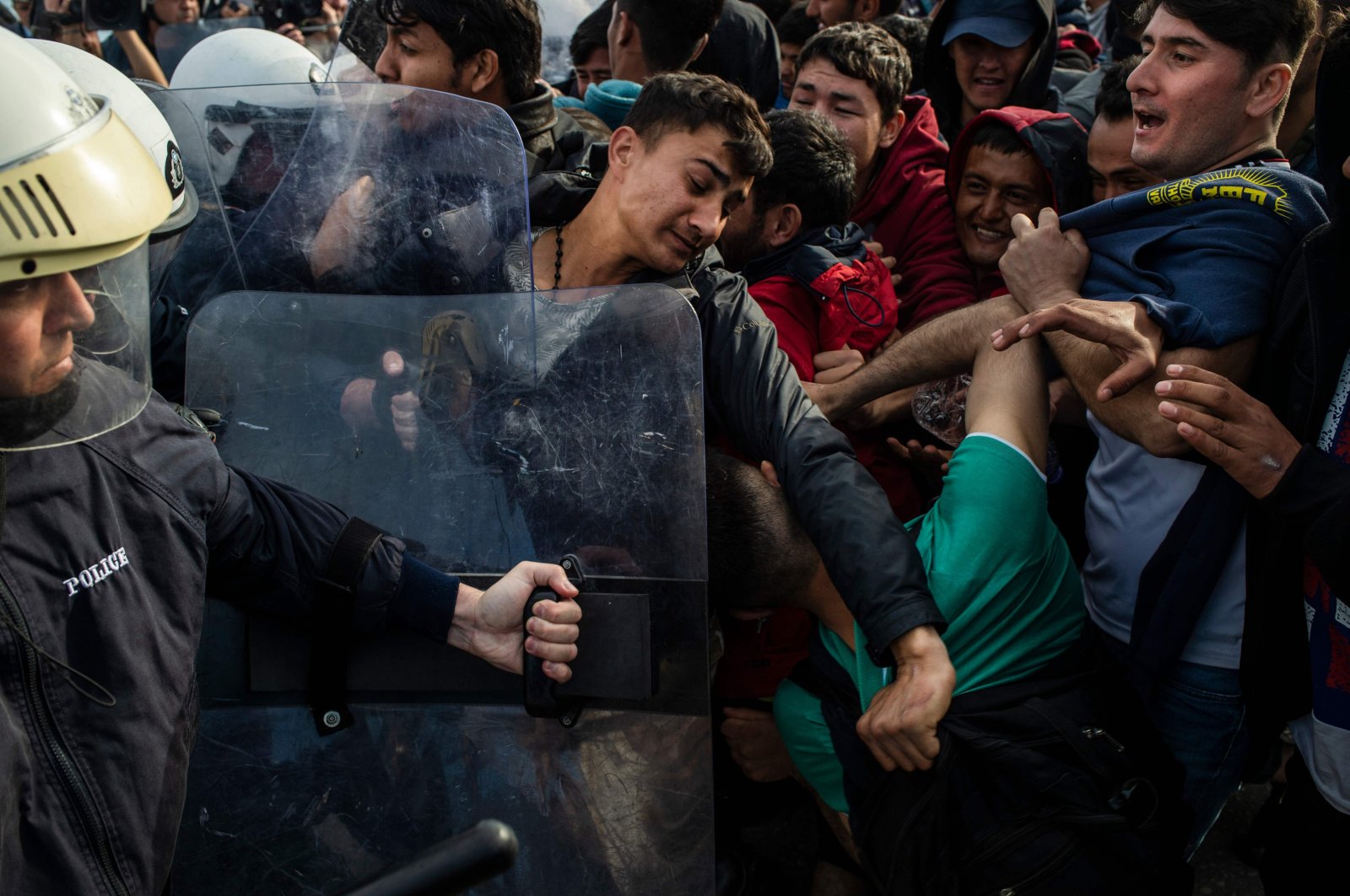 Migrants and refugees scuffle with riot police on the Greek Aegean island of Lesbos amid a migration surge from neighboring Turkey after it opened its borders to thousands of refugees trying to reach Europe, March 3, 2020. (AFP Photo)
by DAILY SABAH Mar 23, 2020 3:05 pm
Edited By Dilara Aslan
RECOMMENDED

Greece must take immediate action to end the violence against migrants and asylum-seekers at the Turkey-Greece border and enhance their protection, Felipe Gonzalez Morales, the U.N. special rapporteur on the human rights of migrants, stated Monday.

"I am very concerned about the reported pushbacks of asylum-seekers and migrants, which constitutes a violation of the prohibition of collective expulsions and the principle of non-refoulement," said Morales in a written statement on the website of the Office of the High Commissioner for Human Rights (OHCHR).

The U.N. expert, in a statement, expressed alarm at the reports of assaults and violence against asylum-seekers by Greek security officers and unidentified armed men aiming to push them back to the Turkish side of the border.

He said migrants who managed to cross the border were allegedly intercepted by Greek border guards, detained, stripped, confiscated of belongings and pushed back to Turkey.

"This alleged excessive use of force seems to have led to deaths and injuries, including the death of a Syrian asylum-seeker," said the statement.

Gonzalez Morales also raised concerns about the rise in hostility and violence against humanitarian workers, human rights defenders and journalists working in the border area and in the Greek islands.

"Greece has the responsibility to ensure that migrants and those assisting them are protected from threats and attacks. The authorities should condemn promptly and ensure accountability for any such acts."

Greece decided on March 1 to suspend access to asylum applications for 30 days for individuals who have crossed the border irregularly. These individuals will be returned to the country they arrived from or to their country of origin without registration or individual assessment.

“Greece should immediately reverse its decision on the suspension of asylum applications, which has no legal basis in international human rights law. The right to individual assessment is the cornerstone of human rights and refugee protection. It cannot be put on hold,” said the U.N. expert.

“Returning people without due process will inevitably result in cases of refoulement to situations where they may face the risk of death, torture, ill-treatment, persecution or other irreparable harm.”

The special rapporteur has contacted the government of Greece about his concerns regarding the situation of migrants, asylum-seekers and refugees at the Turkey-Greece border. Relevant institutions of the European Union and the government of Turkey were also notified.

Ankara last month announced that it would no longer try to stop asylum-seekers and other migrants from reaching Europe, accusing the European Union of failing to keep its part of a 2016 refugee deal.

Thousands of them have since flocked to Turkey's Edirne province – which borders Greece and Bulgaria – to make their way into Europe.

Some try to cross the river to reach Greece, and others have been waiting for the Greek government to open the gates in a buffer zone between Turkey's Pazarkule and Greece's Kastanies border crossings.

The Greek reaction to the migrants has been harsh, including physical attacks and tear gas. Several were even killed by Greek forces on March 1. The Greek government suspended access to asylum for 30 days for people irregularly entering the country. The suspension is a violation of international law, as the Universal Declaration of Human Rights and the EU Charter of Fundamental Rights both guarantee the right to seek asylum.

Turkey’s decision to open the borders came after the international community remained silent in the face of the Bashar Assad regime’s assaults on civilians and civilian settlements. Turkey had frequently voiced that the surge in violence would cause another major refugee wave, which later came true as the Russian-backed regime displaced around 1 million people from northwestern Syria’s Idlib province. Criticizing the lack of international support on sharing the burden, Turkey stated it would not be able to absorb yet another refugee influx, as it already hosts 3.7 million refugees, more than any other country in the world.