UN, West and Russia clash over extension of cross-border aid to Syria 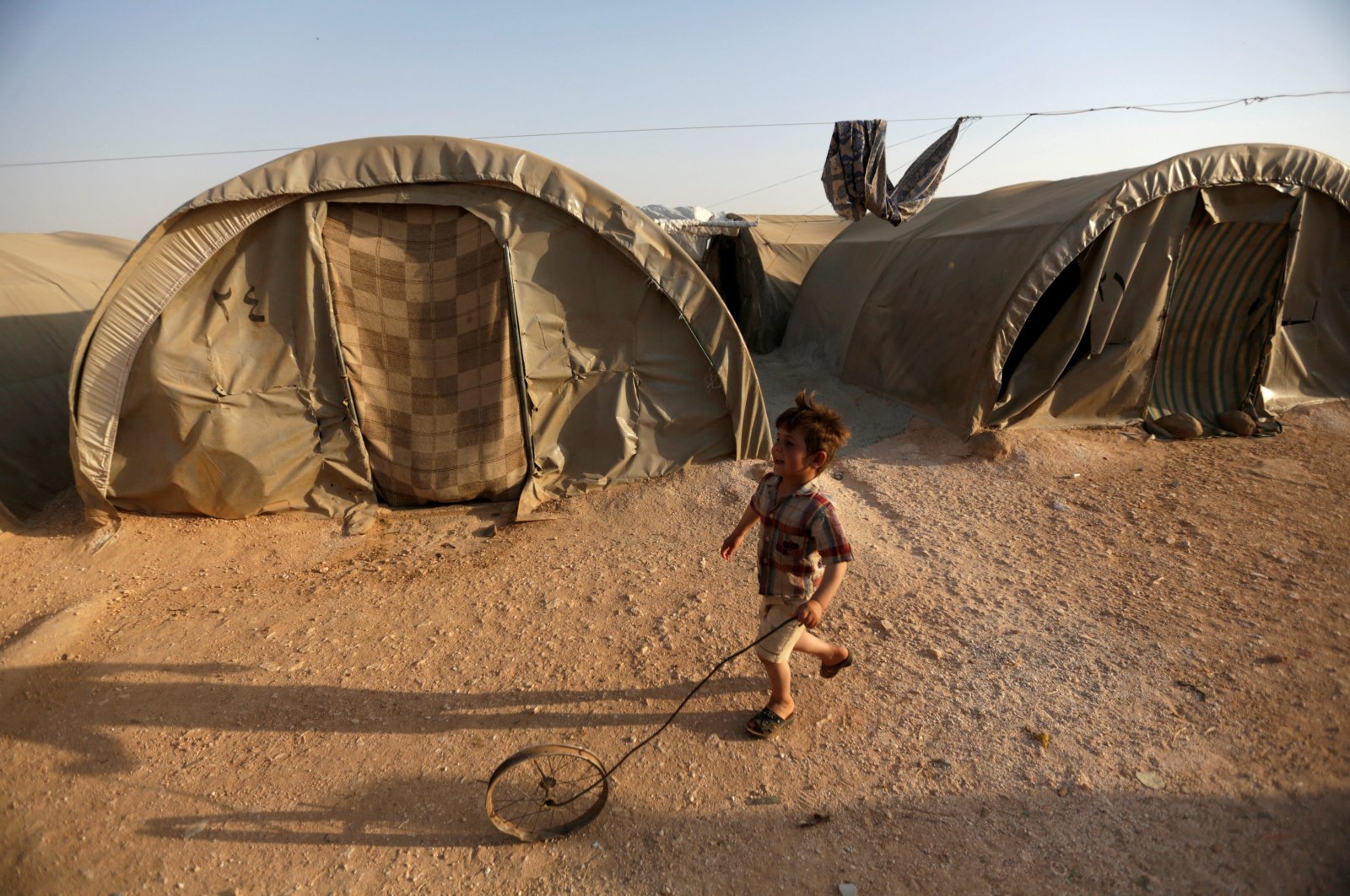 Moscow has been standing its ground to defend its long-time ally Bashar Assad vis-a-vis the calls of the international community to allow humanitarian aid to reach the millions of Syrians suffering from hunger, displacement and a potential outbreak of COVID-19

United Nations humanitarian chief Mark Lowcock warned the U.N. Security Council Monday that a halt to cross-border aid deliveries to Syria’s last opposition bastion Idlib would cause “suffering and death." Yet, ignoring all calls, Russia accused the U.N. and Western nations of trying to “sabotage” assistance from within Syria.

"The northwest continues to suffer a major humanitarian crisis. The cross-border operation needs to be scaled up further," Lowcock said during a virtual meeting, underlining that an estimated 2.8 million people in the opposition-held northwest, 70% of the region’s population, require humanitarian assistance, with growing economic hardship aggravated by the COVID-19 pandemic.

The Bashar Assad regime, which has managed to maintain a tight grip o≈n Syria despite almost a decade of conflict, faces one of its biggest economic crises since the civil war erupted.

With the world focused on combating the global coronavirus pandemic, the Syrian regime has struggled to support the battered economy. After nearly a decade of war, the country is crumbling under the weight of yearslong Western sanctions, regime corruption, infighting, a pandemic and an economic downslide made worse by the financial crisis in Lebanon – Syria’s main link with the outside world.

As the regime has proven not to be able to control the Syrian pound anymore, several regions in northern Syria have reportedly been switching to using the Turkish lira.

Bread prices increased nearly 60% in the opposition-held northwestern province of Idlib, even though the territory with a population of over 3 million is not included in the new sanctions. The Idlib population, many of them unemployed and living in displacement camps, has also been hit hard by the collapse of the pound since it is the main currency used in the province.

Lowcock warned that a failure to extend the cross-border authorization would sever the U.N. operation currently underway by ending the U.N. food deliveries and the support to nutrition centers. "It would cause suffering and death," he stressed.

"So, I want to be clear that the current levels of assistance delivered across the border are far from sufficient," the relief chief added.

The humanitarian chief said two-thirds of the northwest’s population is displaced, the vast majority sheltering in camps and informal settlements where malnutrition rates have been rising in past months. Accordingly, almost three in every 10 children in the region under the age of 5 suffer from stunting, “a condition likely to impact irreversibly their physical and cognitive development,” he said.

Under the cross-border operations, 1,781 aid trucks crossed the border from Turkey into northwest Syria in May. Most of the cross-border aid was food, enough to feed 1.3 million people every month.

It contends cross-border aid was meant to be a temporary response to the nine-year Syrian conflict and the situation on the ground has changed.

In January, Russia scored a victory for Syria, using its veto threat to force the Security Council to adopt a resolution reducing the number of crossing points for aid deliveries from four to just two, from Turkey to the northwest. It also cut in half the yearlong mandate that had been in place since cross-border deliveries began in 2014 to six months.

Russia’s U.N. Ambassador Vassily Nebenzia said at Monday’s council meeting that cross-border aid is not the “magic bullet” for humanitarian problems in Syria but “has become a political tool for drawing lines of division inside Syria.”

He said cross-border deliveries are “incompatible with international law and humanitarian principles.”

What's more, Nebenzia said that cross-broder aid delivery “is used as a leverage against cross-line and as pretext and excuse not to engage seriously in humanitarian deliveries from within Syria.”

“That, in our view, borders with sabotage,” the Russian ambassador said. “And this is not just a slogan. We have concrete facts that we can present.”

Last month, Russia’s Nebenzia said in response to Lowcock and calls by U.S. Ambassador Kelly Craft for the Iraq crossing to the northeast to be opened, “Do not waste your time on efforts to reopen the closed cross-border points.”

Frequent bombings and shelling have led to nearly 50% of health facilities being out of service, just as the Syrian people need them the most amid the coronavirus pandemic. Living in overcrowded tent camps or even out in the open in safe areas near the Turkish border, many are struggling to meet even basic needs.

Despite a March cease-fire brokered by Ankara and Moscow, last month saw Russian warplanes carry out the first airstrikes on Idlib and the surrounding area in three months, in which at least three people were killed.

In January, Russia scored a victory for its close ally Syria, using its veto threat to force the Security Council to adopt a resolution reducing the number of crossing points for aid deliveries from four to just two, from Turkey to the northwest. It also cut in half the yearlong mandate that had been in place since cross-border deliveries began in 2014 to six months, as Russia insisted.

A proposed U.N. resolution drafted by Germany and Belgium would maintain two border crossing points from Turkey to the northwest and reopen an Iraqi crossing to the northeast for a year to deliver medical supplies for the COVID-19 pandemic.

Russia has advocated ending all cross-border aid to Syria, arguing it undermines Syria’s sovereignty despite several reports putting forth that the Syrian regime hinders humanitarian aid to areas not under its control.

Human Rights Watch’s U.N. Director Louis Charbonneau said in the rights group’s research in late April that restrictions on aid from Damascus and Iraq were preventing medical supplies and personnel from reaching 2 million people in the northeast.

HRW said that under international law, Syria had an obligation to realize the entire population’s right to health.

The European Union and the U.N. held a conference on Tuesday to support fundraising efforts for the millions of Syrians forced into exile or living with food insecurity.

"The needs of the Syrian refugees remain acute, not least in view of the potentially devastating socioeconomic impact of the COVID-19 crisis," EU Neigbourhood Commissioner Oliver Varhelyi said ahead of the event.

The annual fundraising round for Syria brought together 60 governments and nonofficial agencies via video. The U.N. pushed governments for nearly $10 billion in aid for Syria.

The main focus of the conference, the fourth of its kind, is to ameliorate the humanitarian plight of the Syrian people.

“Syria remains tragically in the grip of conflict,” EU foreign policy chief Josep Borrell stated during the opening speech of the conference. The foreign policy chief paid tribute to the “extraordinary efforts of Turkey” which hosts the largest number of Syrian refugees in the world.

Borrell urged for a nationwide cease-fire and political solution in Syria. “It is not right that they (Syrian people) remain victims of forces they cannot control. We have to pressure the regime; we need to gather to pressure Damascus to engage in political negotiation... a sense of urgency is now required. This is the only way forward,” he said, adding that the EU will continue to insert pressure on the regime.