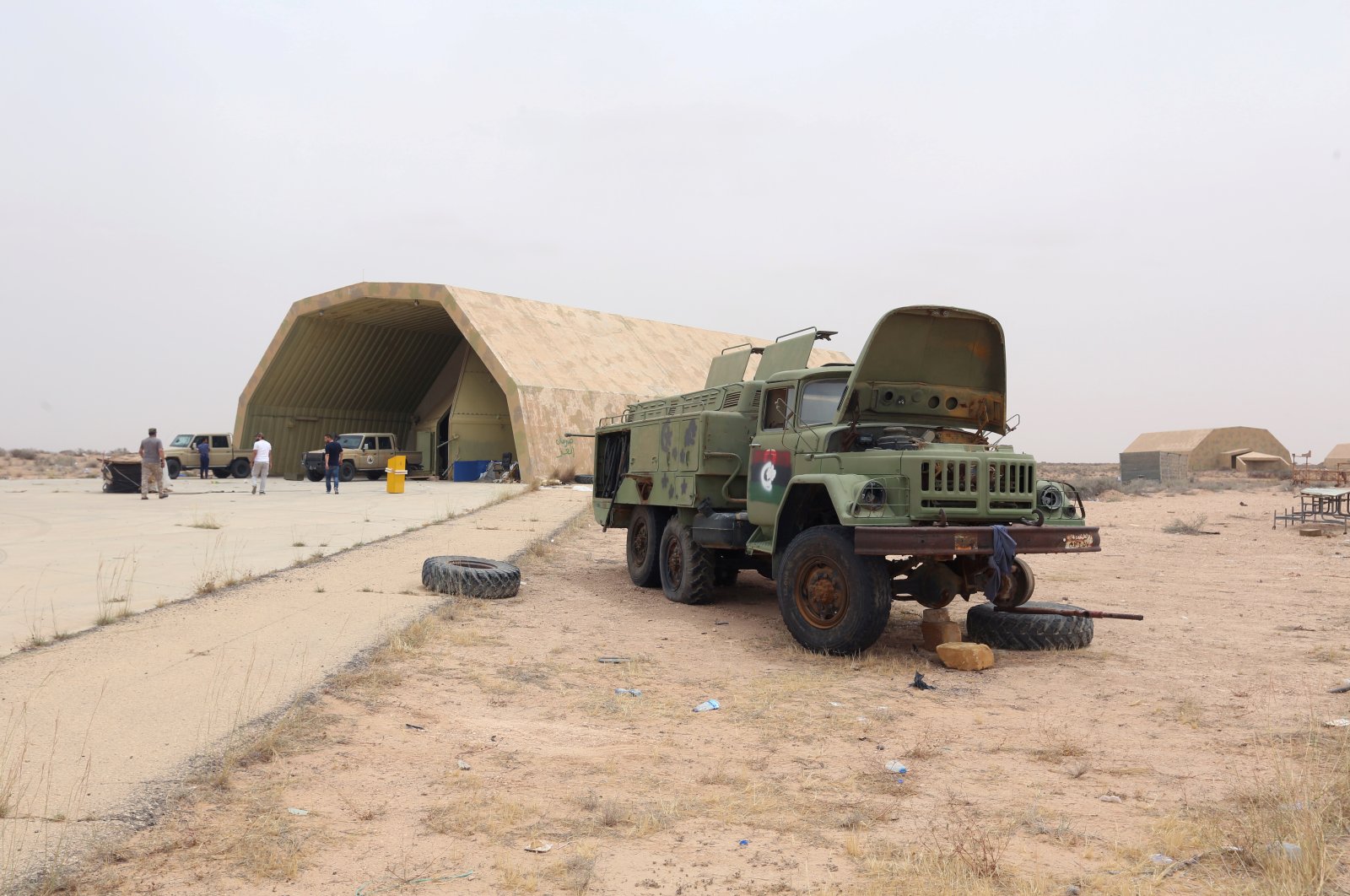 Members of Libya's internationally recognized government are seen after taking control of Al-Watiya air base, southwest of Tripoli, Libya, May 18, 2020. (Reuters Photo)
by DAILY SABAH WITH AGENCIES May 19, 2020 10:02 am
Edited By Nurbanu Tanrıkulu Kızıl

The Libyan Army's success at Al-Watiya will prove effective in eliminating the presence of Khalifa Haftar's militias in the country, GNA officials said, as the army continued to take over more towns from the putschist general's forces

The Libyan Army’s military victory at the Al-Watiya air base will mark the beginning of the country’s liberation from renegade commander Khalifa Haftar’s forces, a Libyan official said Monday, as the country's Foreign Minister noted that Libya will take Haftar’s human rights violations to the U.N. Security Council.

Muhammed Darrat, director of the country's public policy assistance office, told Anadolu Agency that the clearing of the air base was a military victory and end of the "coup plot" of Haftar, and it should be supported with political gains.

Darrat said the state institutions in Libya should be structured through collaboration with ally countries such as Turkey.

On Monday, the Libyan army announced it gained control of Al-Watiya airbase, which was under the rule of Haftar for about six years.

Haftar's forces pulled out of parts of Tripoli overnight, they said, after losing one of their main strongholds in western Libya on Monday, in a major blow to their yearlong campaign to seize the capital.
Haftar militia's spokesman Ahmed al-Mismari said the force had carried out a "redistribution and repositioning in the battlefronts, disengaging from some crowded residential areas," according to Reuters.

On Tuesday, the Libyan Army captured two more towns near the Tunisian border from putschist Gen. Haftar's militias.
The capture of the two towns was announced by the media office of the government-led Burkan Al-Ghadab (Volcano of Rage) Operation.
"Our heroic forces have entered the towns of Badr and Tij amid welcome from their residents," the media office said in a statement on Facebook on Tuesday.
No further details were available.
Libya-based February TV aired a video showing the deployment of Libyan military vehicles in the town of Badr after taking it from Haftar's militias.

"All violations will be brought to the U.N. Security Council along with the sanctions committee," Libyan Foreign Minister Mohamed Siala said in a statement on Facebook.

He stated that Libya will cooperate with all peace supporting international powers to ensure building a democratic civilian state for all the Libyan people.

Also, Libyan Foreign Ministry spokesman Muhammad al-Qiblawi said that his country's government would provide evidence of the United Arab Emirates' involvement in the bloodshed of Libyans and the breach of international resolutions.

"We will provide the Security Council with what has been found in Al-Watiya air base as evidence of violation by several countries of the arms embargo resolution to Libya, especially the Russian Pantsir missile system that Abu Dhabi provided," al-Qiblawi said.

Prime Minister Fayez al-Sarraj expressed his dissatisfaction with the European Union's policy toward crimes against civilians in his country.

Sarraj spoke with EU foreign policy chief Josep Borrell about the matter over the phone, according to a statement from the Prime Ministry.

He said he was dissatisfied with the EU for not taking a more precise and effective stance on the matter.

Emphasizing that the crimes in question were systematically committed and violated international law, Sarraj said they are war crimes and crimes against humanity.

The two men also discussed the latest situation in Libya.

Two military vehicles driven by members of Haftar's militia, which had escaped the air base, were reportedly struck near the 53rd military camp in the Tiji region located near Libya's border with Tunisia.

The moment capturing the airstrike on the system was shared on social media, but the Libyan army has not yet shared details on the whereabouts of the airstrike.

At least 30 civilians, including women and children, have been killed in attacks on Tripoli by militias loyal to Haftar since the beginning of May.

The Libyan Army recently liberated many towns from Haftar’s militia as part of Operation Volcano of Rage. After that, the military launched an operation to take Al-Watiya air base, located 140 kilometers southeast of Tripoli, from Haftar. The airstrike came as a part of operations to cut supplies to Haftar's militias.

Following the ousting of late dictator Moammar Gadhafi in 2011, Libya's legitimate government was founded in 2015 under a U.N.-led political deal. Since April 2019, the Government of National Accord (GNA) has been under attack by Haftar's forces, based in eastern Libya, and more than 1,000 people have been killed in the violence. In the past few weeks, the GNA has made significant gains against forces loyal to Haftar, supported by France, Russia, the UAE and Egypt, while some provinces announced their support for the official government after months of bombing and shelling by Haftar on civilians, hospitals and schools.

The United Nations says hundreds have been killed and more than 200,000 displaced in the year since Haftar launched his battle for Tripoli, which quickly ground to a bloody stalemate.