1 killed, another injured in attack against Turkish Red Crescent in northern Syria 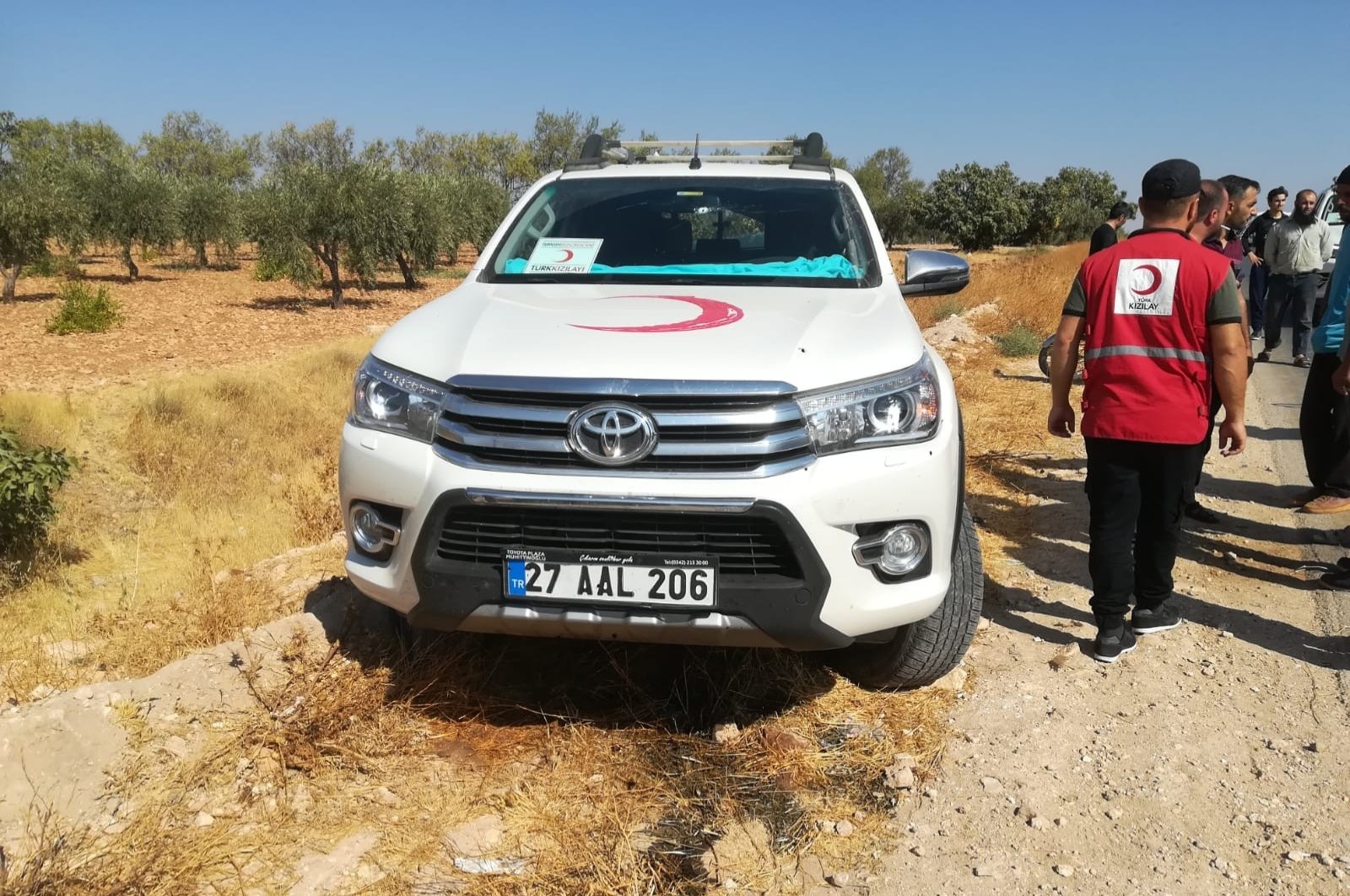 A vehicle belonging to Turkish Red Crescent is attacked in northern Syria by unknown individuals, killing one personnel, Sept.14, 2020. (IHA Photo)
by DAILY SABAH WITH AGENCIES Sep 14, 2020 11:50 am
RECOMMENDED

A Turkish Red Crescent (Kızılay) staff was killed and another injured in an attack against the charity organization's vehicle in northern Syria on Monday.

The Turkish Red Crescent vehicle with three personnel on board was caught in a crossfire between two vehicles without license plates, carrying people wearing masks and camouflage, in an area between northern Syrian towns of al-Rai and al-Bab.

Later in the day, the name of the employee who was killed was revealed as Mehmet Arif Kıdıman.

Turkish flags have been draped along the street where Kıdıman's house is located. Kıdıman's funeral is expected to take place on Tuesday.

The head of the Turkish Red Crescent's Düzce branch Halil Aydın condemned the attack on Monday and labeled it as "terrorism."

"Before anything, this is a terrorist attack, and it targeted a charity organization that aims to deliver aid to innocent people. It has international immunity even in war conditions. That vehicle was in there only to deliver aid. This is a vicious attack that targeted people who were fighting to help," Aydın said.

The region where the attack took place lies within the area liberated from the Daesh terrorist group by the Turkish Armed Forces (TSK) and the Free Syrian Army (FSA) during the Operation Euphrates Shield conducted between Aug. 2016 and March 2017. Since then, Turkish government agencies and non-governmental organizations (NGO) have conducted extensive efforts in the region to rebuild infrastructure, re-facilitate government services and allow safe return of refugees.

Head of the Turkish Red Crescent Kerem Kınık condemned the attack and reportedly traveled to the province to further inspect the incident.

"I believe that with the efforts of our country, the attackers will be caught as soon as possible. My condolences to the entire Red Crescent community," he added.

During a press conference at Gaziantep airport where he landed before moving to Syria, Kınık said that the organization's activities in Syria will continue.

"Both to protect civilians in the region and to provide aid to these people we will continue our struggle," he said, adding that the organization's representatives in Brussels, Geneva and the U.N. are currently engaging in work to involve the international community in the effort.

Noting the organization's joint work with the Turkish Health Ministry in the region, Kınık said aid is crucial for Syria given that millions of vulnerable people in the country have been suffering from instability, conflict and a lack of infrastructure for the past nine years.

"We are obliged to engage in these activities as there is not much else support from the international community to the region," he added.

Turkish Red Crescent also released a statement on its official Twitter account following the incident condemning the attack. It underlined that the attack took place despite the fact that the vehicle had a Red Crescent logo on it.

"All measures have been taken by both our land and air forces in order to find the responsible terrorists, who degraded themselves to the point of attacking an aid agency that has immunity in international law," the ministry said.

Vice President Fuat Oktay stated on his Twitter account that he denounces the attack, expressing condolences to the victim's family as well as wishing health to the injured personnel.

The Turkish Red Crescent is the largest humanitarian organization in Turkey, with a major international network to help nations in need.

The charity, originally established in 1868 as the Society for Aiding the Wounded and Ailing Ottoman Soldiers, also known as Kızılay, is today viewed as an example for its aid operations both at home and abroad.

Whether it is in the Middle East, the Balkans, Africa, the Caucasus, or Asia, the Turkish organization hears the pleas of the needy and offers its best to relieve them of their suffering. The Turkish Red Crescent has responded to the needs in 138 countries in the past decade, making it an international actor in regard to humanitarian aid.

The charity mostly relies on its own resources to lend a helping hand to the needy, especially those forcibly displaced in conflict-hit areas, including northern Syria.