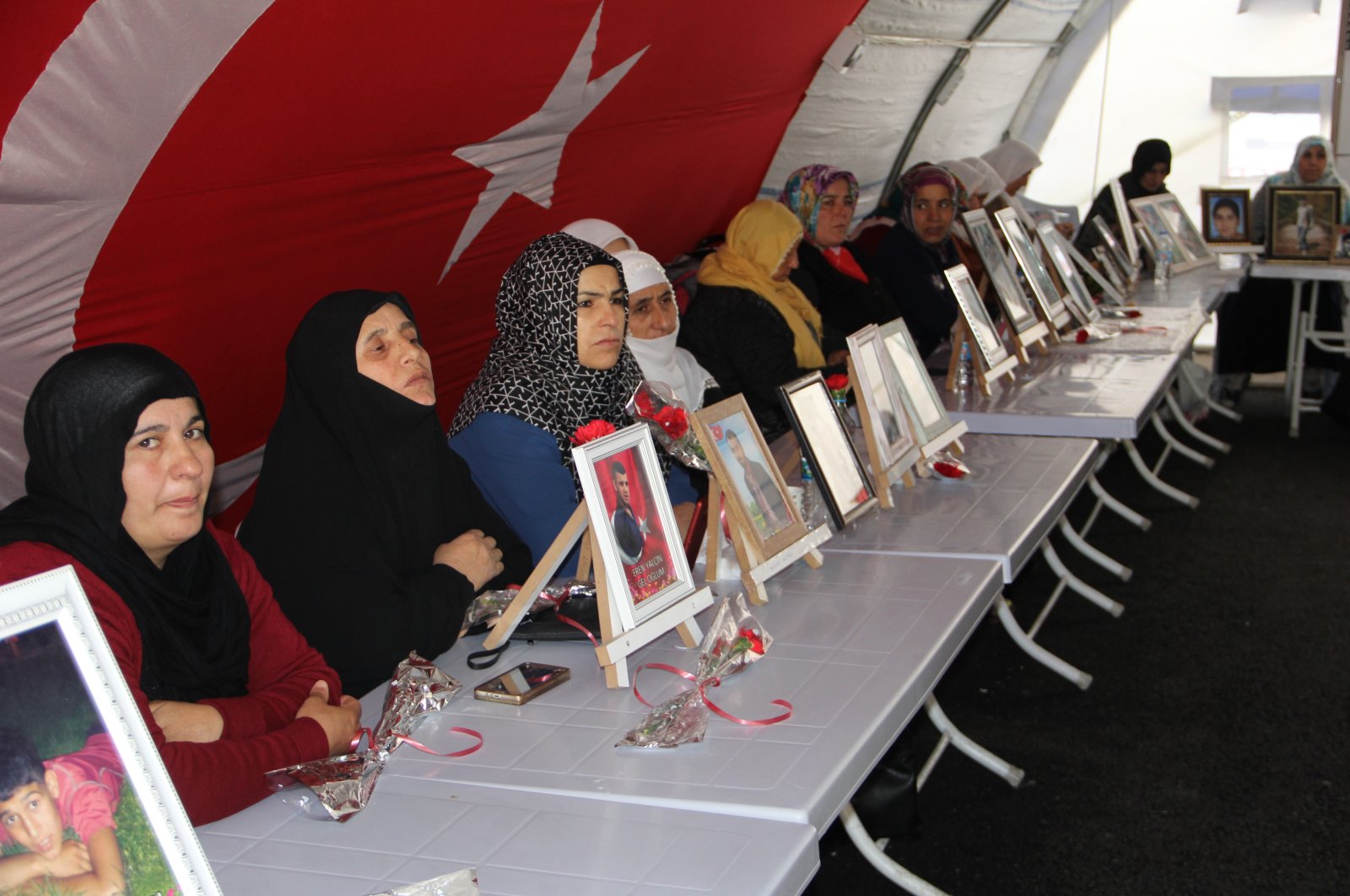 Staging a sit-in protest against the PKK terrorist group for more than six months now, the Kurdish mothers’ determined stance has taken a special meaning in women’s search for justice

As the Kurdish mothers’ protest against the PKK crossed six months, two more mothers were reunited with their children abducted by the terrorist group on March 8, International Women’s Day. Meanwhile, two other families have joined the sit-in protest, taking place in front of the pro-PKK Peoples' Democratic Party (HDP) Diyarbakır headquarters. The protesting parents have demanded the return of their children, who have been kidnapped and taken to the mountains by the PKK.

A statement released by the Interior Ministry on Sunday noted that two suspected PKK terrorists, whose parents have been protesting in front of the HDP headquarters in Diyarbakır, have surrendered to Turkish security forces after joint efforts by the Şırnak and Şanlıurfa Gendarmerie Command units.

Fikriye and Zeynel Abidin Kılıç, the father and mother of Hasan Kılıç, arrived from Şanlıurfa to join the protest launched by Diyarbakır mothers on September 3, 2019. The victims’ families have held HDP responsible for the kidnapping of their children and demanded their return.

Hasan’s mother said her son was deceived and taken to the mountain two years ago while studying at Van’s Yüzüncü Yıl University. "I want my son to come back. If you can hear my voice, son, come back. They fooled you and pulled us apart," she pleaded.

She holds the HDP responsible for her son's abduction and wants her son to get an education and travel around the world. She believes it's impossible that her son went to the mountain on his own accord. “I want the HDP to bring back my son," she said. Hasan’s father said they had gotten involved in the sit-in protest to try to reach their son. He said he and his wife have felt “half-dead” for the past two years of his absence.

Meanwhile, the Koç family joined the sit-in on Sunday urging their daughter to come back home. Her mother, Esmer Koç, from Hakkari’s Şemdinli district, said her daughter Zübeyde had been kidnapped by HDP members in 2013. “My daughter was sold off to the PKK. I have been searching for her for the past seven years,” Koç said. She urged her daughter to surrender. “If you see or hear me, please, surrender to our security forces," she said. "They (the HDP) fooled you and sold you out. Leave those oppressors and escape,” the mother said, adding that she will not leave Diyarbakır until her daughter returns.

Another mother protesting her son’s abduction claimed her son was only 15 years old when he was kidnapped five years ago. Kamile Küçükdağ said her son Engin Küçükdağ had called her only three months after he was forcefully recruited to the PKK, telling his mother that he wanted to escape the terrorist group. She said the terrorist group treated members ruthlessly, and she pleaded with her son to return home and surrender to security forces.

Bilal Avunan said his son Emrah was also abducted by the HDP. “The HDP abducted my son and handed him to the PKK. The PKK cannot enter the town, so HDP officials kidnap the children and hand them to the terrorist group,” he said.

In 2011, families whose children were kidnapped by the PKK gathered for a sit-in protest in Diyarbakır to show their discontent toward HDP officials. Nongovernmental organization (NGO) representatives were also present at the protest and pointed out that abducting a child for war and conflict falls within the U.N.'s remit of crimes against humanity. Blaming the HDP for being indifferent to the fact that children are being handed guns and trained for war, the protesters voiced their anger and asked for the government's help.

The monthslong demonstrations began with a lone protest by one mother, Hacire Akar. Akar demanded the return of her 21-year-old son, Mehmet Akar, who had been missing for three days after he was abducted by the PKK terrorist group. Following her sit-in, and with the help of security forces in Diyarbakır, Akar was finally reunited with her son.

The HDP, long facing public reaction and judicial probes over its ties to the PKK, is under pressure due to this growing civilian protest movement launched by parents and family members of PKK conscripts. The HDP has many times drawn fire for transferring taxpayer money and funds to the PKK, a globally recognized terrorist group. HDP mayors and local officials have been found to misuse funds in support of the terrorist group and provide jobs to PKK sympathizers.

A significant number of suspected terrorists have started fleeing the PKK and surrendering. More than 235 PKK members have surrendered to Turkish security forces in 2019, while more than 40 of the suspected terrorists have surrendered since the beginning of 2020. Once they surrender, they are provided with many opportunities including the right to education and the freedom to live without fear and oppression.

According to their statements, the ringleaders of the PKK terror group risk the lives of recruits to save their own lives and threaten those planning to surrender with torture.

In its more than 35-year terror campaign against Turkey, the PKK – listed as a terrorist organization by Turkey, the U.S. and the European Union – has been responsible for the deaths of nearly 40,000 people, including women, children and infants. The People's Protection Units (YPG) is the PKK's Syrian offshoot.