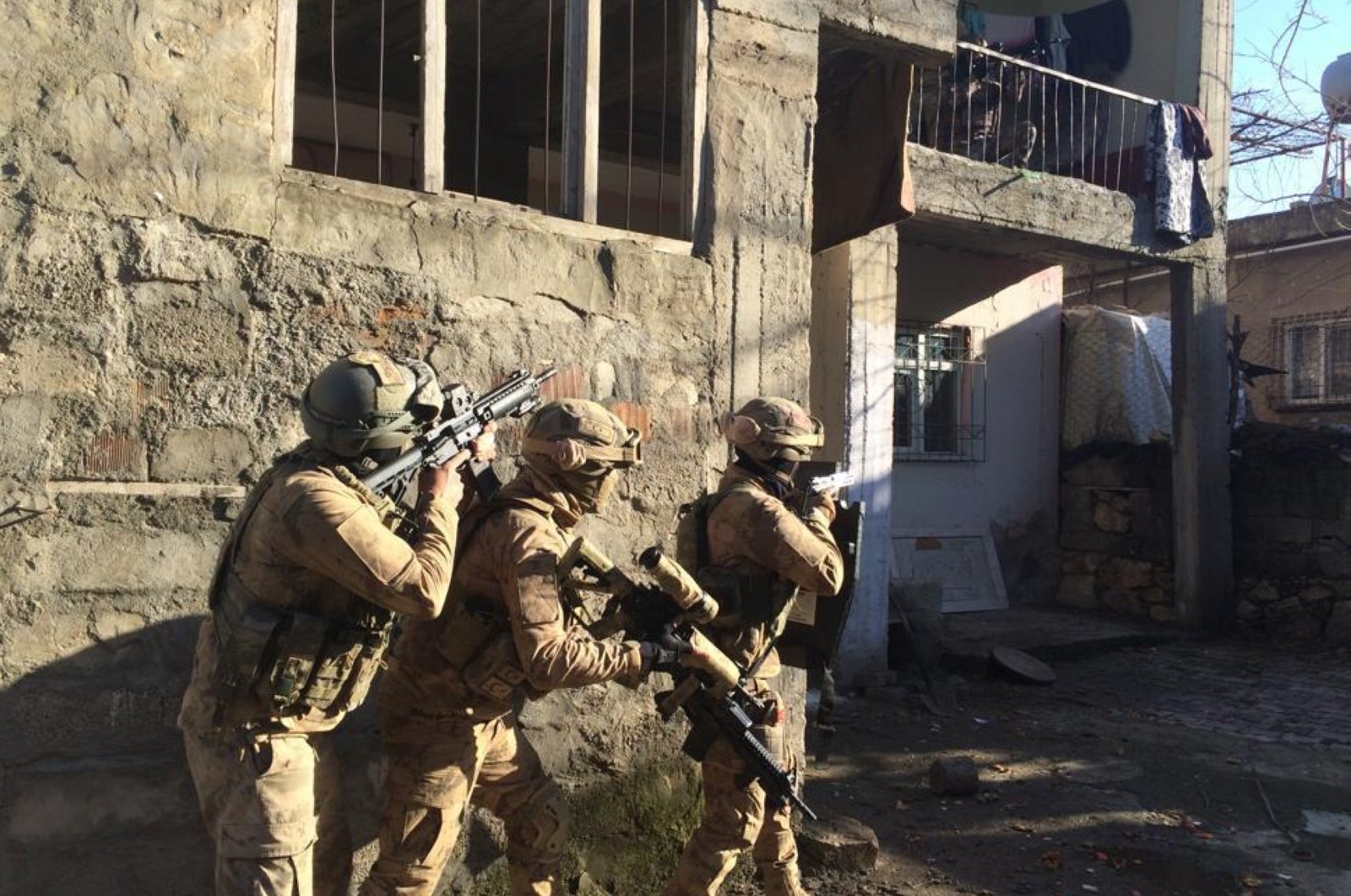 Turkey's security forces regularly conduct counterterrorism operations in the eastern and southeastern parts of the country against the YPG/PKK terrorists. (DHA)
by DAILY SABAH WITH AA Jun 08, 2020 12:19 pm
RECOMMENDED

At least 303 PKK/YPG terrorists were killed and 177 arrested between March 1 and May 31, as the Turkish security forces dealt a major blow to the terrorist group, according to Anadolu Agency (AA).

Out of the 177 suspects, 81 high-ranking terrorists have been put under arrest.

The first operation that netted high-ranking members took place on March 9, when two PKK terrorists, both of whom have been a member of the PKK for over 20 years, were captured in eastern Turkey's Van.

The two terrorists were later identified as the bodyguards of the PKK heads, Murat Karayılan and Cemil Bayık. In their testimonies, they confessed that the PKK was in a panic mode thanks to Turkey's ongoing counterterrorism operations.

In its more than 40-year terror campaign against Turkey, the PKK, listed as a terrorist organization by Turkey, the U.S. and European Union, has been responsible for the deaths of 40,000 people, including women and children. The YPG is the PKK's Syrian offshoot.

The Turkish Armed Forces (TSK) also carries out cross-border operations in northern Iraq, a region where PKK terrorists have hideouts and bases where they carry out attacks on Turkey. The operations intensified in July 2018 and gradually became routine.

The operation in Van was followed by a subsequent operation in northern Iraq on March 10 where five PKK terrorists were killed.

On March 11, another high-ranking terrorist, who was on the Red Category of the Interior Ministry's Most Wanted list, surrendered to the security forces. After surrendering, thanks to the convincing activities of the security forces, Duygu Karayel, codenamed "Siya Munzur," was taken into custody in southeastern Turkey's Mardin.

There has also been a surge in the number of terrorists laying down arms and surrendering to Turkish security forces following these series of successful domestic and cross-border anti-terror operations. About 90 terrorists have so far surrendered to the forces since the beginning of this year

During another operation on March 9, Halide Tarı, codenamed "Ayten Amed," who was a part of the so-called top decision making organ of the women's branch of the PKK, was killed in northern Iraq.

It was confirmed after her killing that Tarı, who was wanted on charges of disrupting the unity and the territorial integrity of the state, has been a member of the terrorist group since the 1990s and was coordinating terrorist groups different branches in northern Iraq's Qandil mountains.

Another terrorist Nazife Bilen, who was also a part of the terrorist group's top decision making organ, was killed on March 30 in a joint operation by the Turkish intelligence and security forces. Later, the security forces reported that Bilen was the highest-ranking woman terrorist that has been killed so far.

On the last two days of April, seven terrorists, four of whom were in the Gray Category of the Most Wanted list, have been killed in the Kağızman district of eastern Turkey's Kars, one of the most critical points in the fight against terrorism.

On April 10, Mahmut Okay, another terrorist in the Orange Category and the so-called leader of PKK eastern Erzurum region was captured in the Varto district of eastern Turkey's Muş.

The PKK youth branch's so-called leader of the southeastern Cizre district, Resul Özdemir, codenamed "Zibo," on the other hand, was brought to Turkey from Sweden on April 22 thanks to coordinated efforts by the two countries' intelligence services. After returning to the country, Özdemir was arrested.

Month of May full of operations

The security forces also had a fast start in May by targeting the terrorist elements since the very beginning of the month. On May 1, one of the suspected perpetrators of the 2011 Ankara terrorist attack that killed five civilians, was captured and arrested in southeastern Turkey's Diyarbakır.

On May 6, five terrorists were killed in the Doğubeyazıt district of the eastern province of Ağrı. One of the killed terrorists was identified as Özer İnce, codenamed "Piro Serhat," who was in the gray category of the Most Wanted list, while another was the so-called leader for the Ağrı Mountain region, Nevzat Pirbudak.

These terrorists were also found to be the perpetrators of a terrorist attack in Doğubeyazıt on March 2 that killed two civilians.

In the Ovacık district of southeastern Tunceli province, three terrorists were killed on May 7, one of whom was identified as Mehmet Fatih Demir, codenamed "Mahsum," who was in the Gray Category of the Most Wanted list. He was one of the perpetrators of a terrorist attack that killed a gendarme commander in 2016.

At the end of the month, on May 30, Interior Minister Süleyman Soylu announced that five terrorists have been killed in the southeastern province of Siirt, including the so-called leader for the Harekol Mountain region. "Harekol headquarters of the terrorist group has collapsed," the minister said.

In a similar statement on May 31, Soylu confirmed that three more terrorists were killed in the southeastern province of Bitlis, one of whom was the perpetrator of a terrorist attack that killed two gendarmerie commanders last year.

During this process, while the security forces were targeting the terrorists, the PKK continued its attacks not only toward the Turkish military but also on civilians.

One of the biggest terrorist attacks on civilians took place on May 14.

Workers of Vefa Social Support Group, which was formed to assist people during the pandemic, were attacked while returning from a quarantined neighborhood in Van's Özalp district. Two members of the group were killed in the attack.

According to a statement from the Van Municipality following the attack, the group was in the neighborhood to distribute aid. After their work was done in the region, they were attacked by terrorists using long-barrel weapons.

Vefa Social Support Groups were initially formed to respond to the needs of people older than 65 whose mobility has been restricted as part of coronavirus measures. Public workers, such as police, gendarmerie, security forces and personnel of Turkey's Disaster and Emergency Management Authority (AFAD), not only meet the needs of senior citizens but also provides protective equipment including masks, cologne, hand soap and disinfectants. The groups have been formed under the supervision of the district municipalities all over the country, and a call center has been established for people to obtain the group's services.