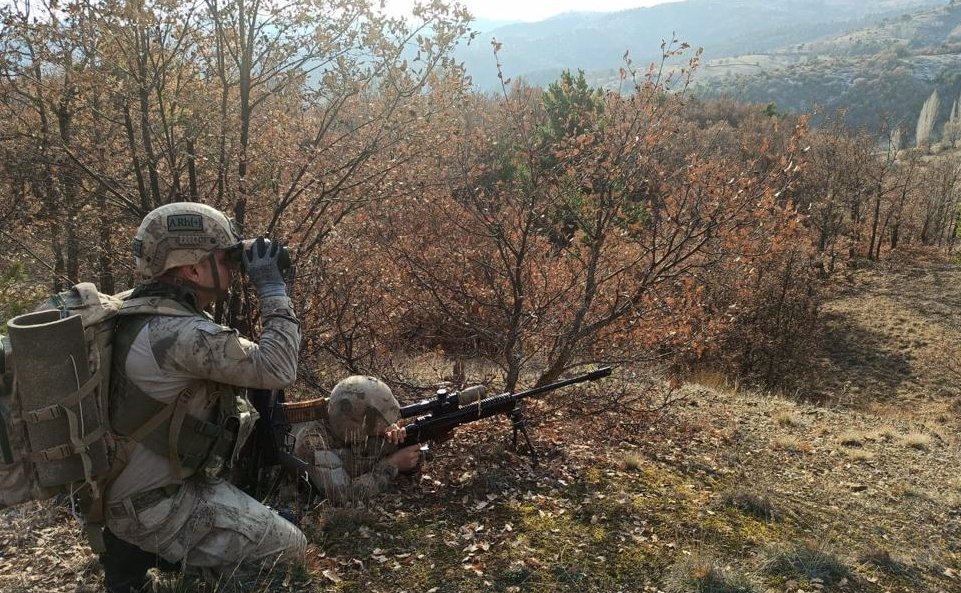 "A total of 243 of the surrendered terrorists have stepped down from the mountains after being persuaded by their families," Çataklı said in a press conference in Ankara.

The dissolution of the PKK has accelerated due to Turkey's successful counterterrorism operations and strategies both at home and abroad.

As a result, in 2016, 79 terrorists surrendered to security forces, the number increasing in every subsequent year. In 2017, the number reached 105 while in 2018, it was 165. In 2019, however, the process gained remarkable momentum by almost doubling the number of the previous year as 273 terrorists were convinced to surrender.

However, persuasion is not the only method that encourages terrorists to surrender. The terrorists who managed to escape the PKK during Turkish military operations and the ones who had nowhere else to flee also tend to surrender to the security forces.

In addition to the surrenders, the demand to join the PKK also remarkably fell over the years, even to the point that there is little to no interest in being apart of the terrorist group anymore. According to the statistics, while the number of people who joined the PKK was 703 in 2016, this number fell to 161 in 2017 and 136 in 2018. In 2019, the number fell to 108.

Apart from surrendering, the captured PKK terrorists are also given the chance to be confessors in order to benefit from the effective remorse law and eventually decrease their punishment level.

The latest example of such took place on Tuesday as a physiotherapist PKK member captured in southeastern Şanlıurfa province identified 14 other terrorists as part of their cooperation with the authorities.

The terrorist, with the initials A.H., claimed in their statement that they joined the terrorist group back in 2014. The terrorist said that they moved from southeastern Mardin province to Syria thanks to the help they received from a columnist whose paper was shut down with a decree-law.

Anadolu Agency (AA) reported that the terrorist also gave information on the terrorist group's inner structure while claiming that they never participated in a terrorist attack against Turkey.

"I've received training in Qandil (where the PKK's headquarters are located) for 40 days. During this process, they explained to us how to use weapons theoretically. After the training, they gave us weapons and appointed me to the health section. I didn't know what to do and was waiting for something to happen. Then, one night, four PKK terrorists came. They took me somewhere and said, 'You have a job to do.' We came to a field. They removed a blanket and Cemil Bayık (a senior PKK leader) came out of it. They told me that I had to cure Cemil Bayık," the terrorist said in their testimony. They also claimed that after a while, they left the terrorist group.

Despite all these encouraging developments signaling the overall decline of the PKK, the wounds that were caused by the terrorist group in past years still linger in people's memories as the pain of losing their loved ones never goes away.

Turkey on Tuesday commemorated the fourth anniversary of the killing of police officer Fethi Sekin, who intercepted a vehicle carrying explosives in Turkey’s third-largest city and in doing so, prevented many more deaths.

Hikmet Kurum, Sekin’s uncle, told AA that his nephew had foiled the evil plan of the PKK, which had planned the attack.

Stressing that Sekin is a source of pride for his family and all of Turkey, Kurum added:

“His killing is the greatest sign of this country’s unity with its Turkish, Kurdish, Alevi, Sunni, Laz and Circassian peoples. He showed the world that no one will be able to divide and separate this country.”

The PKK terrorist attack took place on Jan. 5, 2017, just outside the main courthouse in the Aegean city of Izmir, when Sekin, 43, stopped a suspicious vehicle, which turned out to be carrying explosives.

Realizing he had intercepted a terrorist plot, Sekin opened fire on the terrorists, triggering a firefight between the terrorists and security forces and preventing many deaths among members of the public.

The clash and a car bomb left Sekin and court official Musa Can dead and nine others injured.

The PKK itself also tries to keep these terrifying memories alive by claiming that it is still actively and regularly conducting terrorist attacks, refusing the terrorist group's decline in power.

On Monday, the Interior Ministry stated that the PKK claimed responsibility for 1,262 acts, including arson and armed attacks, in 2020, but over 800 of these never actually happened.

The ministry said in a written statement that using its supporting groups, the PKK claimed responsibility for activities that did not take place as the group has suffered from Turkey's anti-terror operations and declining recruitment.

In a bid to survive, the separatist terrorist group claimed to have set 632 buildings and forests on fire, including houses, factories, shops, warehouses and malls.

It also claimed responsibility for 487 acts of terrorism, including the burning of transportation and construction vehicles and the hanging of illegal banners and slogans, the ministry said. The terrorist group also falsely claimed that it carried out 143 attacks on security forces throughout the year.

A check of the data of Turkish security forces found that 829 of these acts claimed by the PKK had not actually occurred and that the group had no involvement with the 403 others.

The terrorist group and its supporters were responsible for only 25 of them while being linked to five others.

Some 17 suspected PKK terrorists thought to be involved in attacks were remanded in custody after 47 suspects were arrested, the ministry added.