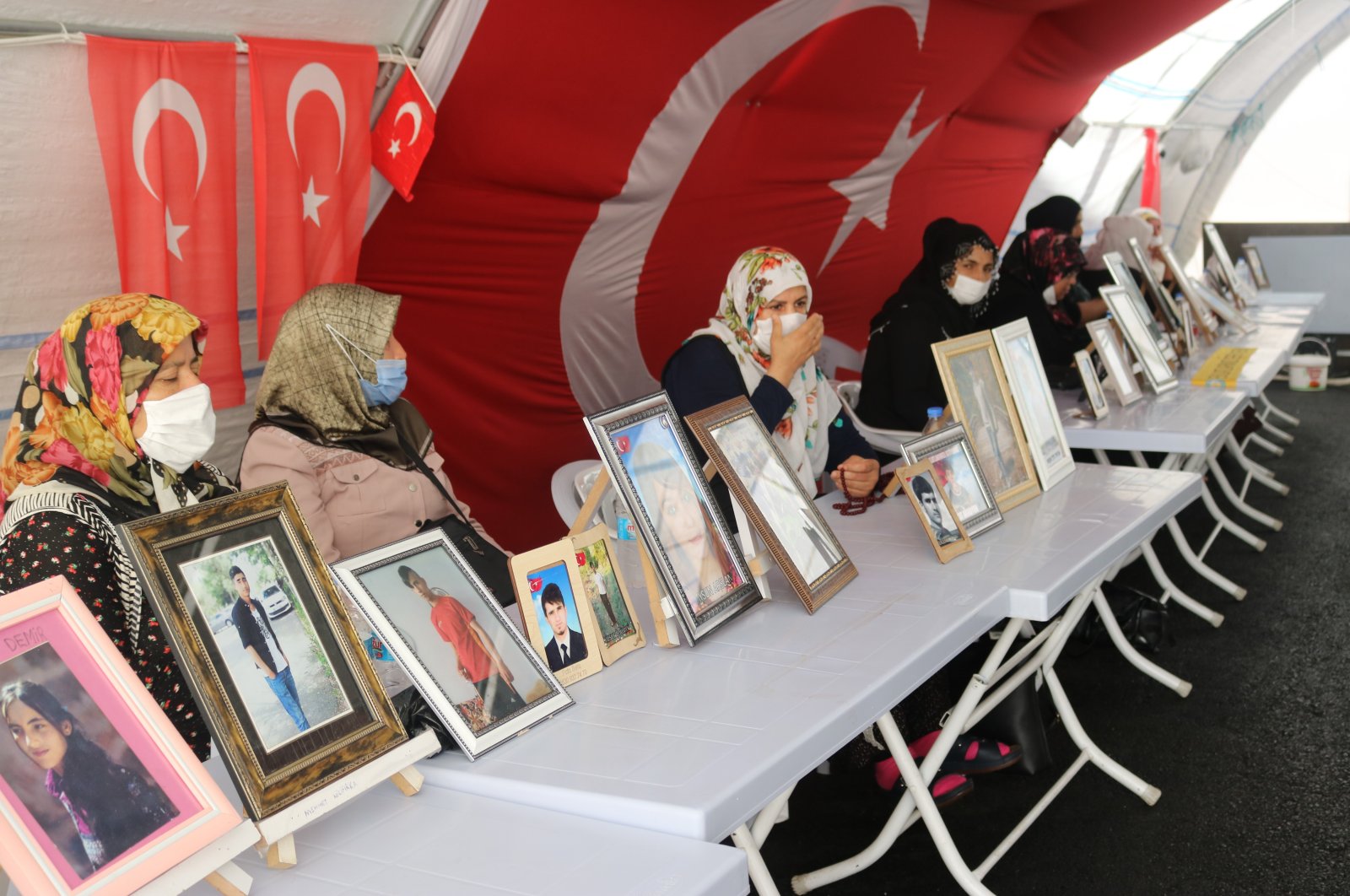 Kurdish mothers have been staging a sit-in protest in front of the pro-PKK Peoples' Democratic Party (HDP) headquarters in southeastern Diyarbakır province since Sept. 3, 2019. (IHA)
by DAILY SABAH WITH AA Sep 02, 2020 12:30 pm
RECOMMENDED

A year has passed since Kurdish families started to stage a sit-in protest in front of the pro-PKK Peoples' Democratic Party (HDP) headquarters in southeastern Diyarbakır province, demanding the return of their children kidnapped by the PKK. So far, their struggle has paid off as 15 families have been reunited with their kin. However, more than 100 others remain determined to protest until they reach the same goal.

Hacire Akar was the first to start the protest. She claimed her son was kidnapped and taken to the mountains on Aug. 22, 2019. She then started a sit-in protest in front of the HDP headquarters. After she was reunited with her son as a result of her sit-in, other mothers began to hope for the return of their own children.

Subsequent protests began on Sept. 3, 2019, and more parents gradually joined the demonstrations. Today, families from different Turkish provinces come together to share the pain of being separated from their children. Neither winter conditions, nor the pandemic has managed to stop these parents from chasing their rightful cause.

Shortly after the protests began, President Recep Tayyip Erdoğan called on Interior Minister Süleyman Soylu to accelerate security force activities against the terrorists, so that the mothers can take back their children.

As a result, the Ceylans became the next family to be reunited with their child on Dec.10, 2019. Hatice, the mother, was once again able to hug her son Cafer, who was kidnapped by the PKK five years ago.

Hüsniye Kaya, another mother participating in the protests, received good news on Dec. 26, 2019, as her daughter Mekiye surrendered to security forces after escaping from a terrorist hideout in the mountains of northern Iraq. Mekiye was also kidnapped by the PKK five years ago when she was only 14.

On Jan. 10, 2020, Halime Kadran, a grandmother, found her kidnapped grandson İbrahim Halil Kadran, while the Eşrefoğlu family was reunited with their son on Feb.11, 2020, after almost five years.

That was followed by the Aslan family's reunion with their son Volkan on Feb.18, 2020, almost six years after he was taken.

Muteber Birlik was reunited with son Veysi on Feb. 25, 2020 as he surrendered to security forces, while the Alkan family was reunited with their son Mehmet Emin on Feb. 27, 2020. He was kidnapped five years ago when he was only 16.

On the same day, Şahize Altınkaynak also got back her daughter Halise, who was kidnapped six years ago.

On March 9, 2020, 27-years-old Tekosin Açar surrendered to the security forces and hugged her mother Naime Dalmış after almost six years.

Cemal Ertaş, a disabled father, met with his 20-year-old son Ramazan on July 9, 2020, after he had been kidnapped eight months earlier.

Sever Fidan's 11 years of longing for her son, Tayfur, ended on July 16, 2020, as he surrendered to security forces in the southeastern province of Mardin.

Security forces use persuasive techniques to save children who have been kidnapped and deceived by the PKK. They collaborate with families, and in the last four years, 698 people have escaped from the PKK and surrendered to Turkish security forces. In the last year alone, at least 125 terrorists have been persuaded to give themselves up.

According to Turkey's Effective Remorse Law, which is Article 221 of the Penal Code of Turkey, if a terrorist surrenders, provides information about the group and explains his or her voluntary departure from the group, no penalty will be imposed on them.

The HDP is known for having links to the PKK. The protesting mothers believe the party is responsible for kidnapping or tricking their children into joining the terrorist group. The HDP, long facing public reaction and judicial probes over its ties to the PKK, is under pressure from this growing civilian protest movement. Various groups from around Turkey have supported the Kurdish mothers in their cause, with many paying visits to show their support.

One year on, the protesiting families and the nongovernmental organizations (NGO) helping them, are disgruntled at the HDP for remaining silent over the accusations against them.

A protesting father, Celil Begdaş said he last saw his son Yusuf last year in the HDP headquarters. He claimed that he found Yusuf's coat in a room in the building and believes his son was taken through the back door.

"None of the [HDP] deputies, authorities came here and asked 'what are you doing here?' They insult us when they are passing by. Why is the HDP silent? It serves their purpose to remain silent," the sorrowful father said.

Labeling the HDP headquarters as a branch of the PKK, Begdaş said his son was at first tricked and then kidnapped by the youth arm of the HDP.

"I will not leave this place until my son returns," he said.

Solmaz Öğünç, a Kurdish mother whose 15-year-old son Baran was taken almost five years ago, refutes HDP's claims that as a political party it works for the welfare of the Kurdish people.

"If HDP deputies were my deputies, if they were defending me, they would come here and bring my son," she underlined and added: "I call them the 'thief party.' They are not my party."

The head of Turkish NGO Mazlum-Der's Diyarbakır branch, Mahmut Aytekin, on the other hand, said it is the families' natural right to demand their kids back.

"There is no way the HDP can escape this issue. It needs to face this. It needs to side with families protesting here. It cannot conduct its business by simply ignoring these people," Aytekin said, adding that all children must be delivered to their families immediately.

Ibrahim Gökdemir, the coordinator of the Diyarbakır Belief Freedom Platform, lauded the "honorable struggle" of the families and reminded that the HDP has never been the voice of justice or freedom.

"The HDP does not have any words against the PKK because it is a party formed by the PKK itself. It is not a party that has emerged from within the people. Thus, the HDP can only speak whenever the PKK lets it do so," Gökdemir expressed.

The head of the Diyarbakır Publicity and Development Association, Abdulkadir Arslanoğlu, also said that the social wing of the fight against terrorism started with the Kurdish mothers' protest.

Highlighting the support that the families have received from all corners of the country, Arslanoğlu expressed that this strong backing has made the HDP realize how "helpless" it is.

"[The HDP] realized that if it has a reaction, it will have to suffer major costs. Thus, it developed a strategy of remaining silent against the protests," he said.

The head of the Human Rights Community, Mehmet Karadağ, pointed at the humanitarian aspect of the issue and said none of the organizations that are in defense of human rights can remain silent on this issue.

"Despite all the legal regulations and international agreements, children are still somehow tricked into being taken to the mountains and forced to participate in the conflict. This is a tragedy," he said.