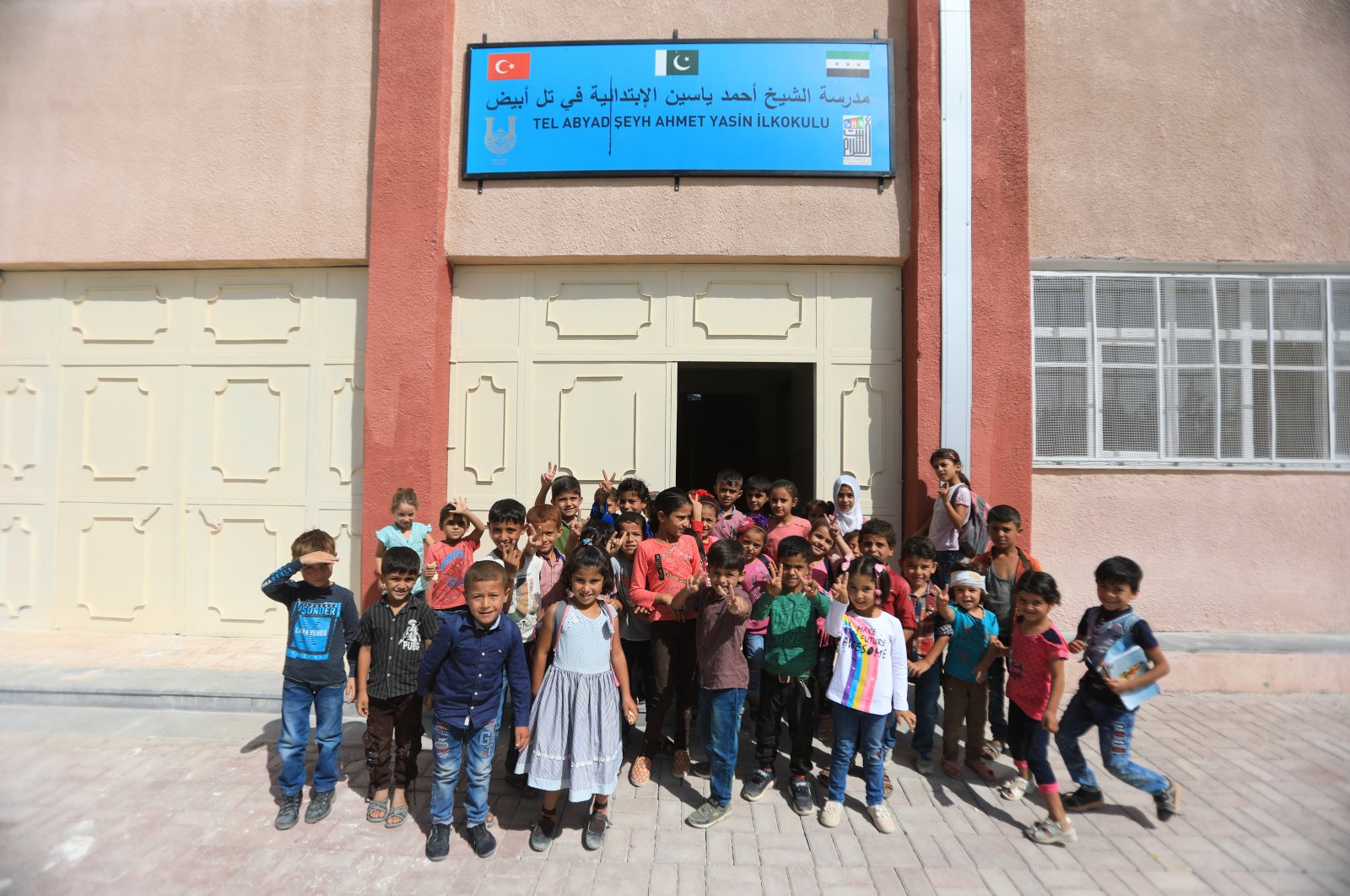 A year has passed since Turkey launched its third cross-border operation into northern Syria, Operation Peace Spring, aiming to liberate the towns of Ras al-Ain and Tal Abyad from YPG/PKK terrorist occupation. Achieving success in a short time, the Turkish military not only cleared most of the terrorist elements from the region but also normalized everyday life, a move welcomed by the locals, who have expressed deep appreciation for Turkey's efforts.

"Despite all the difficulties, our region has achieved peace at last; we are in peace," said Abu Marwah, a local farmer in Tal Abyad.

Abu Marwah said the local farmers export their products to Turkey and purchase Turkish agricultural products to meet their own needs, as well.

The operation, conducted in line with the country's right to self-defense borne out of international law and U.N. Security Council resolutions, aimed to establish a terror-free safe zone for Syrians return in the area east of the Euphrates River, which was then controlled by the U.S.-backed YPG terrorists.

"We have reopened the doors to our shops. The situation in bazaars gets better every day," said Ahmad Khalil, who runs a perfumery in Ras al-Ain. Once displaced from the town due to the terrorist occupation, Khalil managed to return to his hometown thanks to the normalization of life following Operation Peace Spring.

Underlining that there are still bombings that target civilians in the town from time to time, Khalil expressed that no matter what, they are determined to continue living in the region.

"We believe that in the future, our trade relations will also improve," he said regarding his hopes for the economic development of the town.

The country also rolled-up its sleeves to reconstruct hospitals, schools, mosques and roads destroyed by the YPG/PKK. Within the scope of ameliorating the region's social infrastructure, people were given food and clothing by several nongovernmental organizations while roads and buildings were rebuilt. These efforts paid off as hundreds of displaced Syrians started to return to the liberated areas.

Hosting more than 3.6 million Syrians and spending billions of dollars on their needs, despite the ongoing conflict, Turkey now looks to establish prosperous settlements and improve the living conditions for Syrians in northern Syria.

A grocer in Tal Abyad, Salih Hamdan, pointed to the liveliness of the bazaar, located in the center on the city.

"There are blessings and fruitfulness in every corner of Tal Abyad. The bazaars are always crowded. Thank God!" Hamdan said.

Agreeing with Hamdan, butcher Mohammad Vasıl also celebrated the commerce in the bazaar.

"Tal Abyad has been restored with its people," he said, adding that there is stability in the region now and the locals have recovered for the most part.

Today, the civilians in the region have access to free health services in both of the towns. Each town has its own hospital, with additional multiple health care centers.

Once used as military bases by YPG/PKK terrorists, the schools in the towns are also being renovated and revived by Turkey. Thanks to these efforts, a total of 422 schools in the region are ready to provide for the needs of thousands of school children.

The operation not only stabilized the atmosphere in northern Syria but also in some border districts of Turkey, especially Şanlıurfa's Akçakale, which faced frequent terrorist attacks in the past.

"Today, thank God, we have a secured district and do not see any terrorist flags waving from across the border. The border gate is open now, there is trade ongoing with major mobility. When we put all these on top of each other, we see a very different Akçakale than before," said Mehmet Yalçınkaya, the mayor of the district.

Still, the district continues to recover from its wounds from the deaths of civilians killed in attacks by the YPG/PKK.

"We have been saying for ages that if we would not have intervened there (northern Syria), they (the terrorists) would intervene here. Thus, it was mandatory for Turkey to eliminate the YPG/PKK from the region," said Mehmet Yoğurt, whose father Halil Yoğurt was killed during one of the terrorists' missile attacks on the district during the operation.

"Although our father was killed, we are still happy. Our wound is still fresh, but we are glad that we got rid of the YPG/PKK terrorists," Yoğurt said, adding that the district's situation is much better than it was before the counterterrorism operation.

Yoğurt also appreciated the support Turkey has provided for his family since his father was killed.

"If there would be a demand now for soldiers, we are all ready to fight for our country," he said.

Halil Yoğurt's wife Şaha, on the other hand, said she is still deeply wounded by the death of her husband and yet expressed gladness for the elimination of the terrorists from the region.

During the operation, YPG frequently launched retaliatory strikes on civilian-populated areas in Turkey. Dozens of mortars were fired to Akçakale, targeting not only locals but also the journalists operating in the area.

Another major loss for the city was the killing of 9-month-old Syrian infant Mohammad Omar, who fell victim to a missile attack. Omar's family keeps his memory alive by placing photos of the infant around the house and finds solace in the fact that his killers have been eliminated from the region thanks to Operation Peace Spring.

"It is not possible to forget him (Mohammad). He was our son but, if God wanted to take him, there is nothing we can do," said Mehmet Hani, the infant's father, adding that thanks to Turkey's efforts, they finally feel safe in the region.

Having another child shortly after Mohammad's death, his mother Fatime Hani said that her newborn smells just like Mohammad.

"I will never forget the brutalities of the YPG/PKK," the grieving mother said.