Another Kurdish family reunites with son kidnapped by PKK 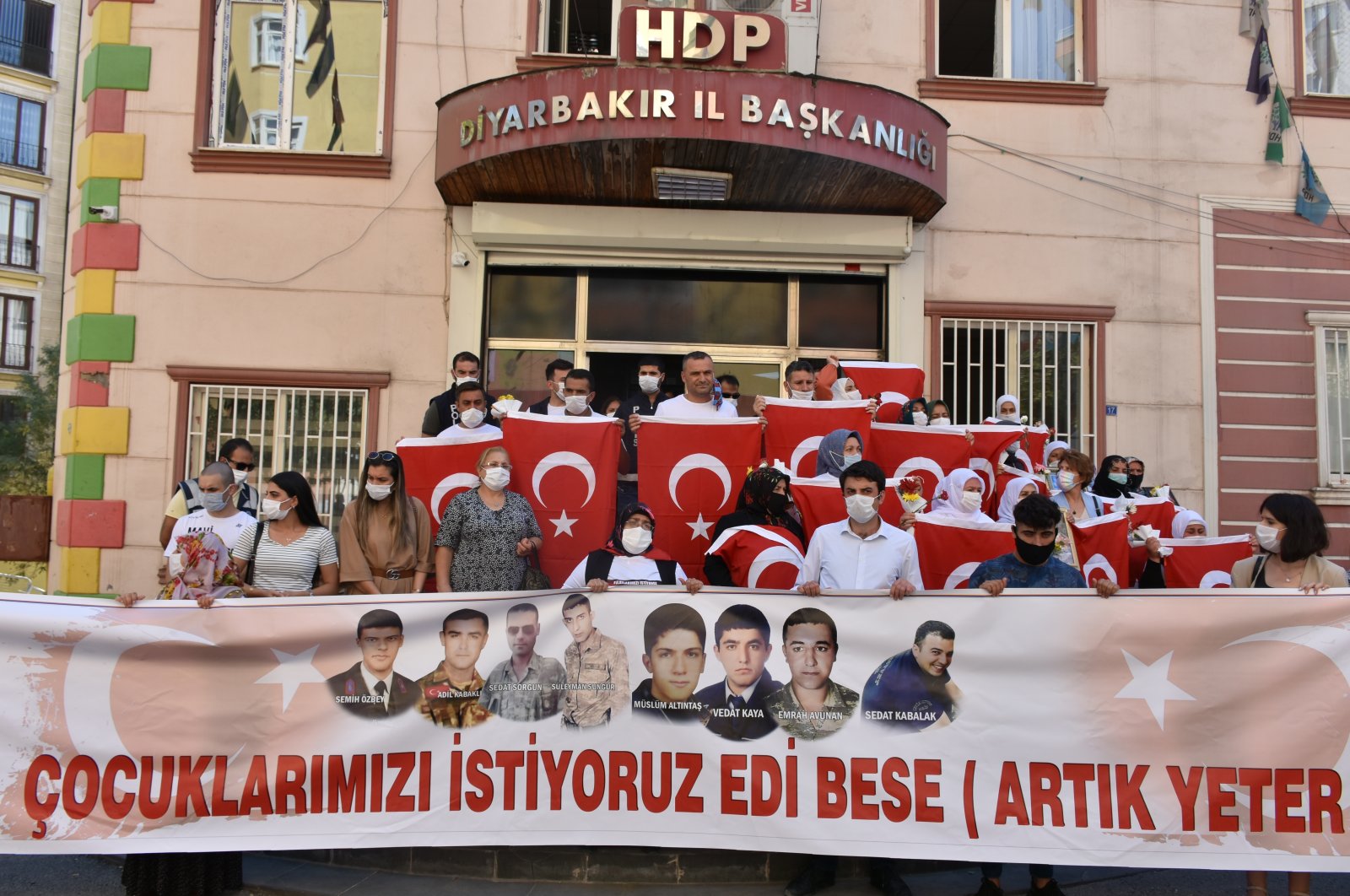 Families protesting PKK in front of the HDP headquarters in Diyarbakır hold a banner with the pictures of kidnapped children and writing saying "We want our children back, enough" on it, Sept. 3, 2020. (AA)
by DAILY SABAH WITH AGENCIES Sep 03, 2020 2:48 pm
RECOMMENDED

One more family that was participating in the sit-in protest in front of the pro-PKK Peoples' Democratic Party (HDP) headquarters in southeastern Diyarbakır province has managed to achieve their goal as the family's long-lost son, kidnapped by the PKK five years ago, surrendered on Wednesday.

Erkan, who was kidnapped by the terrorist group five years ago when he was only 19 years old, turned himself into security forces in Diyarbakır, almost a year after his parents, Fahrettin and Meryem Akkuş, started to participate in the anti-PKK protests.

Expressing that he cannot wait to come together with his son, father Akkuş, who also has a physical disability, stated that his happiness is beyond measure.

"I couldn't believe it at first when they called me to inform that my son surrendered. I've become so happy and cried so much," Akkuş said. Remembering the five years of suffering, he added: "I always had a hope that he would return one day. And now, he came back."

The sorrowful father added that he saw Erkan in his dreams four days ago in which he said, "Father, I'm on my way."

"It is as if I am reborn," said Akkuş, who was in Istanbul when he received the news and came immediately to Diyarbakır afterward.

With the surrender of Erkan, the number of protesting families who have reunited with their kidnapped children has reached 16. However, more than 100 others still remain determined to protest until they reach the same goal.

Hacire Akar was the first to start the protest. She claimed that her son was kidnapped and taken to the mountains on Aug. 22, 2019. She then started a sit-in protest in front of the HDP headquarters. After she was reunited with her son as a result of her sit-in, other mothers began to hope for the return of their own children.

Subsequent protests began on Sept. 3, 2019, and more parents gradually joined the demonstrations. Today, families from different Turkish provinces come together to share the pain of being separated from their children. Neither winter conditions, nor the pandemic has managed to stop these parents from pursuing their cause.

Security forces use persuasive techniques to save children who have been kidnapped and deceived by the PKK. They collaborate with families, and in the last four years, 698 people have escaped from the PKK and surrendered to Turkish security forces. In the last year alone, at least 125 terrorists have been persuaded to give themselves up. According to Turkey's Effective Remorse Law, which is Article 221 of the Penal Code of Turkey, if a terrorist surrenders, provides information about the group and explains his or her voluntary departure from the group, no penalty will be imposed on them.

The HDP is known for having links to the PKK. The protesting mothers believe the party is responsible for kidnapping or tricking their children into joining the terrorist group. The HDP, long facing public reaction and judicial probes over its ties to the PKK, is under pressure from this growing civilian protest movement. Various groups from around Turkey have supported the Kurdish mothers in their cause, with many paying visits to show their support.

Meanwhile, as the protests mark their one year anniversary, yet another family joined the movement on Thursday and urged their son who was kidnapped seven years ago to return home.

Coming from eastern Muş province, Ribabşa Baykara aims to bring back her son Azad, who was only 18 when abducted by the PKK.

"I want my son back, nothing more," Baykara said in Kurdish.