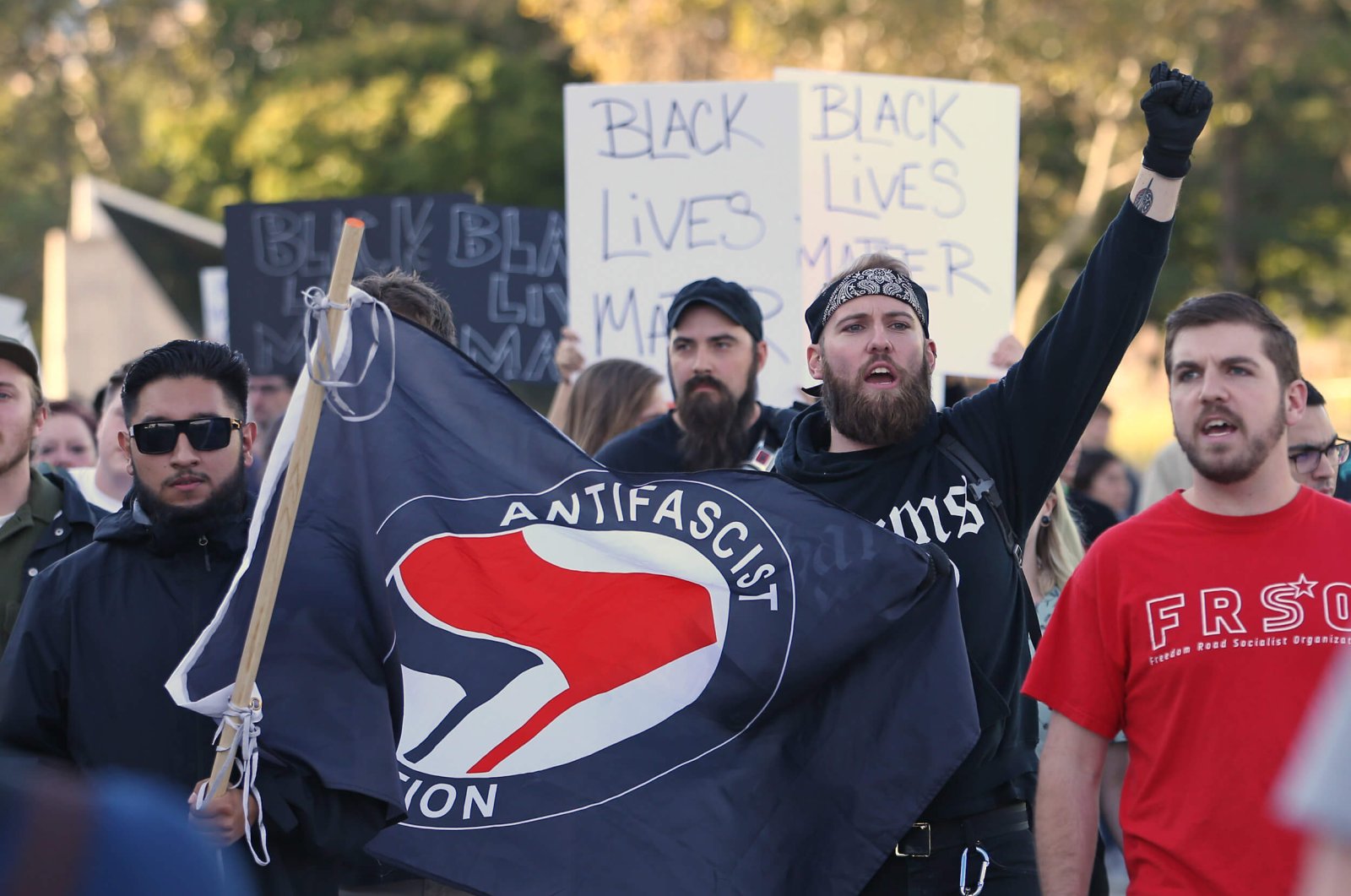 Antifa, a group with suspected ties to various terrorist organizations and a presence in the Syrian civil war, widely shares the same ideological ground and tools as the PKK to achieve its ultimate goals

As U.S. cities burn, President Donald Trump points a finger at Antifa, a group with strong ideological parallels with the terrorist organization PKK and its offshoots in Syria.

With the revelation of the strong links between the terror groups under the pretext of fighting Daesh in Syria, their ideological commonalities and the use of similar tools to create violence and terror to reach their ultimate political goals have also come to light.

Trump’s designating Antifa as a terrorist organization amid protests raised questions over affiliated terror groups. As protesters took to the streets in the U.S., a striking statement came from Trump on Sunday, when he tweeted that the U.S. would designate the loosely knit, radical-leftist militant, so-called anti-fascist network, Antifa, as a terrorist organization. “This is an ANTIFA Organization,” he said, accusing the group of orchestrating violence in the country.

Trump's statement came after widespread protests emerged throughout the U.S. after an unarmed, handcuffed black man was killed by four police officers during an arrest in the U.S. city of Minnesota. Floyd's death elicited rage, and thousands have flooded to streets of Minneapolis to voice that "black lives matter," while the protests occasionally turned violent with fires and lootings.

Meanwhile, U.S. Attorney General William Barr also blamed Antifa activists for hijacking peaceful protests after George Floyd’s death. "The violence instigated and carried out by Antifa and other similar groups in connection with the rioting is domestic terrorism and will be treated accordingly,” Barr said in a statement last weekend.

Now all eyes are on the future indicators of the president’s statement, namely whether the U.S. would designate other terrorist groups in affiliation with Antifa, such as the PKK’s offshoots in Syria, YPG/PYD/SDF and women's branch YPJ, similarly in the near future.

Though the name surfaces frequently now during the protests, this is not the first time the U.S. has been dealing with Antifa, which is short for anti-fascists.

The Congressional Research Center (CRS) in a report in 2018 described the group as anti-fascist and “appearing to be decentralized, consisting of independent, radical, like-minded groups and individuals” while it stressed that a portion of Antifa movement members is willing to commit crimes to promote their beliefs.

According to CRS, since 2016 counterterrorism experts at the Federal Bureau of Investigation (FBI) have been increasingly concerned about violence perpetrated by Antifa supporters at public rallies where they confront their ideological opponents.

“Presumably, the Bureau would investigate Antifa followers suspected of criminal activity as domestic terrorists, categorizing them as a type of anarchist extremist. FBI Director Christopher Wray has suggested as much, noting that the Bureau has opened counterterrorism investigations into people committing crimes in the name of Antifa beliefs,” the report said.

Saying that violence by U.S. Antifa members is not new, the report mentioned a previous protest in 2017 in Portland, Oregon, and Charlottesville, Virginia.

Antifa in Syria along with PKK’s offshoots

What makes Antifa a potential threat are its ideological similarities to the YPG/PKK and its other branches in Syria, a terrorist organization which is engaged in a terror campaign against Turkey for over 40 years and is listed as a terrorist organization by Turkey, the U.S. and European Union. The organization has been responsible for the deaths of 40,000 people, including women, children and infants in Turkey.

For years there have been concerns and reports on the international stage that Antifa elements have joined the PKK terrorist group’s Syrian offshoot the YPG, allies of the U.S. in Syria which have been receiving significant training and aid under the pretext of fighting Daesh.

Hundreds of civilians from Western nations have volunteered to fight among the ranks of the YPG in Syria to fight Daesh while a radicalized few even joined Daesh. Many Westerners inclined to the ideas of the radical left, joined the terrorist organization attracted by their talk of building an independent state in Syria.

Mark Bray, a history lecturer at Rutgers University and the author of “Antifa: The Anti-Fascist Handbook,” explains the ideology of Antifa in his book and the obvious similarities with the PKK.

Bray argued that jailed PKK leader Abdullah Öcalan was mostly inspired by American author Murray Bookchin's notion of libertarian municipalism, which led him to shift away from his Marxist-Leninist line toward horizontalist principles he called “Democratic Confederalism,” which is an ideological doctrine widely embraced by the Antifa.

Surprisingly, the PKK has defined Bookchin as "one of the greatest social scientists of the 20th century" and vowed to put his ideas into action. In 2016, the PKK’s Antifascist International Tabur as part of the YPG was established in Syria, a unit mostly comprised of Westerners including communists, socialists and anarchists including Antifa. The unit is known to have taken part largely in the Syrian civil war.

Rolling Stone Magazine in its 2018 dated article, “The Untold Story of Syria’s Antifa Platoon,” tells how the YPG trained anti-fascists coming from the Western world and the initial times of the group under its first commander Italian-Moroccan Karim Marcello Franceschi. The article wrote that in the hills of northeastern Syria, at a remote compound everyone called the Academy, which was basically a former oil facility turned into a training camp, volunteers from the U.S. and Europe received their training to fight alongside the YPG.

“The Antifa Platoon operated in a legal no man’s land with no oversight apart from the SDF’s loosely organized command,” the article said.

On the other side in 2017, the International Revolutionary People’s Guerrilla Forces (IRPGF), part of the PKK network, announced their establishment and ideologies, describing themselves as a horizontal collective working to defend social revolutions. Saying that the IRPGF is committed to anti-fascism, it mentioned its ties to the YPG, its sister group the YPJ, the PKK, the Antifascist International Tabur and the International Freedom Battalion’s member organizations.

All these, indicate strong similarities between the ideologies of the PKK and Antifa.

All eyes on YPG after US’ Antifa statement

Turkey, a country that has been fighting terrorism for years, has frequently warned the U.S. against its support of the YPG, saying that it could backfire. Yet despite Turkey’s warnings and security concerns, the U.S. has provided military training and has given truckloads of military support to the YPG. Although it claimed numerous times that Daesh had been defeated, the U.S. support of the YPG continues.

The $740.5 billion Pentagon budget proposed by the U.S. government this year will continue to provide funding for YPG/PKK terrorists in Syria, but it will slash it by a third compared with the previous year, while it includes more funding for nuclear weapons, research and development spending. The SDF is an umbrella organization predominantly led by the terrorist PKK's Syrian wing YPG.

Meanwhile increasing numbers of actors in Washington argue that the U.S. administration invested in and supported the YPG so much in the fight against Daesh that it would be counterproductive to abandon this investment solely because of Turkey’s criticisms and complaints.