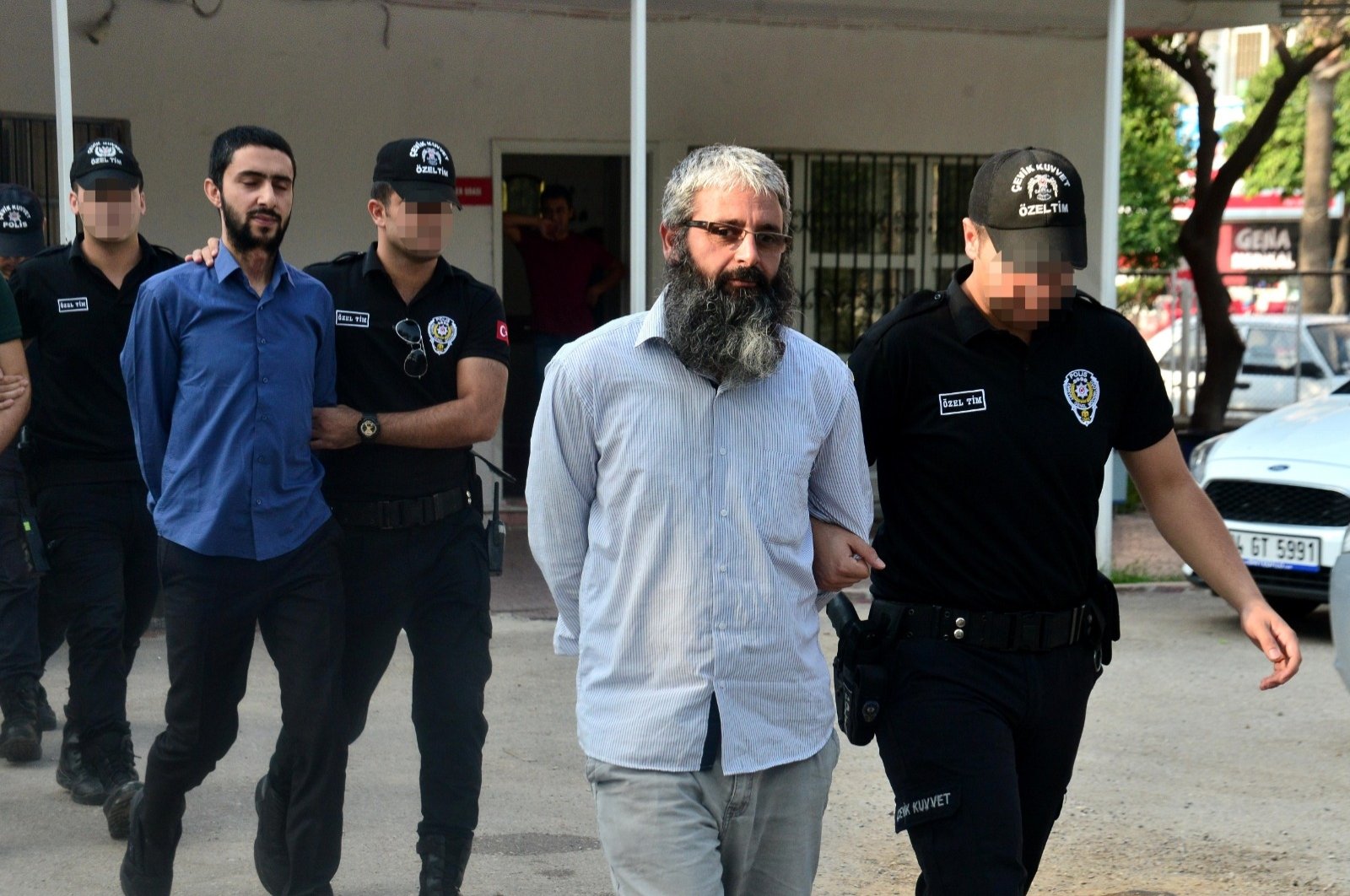 The so-called "Turkey emir" of Daesh terrorist group, Mahmut Özden and another suspect behind him are transferred by Turkish security forces to the courtroom in Adana, southern Turkey, Sept. 1, 2020 (DHA Photo)
by DAILY SABAH WITH AA
Sep 30, 2020 1:46 pm

A suspect who faces 15 years behind bars in Turkey for being a member of Daesh confessed Wednesday that the terrorist group's masterminds ordered their militants to carry out an attack each month in Turkey.

The suspect, identified by his initials I.K., confessed that the terrorist masterminds used to send so-called “official” letters stamped with the Daesh symbols, which informed them of their duties, and carrying out a terror attack each month was one of them.

I.K. said in the testimony that these orders were sent to Mahmut Özden, who was recently arrested for being responsible for Daesh’s Turkey operations.

“Özden was sent these letters in April and May of 2019, from directors of the organization living abroad. In line with the orders, an attack against the police and on touristic hotels was planned,” he said.

The suspect added that the targeted hotel was in southern Adana province and that the terrorist group planned to take tourists hostage.

I.K. also said that the Daesh terrorist group was not able to continue with the plans after its members were arrested by Turkish security forces.

“Even though Daesh members were supposed to never cut their beards due to internal policies, they were allowed to do so for stealth,” he said.

According to the Anadolu Agency (AA) report, the suspect was willing to help Turkish authorities capture other Daesh terrorists to take advantage of the effective remorse law.

The suspect also confessed that he was in communication and engaged with Daesh terrorists and was active within the terrorist group.

I.K. said that one of his friends from high school brainwashed him into becoming a member of Daesh, and he contacted Daesh terrorists in Syria over Telegram, a Russian-made messaging app abused by terrorist groups due to its privacy-oriented features.

The suspect said he started attending Daesh meetings in the summer of 2019, and the terrorists informed him that Özden was in charge of their Turkey operations as the group’s so-called “Turkey emir.”

“I learned that high-ranking members got in touch with only Özden and nobody else. I also learned that Daesh members in Turkey got permits directly from Özden to be able to get in touch with members in Syria. Özden used to provide the Telegram link to the group members, and they used to talk through their system of encryption,” he said.

The suspect said that Özden and three other Daesh members personally gave lectures to the new members.

“The organization used to send written orders stamped with Daesh emblem to Özden. These orders were genuine and they included directives to what to do and what to abide by. The lessons were organized as a two-cadre system, one for new members and one for veterans,” he said.

I.K. also said that the group told them recruiting new members for Daesh would be “more beneficial than any other act we can do on the face of the earth.”

“Özden told us that he got a directive from Syria and the organization needs money. The organization used to collect money and that sum would be sent to members in Syria via Özden. I heard that some of this money was given to the families of Daesh members killed in battle,” he said.

I.K. further stated that the armed attacks, stabbings, threats and battery perpetrated by the group's members were done with weapons belonging to the group.

“The acts perpetrated in Adana were carried out with the group’s weapons. Daesh had AK-47s, Thomsons, pistols, automatic rifles, as discussed by group members. Those weapons were under the control of Özden, and only his son Hamza knew where they were hidden. Besides, his son Hamza was responsible for recruiting militants for the group. He used to make itineraries to Syria for joining the group, and would send the new members to R.B., who pledged allegiance to Daesh in Syria,” he concluded.

I.K. added that he regrets his activities with the terrorist group.

The trial of I.K. and the other suspect E.M. will start in upcoming days.