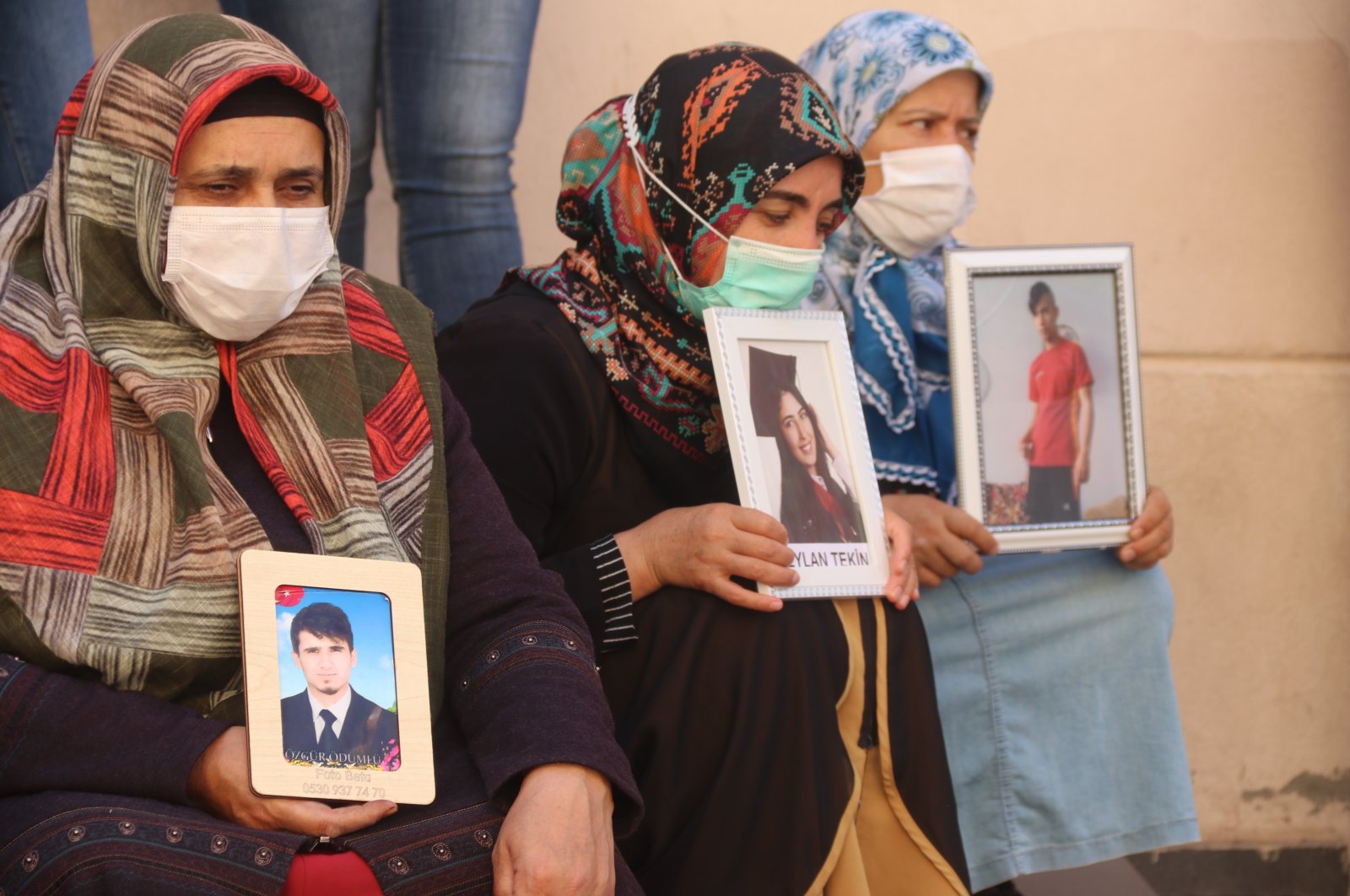 Mothers whose children have been abducted by the PKK terrorist group continue to stage their protest in front of the Peoples’ Democratic Party's (HDP) headquarters in Diyabakır, Turkey, Oct. 12, 2020. (AA Photo)
by Daily Sabah with Wires Oct 14, 2020 12:04 pm

The PKK continues to enjoy a safe haven in Europe, even though it is officially recognized as a terrorist group in the European Union, Anadolu Agency (AA) said in a report Wednesday.

According to the report, the rhetoric of the PKK is usually voiced as “the view of the Kurds” in the press of countries like Germany, France, the Netherlands and Sweden.

Nevertheless, newspapers and other news outlets in these countries almost never report on the Diyarbakır mothers waiting for their children in front of the pro-PKK Peoples’ Democratic Party (HDP) headquarters in the southeastern province.

The group of aggrieved families has been staging a sit-in protest against the YPG/PKK terrorist group for over a year.

Hacire Akar, who claimed her son was kidnapped and brought to the mountains by the PKK and its Syrian wing the YPG, started a sit-in protest in front of the Diyarbakır headquarters of the pro-PKK Peoples' Democratic Party (HDP) on Aug. 22, 2019. After she was reunited with her child on Aug. 24 as a result of her determined struggle, other mothers began to gain hope.

Taking Akar's struggle as an example, three more mothers – Fevziye Çetinkaya, Ayşegül Biçer and Remziye Akkoyun – started a fresh sit-in in front of the HDP building on Sept. 3, 2019, and the protest has been growing day by day since then. The number of families coming from all over the country to protest the pain of being separated from their children reached 150.

According to the AA report, the pro-PKK attitude of the press is repeated by the European officials too. For example, a former European Commission member Johannes Hahn met HDP’s European representative Eyüp Doru, who was wanted with a Red Notice over terrorist activities, in 2016. Furthermore, meetings attended by so-called European leaders of the PKK are organized each year in the European Parliament, despite strong condemnations by Turkish officials.

On the other hand, the only European diplomat that has paid a visit to the Diyarbakır mothers has been the United Kingdom’s Ankara envoy Dominick John Chilcott.

According to the AA report, it is known that France is one of the countries with closest ties to the PKK, as the terrorist group has managed to get support from several presidents ranging from François Mitterand to the incumbent Emmanuel Macron through different means.

Macron especially upped his support to the terrorist group by inviting its members to the Elysee Palace in April 2019.

After the meeting, a statement from the palace said that “active support” of the terrorist group is guaranteed to continue.

Since then France has not only become present in areas under occupation by YPG/PKK forces, but French military advisers have also started training terrorists in the Ain Issa base in Syria.

Allowing PKK members to stage rallies in Paris and other French cities, the Macron administration continues to favor the terrorist group while PKK sympathizers attend demonstrations in front of the European Council headquarters in Strasbourg and demand freedom for the terrorist group’s leader Abdullah Öcalan, who is serving an aggravated life imprisonment sentence in Turkey since 1999.

Despite all this, there has never been a word from French officials regarding Diyarbakır mothers.

Only the left-leaning Liberation newspaper reported in a piece on Jan. 6 that nearly 30 families are waiting for their children in front of the HDP headquarters in Diyarbakır.

The piece emphasized that the families accused the HDP of helping the PKK abduct their children and also included remarks by Yıldız Ballı, one of the mothers staging the protest.

“My daughter Yasemin has been missing since 2014. She was abducted by the PKK. I want her back. If she’s dead, I want her corpse back,” she was quoted as saying in the piece.

Nevertheless, the article also said that the HDP denies its organic ties to the PKK and that the mothers’ protest is somehow “tied to the appointment of trustees to HDP municipalities.”

Turkish authorities have appointed trustees to municipalities run by the HDP over links and financial support to PKK terrorist group.

Like in France, the German press also voices PKK rhetoric even though it is recognized officially as a terrorist group in Germany.

Not publishing any pictures from funerals of civilians and soldiers killed by the PKK, the German press continues to cover funerals of terrorists killed in battle.

The German press has also failed to properly report on a sorrowful mother living in Berlin, while authorities also ignored her struggle.

Protesting in front of the Brandenburg Gate, Maide T., a Berlin resident, previously said that she and several other families, whose children were also recruited by the PKK, will be filing a lawsuit against Germany for failing to ensure their return.

"We will sue the German state, which has not done anything to bring our children back. I will file the lawsuit with other families who are in the same situation," she said, adding that six families have joined her so far.

The mother also harshly criticized the German press. “I of course would expect support from the German media, but 11 months have passed but not a single German journalist has come to ask me what I’m doing. But when you look at the newspapers, you see the rhetoric trying to legitimize what the PKK does. They are talking about impartial journalism and press freedom but they ignore what they don’t like,” she said.

Maide T. urged other families to join their struggle.

Maide has been trying to find her daughter, Nilüfer, since Nov. 12, when she was kidnapped by the PKK. Yet, all her efforts seem to be in vain as German police refuse to help her.

The PKK – which is classified as an "ethnonationalist" and "separatist" terrorist organization by the European Union law enforcement agency, Europol – has been banned in Germany since 1993.

"Why would you (European countries) support PKK, YPG?" asked Çavuşoğlu on Tuesday during a joint news conference with Swedish counterpart Ann Linde.

“We expect more solid steps from Sweden in the fight against terrorism. PKK terrorist members engage in attacks on our citizens in the country, including on Kurdish people and carry out forcible money collection,” he added, underlining strongly that none of these activities comply with the notion of freedom of speech and that those activities, including the financing of terrorism, are activities banned by international law.

Çavuşoğlu also urged Sweden to make a clear distinction between terrorists and Kurdish people and that the PKK does not represent all Kurds.

The top diplomat urged Sweden to pay heed to the oppression the minority groups in Syria underwent at the hands of the PKK. There are many Kurdish organizations besides the PKK, the minister pointed out.

Çavuşoğlu further suggested Sweden listen to the minorities in Syria regarding their views on the PKK. "Please listen to the Arameans, the Assyrians, the Christians and let them explain what the SDF did to them. Listen to the Kurds in Syria, to those in Turkey that cannot go back to Syria."

The PKK continues using the European Union's territory for propaganda, recruitment, fundraising and logistical support activities, according to a report by the EU's law enforcement agency released this June.