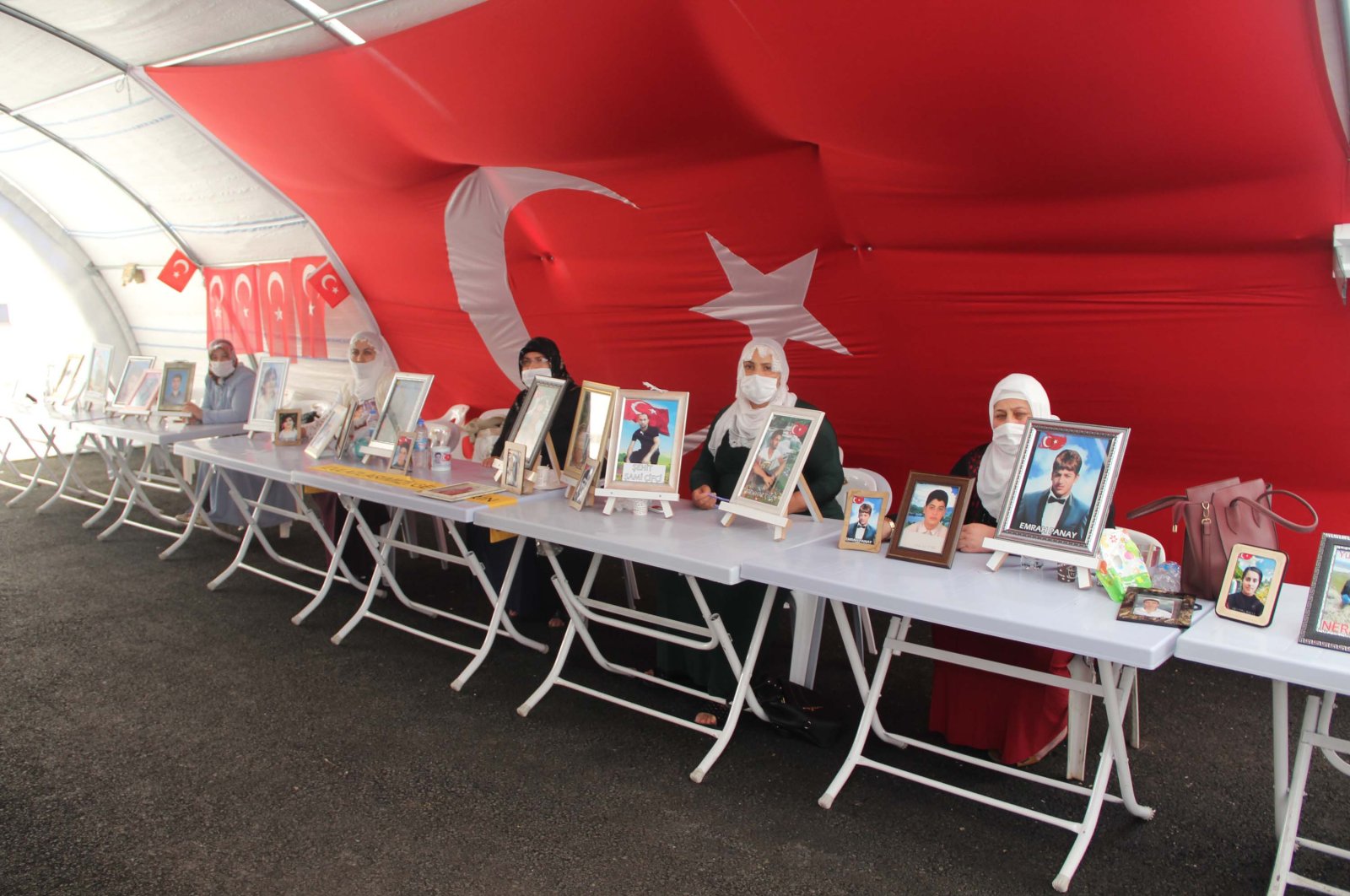 Families protesting the abduction of their children by the PKK continue their sit-in in southeastern Diyarbakır province for the 314th day, July 12, 2020. (DHA Photo)
by DAILY SABAH Jul 12, 2020 1:42 pm
Edited By Dilara Aslan
RECOMMENDED

Another family has joined the ongoing sit-in protest against the PKK terrorist organization in Turkey’s southeastern Diyarbakır province.

Haci Güger, a father from Diyarbakir's Sur district, is the latest to join the sit-in. He said his son, Doğan, was deceived and kidnapped by the terror group five years ago.

The protest started when Hacire Akar one night turned up on the doorstep of the pro-PKK Peoples' Democratic Party's (HDP) Diyarbakır office. A week later, on Sept. 3, 2019, families inspired by Akar transformed her solo stance into a collective sit-in protest. As a result, Akar’s son Mehmet returned home on Aug. 24, offering hope to other families. Since then, the number of protesting parents has grown as they demand the return of their youth, who they claim have been deceived or kidnapped by the terror group.

On the 314th day of the sit-in, the families are still determined not to leave the HDP’s door until their sons and daughters have returned, sitting with photos of missing loved ones in their hands.

Güger said he decided to join the protest after seeing disabled father Cemal Ertaş who also protested the terror group and was reunited his son last week as a result of Turkish security forces’ efforts.

A significant number of suspected terrorists have started fleeing the PKK and surrendering while many terrorists lack the courage to leave the group because they would face severe punishment if caught. The number of terrorists who surrendered through persuasion since the beginning of this year has risen to approximately 100, while efforts are ongoing to ensure the surrender of the terror group members.

The Interior Ministry in recent times has frequently been voicing that the dissolution of the PKK has accelerated due to Turkey's successful counterterrorism operations and strategies both at home and abroad.

The 22-year-old terrorist, identified by the initials M.B., had joined the PKK in 2015, and after persuasion efforts by the security forces, she turned herself in at a border post in the Nusaybin district of southeastern Mardin province. She was brought to Şırnak province, where she met her two sisters and brother-in-law.

M.B. said she joined the terror group due to familial reasons in 2015 and was part of the YPJ, the women's wing of the YPG/PKK terrorist organization in northern Iraq and Syria.

She said she was encouraged by those who had fled the terror group to reunite with their families, adding she regretted having joined the group in the first place.