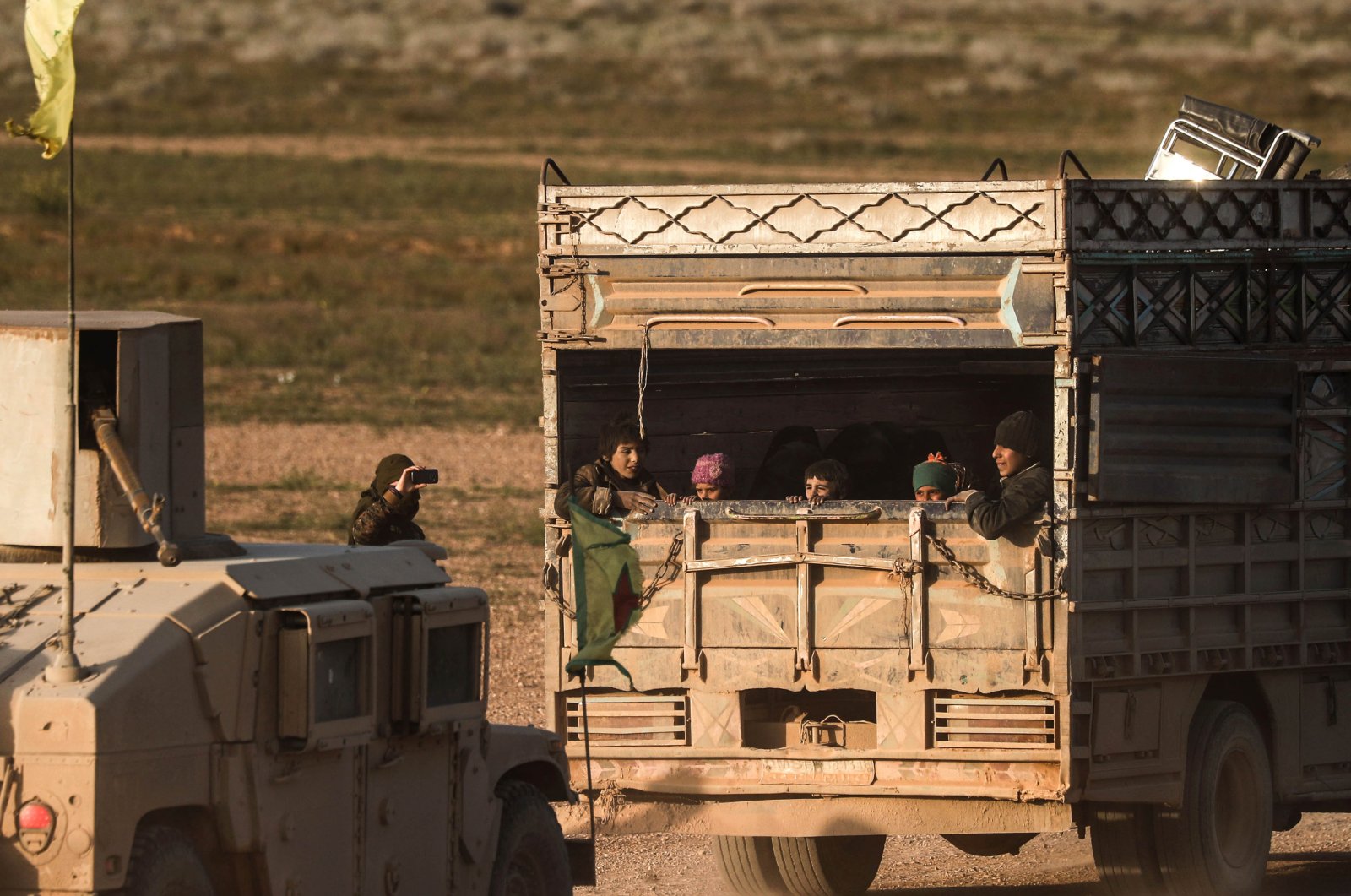 People evacuated from the Daesh terrorist group's embattled holdout of Baghouz sit in the back of a truck on Feb. 25, 2019.
by Daily Sabah with AFP Jun 22, 2020 11:20 am
RECOMMENDED

The French government announced Monday that it had brought home 10 French children of Daesh terrorists overnight from a refugee camp in Syria, the latest in a piecemeal repatriation process since the terrorist group was ousted from its Syrian base in March 2019.

"France has carried out the return of 10 French minors, orphans or humanitarian cases, who were in camps in northeast Syria," the foreign ministry said in a statement.

"These children have been turned over to French judicial authorities, are receiving medical treatment and have been taken in by social services," it said.

The ministry did not provide details on the parents of the children.

France has now repatriated a total of 28 children from war-torn Syria, where hundreds of its citizens went to fight alongside Daesh terrorists as they tried to establish a so-called "caliphate."

Rights groups have urged the government to quickly bring home at least the minors who were brought by their parents to the conflict zone or born there during the years of fighting.

But many of the estimated 300 French children being held in the YPG/PKK-run camps in Syria are with their parents who are terror suspects, and France has insisted that French nationals must face local justice.

The international community has been fighting Daesh for years, but this bloody group has remained undefeated thanks to its militias.

Despite being generally reluctant to bring back former Daesh members, the case of repatriating children is another issue, with the United Nations urging countries to take action.

Previously, on Jan. 31, the Parliamentary Assembly of the Council of Europe (PACE) urged European countries to repatriate the children of Daesh fighters stranded in Syria and Iraq.

In her speech, PACE Commissioner for Human Rights Dunja Mijatovic said the children of Daesh fighters are not responsible for their parents' decision to join terrorist groups, and the children should not be left to die there to "heal the wounded souls of the victims of terrorism."

Currently, some 12,000 foreigners, 4,000 women and 8,000 children are being held at three camps for displaced persons in northeast Syria, most at al-Hol, where aid groups say they suffer from malnutrition and disease. The main problems of the camps are unhygienic sinks and shower cabins, torn tents, expired food and the lack of medicine for those suffering from chronic illnesses.

The camp is a holding place for civilians who escaped the conflict in Deir el-Zour, along with the families of former Daesh members who surrendered and captured terrorists. Most of the civilians were forcefully brought to the camp by the YPG/PKK in April 2017.

YPG/PKK terrorists have called on countries to take back their detained citizens, warning that they do not have the resources to guard prisoners indefinitely.

Although the 1961 New York Convention made it illegal to leave people stateless, several countries including France have not ratified it, and recent cases have triggered prolonged legal battles.

On May 21, the Center for the Analysis of Terrorism (CAT) announced that 13 French Daesh terrorists, including Hayat Boumedienne, the partner of one of the three men who carried out deadly terror attacks in Paris in January 2015, have escaped custody in Syria on May 21.

The escaped foreign terrorists, who were mainly held in the al-Hol and Ain Issa camps, accounted for about a 10th of all French Daesh militant women held in Syria, said Jean-Charles Brisard, one of the co-founders of the CAT.

He said the women's escape showed the "inability" of local authorities to guarantee the detention of foreign terrorists.