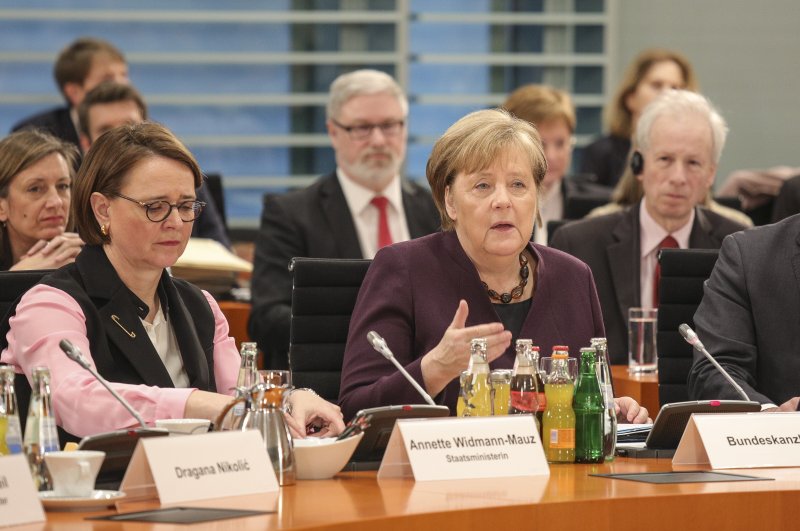 German Chancellor Angela Merkel (R) and Minister of State for Migration, Refugees and Integration Annette Widmann-Mauz (L) are seen during the 11th Integration Summit held at the federal chancellery in Berlin, Germany, March 02, 2020. (EPA Photo)
by Compiled from Wire Services Mar 04, 2020 11:20 am
RECOMMENDED

German Chancellor Angela Merkel has told fellow conservative lawmakers she is in favor of setting up safe zones in northern Syria, two participants who attended the meeting told Reuters on Tuesday.

RIA news agency cited the Kremlin as saying earlier on Tuesday that Putin discussed the situation in Syria's Idlib region with Merkel in a telephone call.

The call came as fighting intensified in Syria's Idlib region where Turkey and allied opposition groups are battling Russia-backed Syrian regime forces. Nearly a million people have been displaced there in recent months.

On Wednesday, Germany's defense minister renewed the country's call for the establishment of a "protected zone" in northwestern Syria for millions of civilians fleeing the attacks of the Bashar Assad regime.

Defense Minister Annegret Kramp-Karrenbauer told German news agency dpa that the European states should shoulder more responsibility to de-escalate tensions and pave the way for a political solution to the conflict in Syria.

"It is good that Chancellor Merkel remains in contact with French President Emmanuel Macron and Turkish President Recep Tayyip Erdoğan on whether a protected zone would be helpful to ensure the urgently needed humanitarian assistance for the people in the region," she said.

Kramp-Karrenbauer sharply criticized Russia's support for the Assad regime and voiced skepticism about Moscow's commitment to the 2018 Sochi deal with Ankara to de-escalate tensions in the northwestern Syrian province of Idlib.

She argued that unlike Russia, "the EU and NATO are reliable partners of Turkey."

Germany's defense minister called on the U.S. and European partners to further increase their pressure on Russia after escalating tensions in northwestern Syria.

"I believe that the EU and the U.S. must now simultaneously put more pressure on (Russian President Vladimir Putin) and Assad to pave the way for a political settlement to the Syria war," she said.

Nearly 4 million civilians have been trapped in the last opposition stronghold of Idlib due to the recent military offensive of the Assad regime, with the support of Russia and Iranian-backed forces in the region.

Turkey launched Operation Spring Shield on Sunday after 36 Turkish soldiers were killed in an Assad regime airstrike in Idlib. They were stationed there as part of the 2018 Sochi deal with Russia to protect the civilian population and counter-terrorist groups.

In 2018, Turkey and Russia had agreed to turn Idlib into a de-escalation zone in which acts of aggression were expressly prohibited.

But the regime and its allies, including the Iranian-backed forces, have consistently broken the terms of the cease-fire, launching frequent attacks inside the territory.

More than 1,300 civilians have been killed in the Idlib de-escalation zone in such attacks, sending 1.7 million refugees toward Turkey's border with Syria.