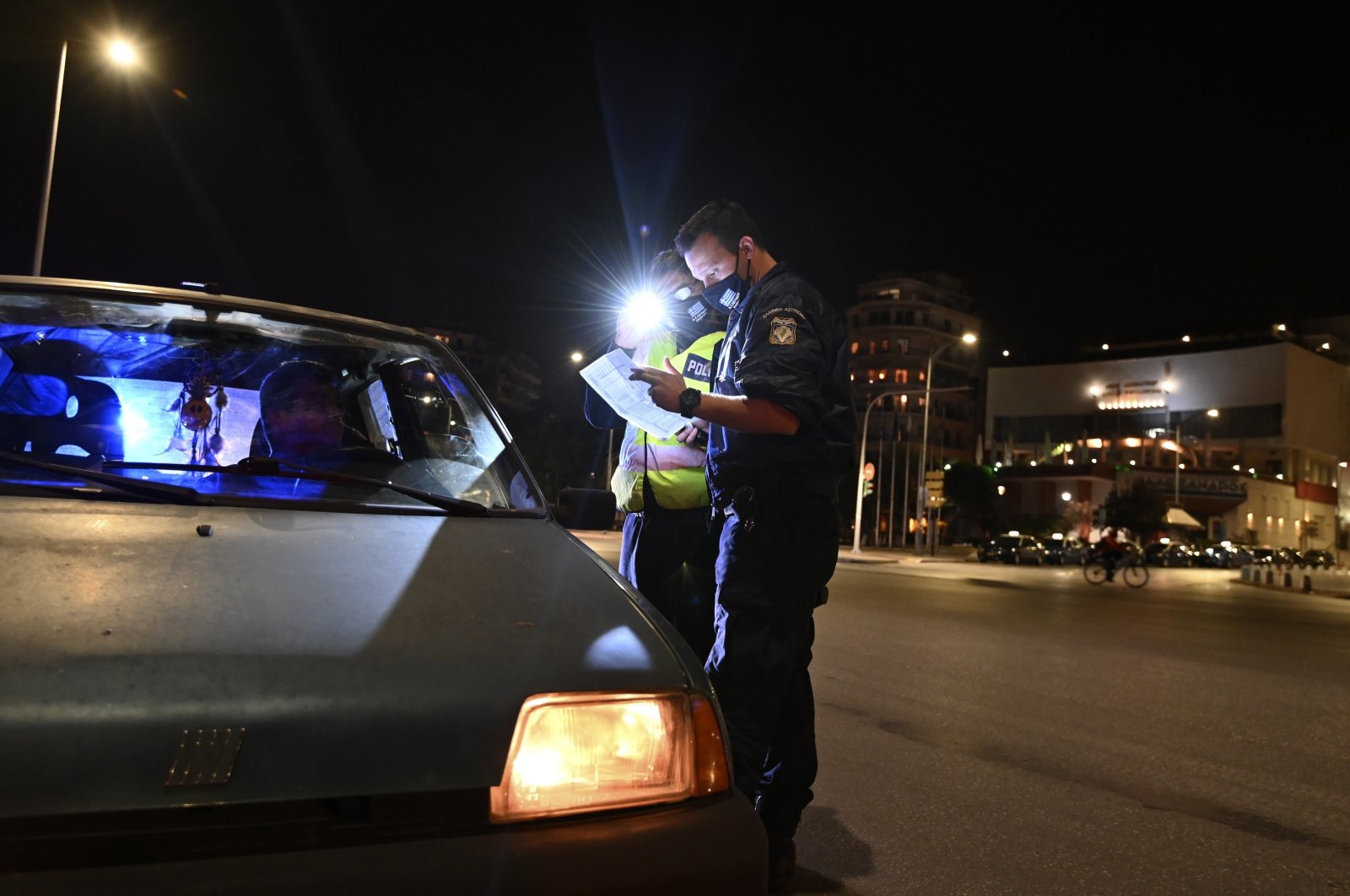 Police check the documents of a driver during the lockdown to contain the spread of COVID-19 in the northern city of Thessaloniki, Greece, Tuesday, Nov. 3, 2020. (AP Photo)
by DAILY SABAH WITH AA Nov 05, 2020 8:51 am
RECOMMENDED

Three Gülenist Terror Group (FETÖ) members were arrested late Wednesday after being caught with fake Greek identity cards in the capital of Athens, while dozens of other FETÖ and PKK suspects were intercepted as they attempted to cross into Italy from a Greek peninsula, according to local Greek media reports.

According to the local Ekathimerini newspaper, the three suspects were discovered during a random stop-and-search encounter with officers of a motorcycle-riding unit.

It said that during questioning at Athens' Security Sub-directorate, the suspects claimed that they fled Turkey because they were being persecuted for being supporters of the U.S.-based cult leader Fetullah Gülen.

Two of the men said they were former government workers, a claim that was confirmed by police.

Meanwhile, the suspects nabbed near the Katakolo Port northwest of the Peloponnese included 20 FETÖ and 10 PKK members.

Some FETÖ members reportedly introduced themselves as "Gülenists" to the Greek authorities and said that they were "former police officers."

Allegedly, there were "former politicians, academics and journalists" among the PKK members.

An investigation has been launched into the incident, it added.

FETÖ and its U.S.-based leader Gülen orchestrated the defeated coup of July 15, 2016, in which 251 people were martyred and nearly 2,200 injured.

Over 8,000 FETÖ members crossed into Greece in the past three-and-a-half years, as Turkey criticizes the country for ignoring Ankara's calls for international cooperation against the terrorist group.

Turkey has repeatedly accused Greece of being a haven for terrorists who committed crimes against the Turks. Athens recently angered Ankara over a string of asylum decisions and the release of terror suspects wanted by Turkey.

Most recently, it released two suspects involved in the 2016 coup attempt. Çetin and Arık were members of an elite underwater offense commando unit of the Turkish military. They fled to Greece in 2017 after Turkey issued arrest warrants for the duo for their involvement in the coup attempt. In line with legal procedures, Çetin and Arık were taken into custody and held in a refugee camp for 18 months, a formal period for detention.

Apart from FETÖ, Greece has been criticized for harboring members of far-left terrorist groups. Last year, Greek courts ordered the release of members of the Revolutionary People's Liberation Party-Front (DHKP-C), which is recognized as a terrorist group by the EU and the U.S.