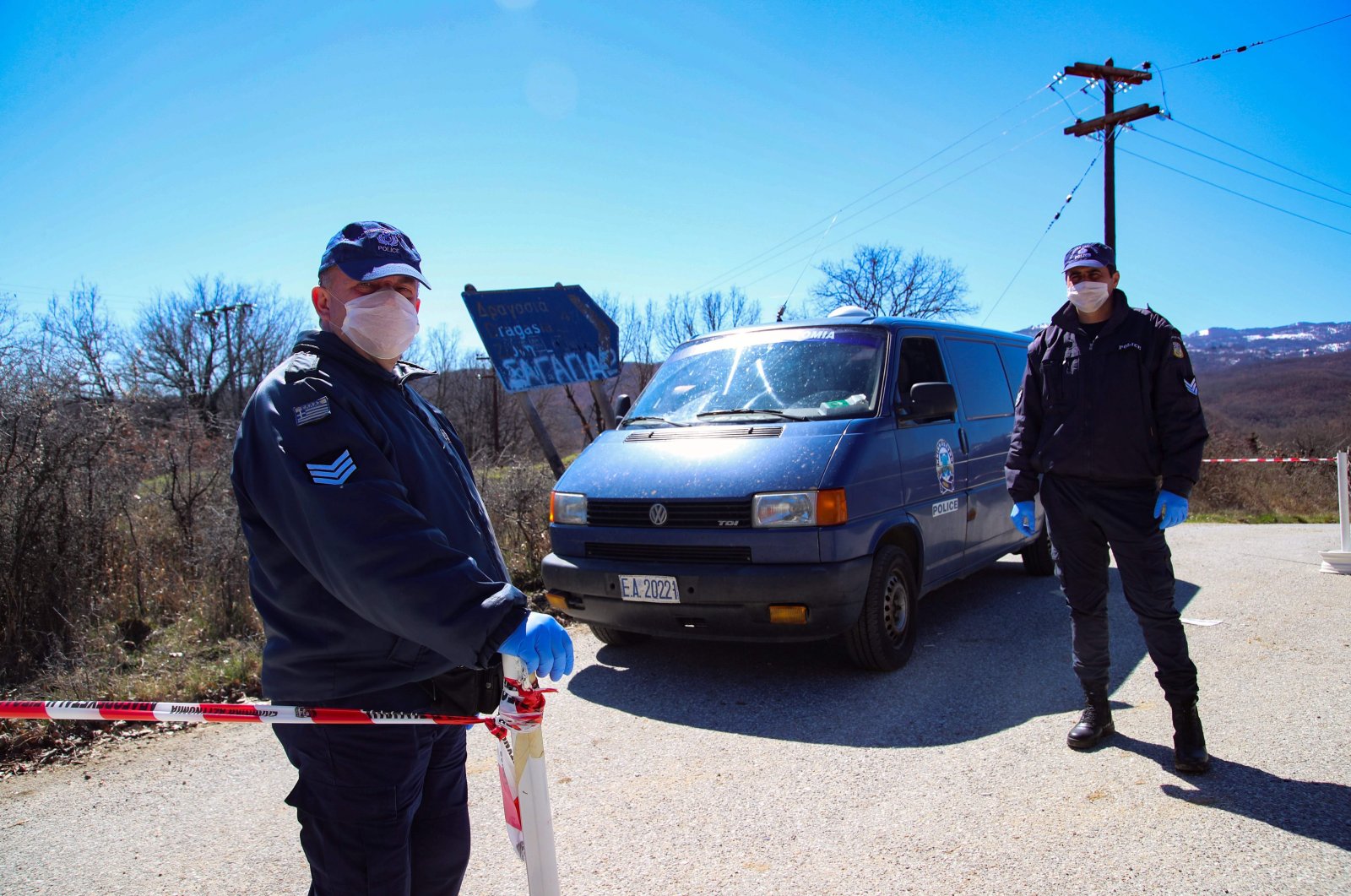 This file photo shows Greek policemen wearing face masks as a protective measure standing guard at a checkpoint on the road to the village of Dragasia near Kozani on Tuesday, March 17, 2020. (AFP Photo)
by daily sabah Mar 19, 2020 5:54 pm
RECOMMENDED

The raids were conducted in the Exarcheia and Sepolia neighborhoods in cooperation with Greek intelligence services, a statement by the police said.

According to the Athens News Agency/Macedonian Press Agency (ANA/MPA), the suspects had participated in various incidents in Turkey.

Surveillance cameras had been installed outside the house.

In the Exarchia flat, police seized mobile phones, laptops, a scanner and other computer hardware.

On Friday, Greek police said 11 suspected members of DHKP-C had been arrested.

A 12th person arrested was sought under an Interpol warrant for alleged links to DHKP-C, the police said.

The DHKP-C, although less influential in Turkey than other terrorist organizations such as the PKK, still represents a considerable threat to the country's security. The group is an offshoot of a Marxist-Leninist movement – Dev Sol (Revolutionary Left) – that was established in the 1970s and claimed responsibility for a series of high-profile murders, including the assassination of nationalist politician Gün Sazak and former Prime Minister Nihat Erim in 1980. The DHKP-C was founded in 1994 and was involved in the assassinations of several intelligence officials and Özdemir Sabancı, a member of the Sabancı family, one of the richest families in Turkey that owns a large conglomerate of companies.

The DHKP-C attempted to stage a bloody comeback in recent years by carrying out attacks against the police. In 2012, about 10 years after its last known lethal attack in Turkey, the DHKP-C conducted a suicide bombing at a police station in Istanbul, killing a policeman. It claimed responsibility for a suicide bombing at the U.S. Embassy in Ankara, which killed a Turkish security guard and injured a journalist in February 2013. This was followed a month later by rocket attacks against the Ministry of Justice in Ankara and the headquarters of the ruling Justice and Development Party (AK Party). In September 2013, the DHKP-C claimed responsibility for a rocket attack against the headquarters of Turkish police in the capital. No casualties were reported in the three attacks.

The DHKP-C was also responsible for the killing of Mehmet Selim Kiraz, a prosecutor who was investigating the possible negligence of police in the death of 15-year-old Berkin Elvan during the Gezi Park riots. Kiraz was killed in his room at an Istanbul courthouse on March 31, 2015, after two militants took him hostage for several hours.

For decades, Greece has served as a safe haven for DHKP-C and other terrorist groups active in Turkey, whose members were granted political asylum. The terror group currently operates a camp disguised as a refugee camp, located in the town of Lavrion, 60 kilometers (37 miles) southeast of Athens. However, in recent years, cooperation between the two countries has increased. In 2014, four Turkish men were arrested in Athens on terrorism-related offenses in connection with the DHKP-C after a raid on an apartment uncovered weapons, explosives and detonators. The operation followed the arrests of five Turks and three Greeks over a speedboat carrying arms that was intercepted in the Aegean Sea.

Nine people had been arrested in Greece in 2017 ahead of a visit by President Recep Tayyip Erdoğan. They were initially charged as DHKP-C members and jailed for months before being released last year after convincing a court that they were political refugees.