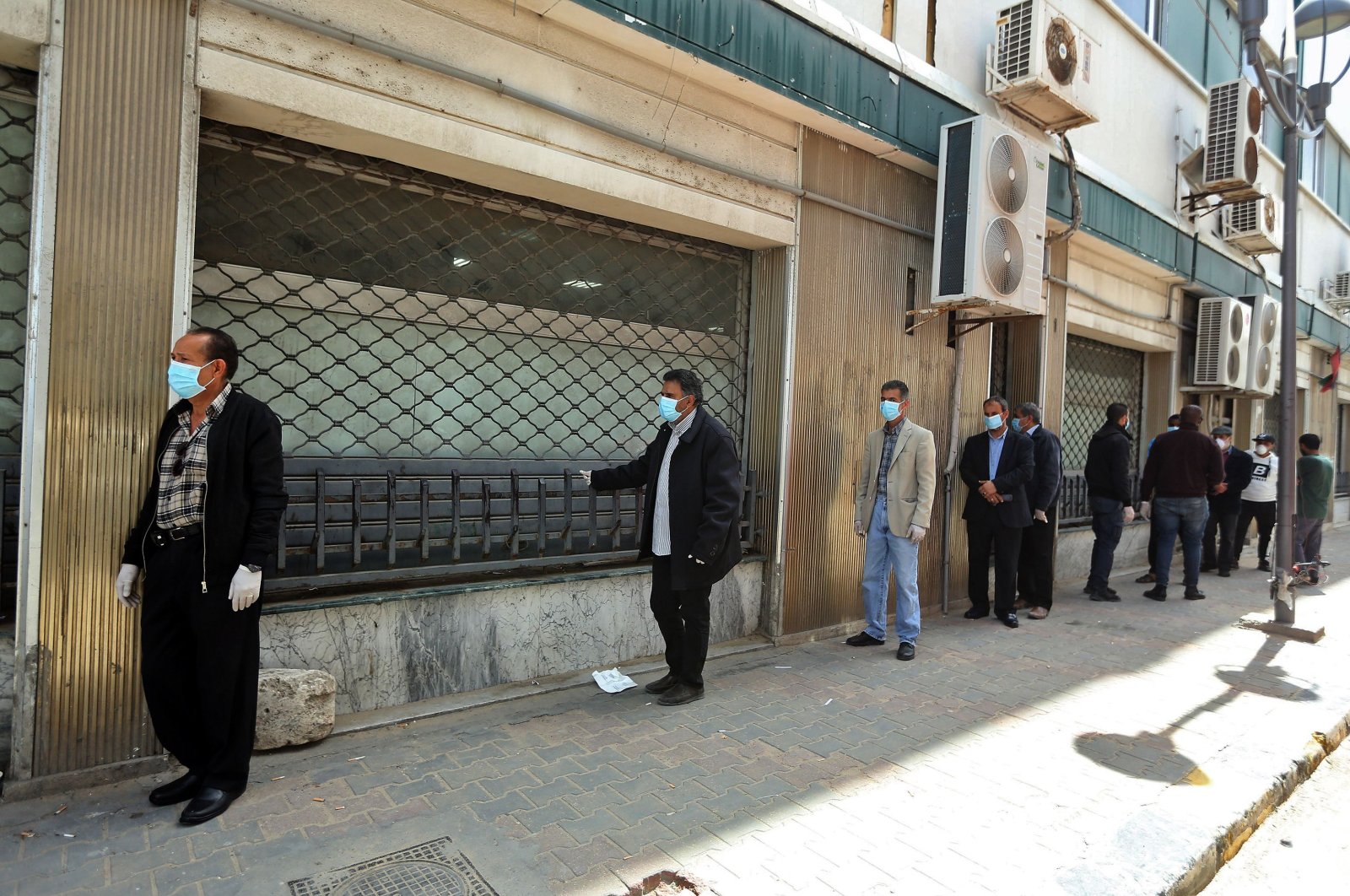 Libyans wearing protective face masks queue in front of a bank in the centre of the capital Tripoli on April 1, 2020, amidst the novel coronavirus pandemic crisis. (AFP Photo)
by Daily Sabah with DPA Apr 05, 2020 12:27 pm
RECOMMENDED

Two civilians were injured when forces loyal to putschist Gen. Khalifa Haftar shelled a hospital in the Libyan capital Tripoli on Saturday, which marked the first anniversary of the start of their assault to capture the city.

A mortar shell struck one of the gates of Tripoli University Hospital, injuring a woman and a security guard, said Amin al-Hashimi, a media official representing the Health Ministry of the U.N.-recognized Government of National Accord (GNA) in a press statement. The statement offered no further details.

On April 4 last year, Haftar, commander of the country's illegitimate rival forces based in the east, ordered his militia to capture Tripoli from the rival GNA. The fighting has since descended into a stalemate.

Fighting has raged in Libya between Haftar's forces and GNA loyalists in recent weeks, despite calls from the U.N. and several countries for a humanitarian truce to focus efforts on battling the coronavirus pandemic.

Health authorities in Libya have reported 16 virus infections, including one death.

The risk posed by the pandemic is particularly worrying in Libya, where the security and humanitarian situation has deteriorated further in light of Haftar's offensive launched against Tripoli last year.

The fighting has killed more than 1,000 people and displaced 150,000. The escalation in the fighting could spell disaster for Libya's already-fragmented and badly-stretched health system in its handling of the coronavirus.

The oil-rich country is currently divided between two administrations: the U.N.-recognized government in Tripoli and another based in the eastern city of Tobruk and allied to Haftar.

Diplomacy has made little headway in stopping the fighting or finding a political solution to the turmoil that has followed the 2011 uprising that ousted long-time dictator Moammar Gadhafi.

A fragile truce came into force on Jan. 12, but fighting has continued with each side blaming the other for violations. On Jan. 19, German Chancellor Angela Merkel and U.N. Secretary-General Guterres co-hosted the Berlin conference, which sought a stronger commitment from world powers and regional actors to noninterference in Libya, genuine support for the cease-fire and adherence to the U.N.'s arms embargo.

Last month, the U.N. envoy to Libya, Ghassan Salame, resigned, citing the damage the stress of the job was doing to his health, as talks in Geneva sputtered and a cease-fire agreed upon in January faltered. He had earlier complained about the violation of an arms embargo, with weapons pouring in for both sides.