'Haftar is a war criminal,' Libyan PM says at UN 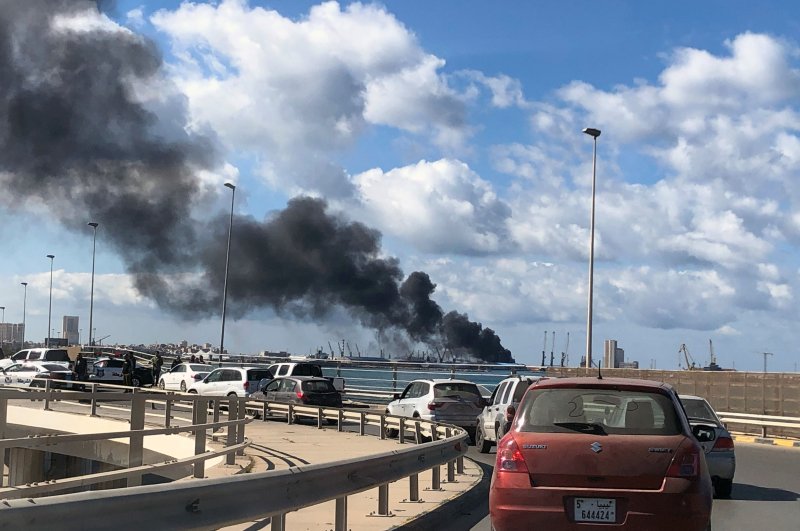 Smoke rises from a port of Tripoli after being attacked by putschist Gen. Khalifa Haftar's forces, Feb. 18, 2020. (REUTERS)
by Daily Sabah with Agencies Feb 24, 2020 2:11 pm
RECOMMENDED

"Children have lost their right to education due to the shelling and the closure of schools because of the attacker and those who fund the attacker and provide weapons; these must be held accountable," Sarraj told the forum.

He said his internationally recognized, legitimate Government of National Accord (GNA) had "always showed its readiness to move forward on the path to peace and stability."

"The entire world has been able to see the escalation in hostilities and attacks against the capital Tripoli since April 4, 2019," said Sarraj.

But despite large numbers of people killed and displaced by the actions of "the war criminal Mr. Haftar", Sarraj lamented: "Until today, we have not seen action by the international community."

"We have repeatedly asked that commissions of inquiry be established to investigate the violations, the forced displacements, the arbitrary detentions, the extrajudicial killings," he added.

The GNA leader's comments came as the U.N. announced that indirect negotiations between military leaders from Libya's warring sides had agreed on a draft ceasefire deal, which will now be discussed by the leadership on both sides.

It was reported that the GNA took a firm position at the peace talks in Switzerland on Monday, demanding that Haftar forces withdraw from the ramparts of the capital.

The internationally recognized government nearly walked out of talks last week aimed at creating a cease-fire in Tripoli, which eastern forces loyal to Haftar have been trying to capture. The government blamed Haftar's forces for shelling Tripoli's port shortly after the talks got underway.

Since being persuaded by a U.N. envoy to stay, the government side has taken a hard line in public, saying there can be no deal while Haftar's forces remain in place.

"Our delegation is insisting that forces of Haftar have to withdraw from where they are now," Foreign Minister Mohamed Syala told journalists.

Syala said he was "astonished" that the international community had not forced Haftar to reopen oil fields that he has shut in recent weeks and end a blockade that has cut off nearly all of Libya's access to funds.

He said one reason could be a desire by big countries to keep oil prices high, "and if that's the reason it is inhumane."

On the other hand, the U.N. Support Mission in Libya (UNSMIL) said it along with the two parties had "prepared a draft cease-fire agreement to facilitate the safe return of civilians to their areas with the implementation of a joint monitoring mechanism."

The process would be facilitated by UNSMIL and a joint military commission with members from both sides.

"The two parties agreed to present the draft agreement to their respective leaderships for further consultations and to meet again next month," the statement said.

The next meeting would be dedicated to drawing up terms of reference for the committee in charge of the implementation of the agreement, it said.

U.N. envoy Ghassan Salame, who was scheduled to meet with Sarraj later on Monday, has said the political discussions would go ahead despite the hostilities on the ground.

But Syala said that the GNA had yet to receive an invitation to attend and that it remained to be seen whether the talks would go ahead as planned.

The announcement came after a second round of indirect military talks in Geneva between Libya's GNA and Haftar's forces.

The talks, mediated by U.N. envoy Ghassan Salame, are aimed at brokering lasting ceasefire to fighting that has left more than 1,000 people dead and displaced some 140,000 since last April, according to the UN.

Several rounds of talks focused on economic issues, including fairer distribution of Libya's oil wealth, have also taken place in Egypt and Tunisia, and talks toward a political solution are scheduled to start in Geneva on Wednesday. However, lawmakers from both sides announced later on Monday that they will not attend political peace talks.

In a recent article, the New York Times took a closer look at Libya’s territories controlled by forces loyal to Haftar. As the New York Times correspondent described, while Haftar has handed control of the mosques to extremist preachers, “he has showered patronage on a tribal death squad called the Avengers of Blood, blamed for a long string of disappearances and killings of his political opponents.”

Haftar’s bad record of human rights led to a warning by the U.N. Secretary-General last month of “deterioration of law and order” in eastern Libya, “including numerous cases of crimes and intimidation.”

Haftar began an offensive in April last year to seize the capital Tripoli from GNA. Pro-Haftar forces also blockaded the main oil terminals in eastern Libya the day before a summit in Berlin on Jan. 19 that called for the end of foreign interference in the conflict and a resumption of the peace process.

The National Oil Corporation said losses from the oil closures have reached more than $1.85 billion as of Thursday. The daily oil production has since the closure fallen to 122,424 barrels a day from about 1.2 million. Libya has the ninth-largest known oil reserves in the world and the biggest oil reserves in Africa.

Despite presenting an image of a secular and Western-oriented leader, Haftar has largely shut Western journalists out of his territory. In a rare visit, the New York Times described the Haftar administration over areas controlled by his forces as “unwieldy authoritarianism that in many ways is both more puritanical and more lawless than Libya was under its last dictator, Moammar Gadhafi.”

While local people in Benghazi complain of corruption and self-enrichment by tribal militia leaders and former Gadhafi officers, unexplained bombings, abductions and detentions without trial were reported. Also, they reported that extremists have taken control over the mosques and religious broadcasting and could be infiltrating the police force. At the end of a four-year-long assault, Haftar forces took control of Benghazi in 2017. Nearly three years passed yet but the streets of Benghazi still resemble a ghost city with ruins and wreckages.

Armed by foreign sponsors, recruiting fighters from local tribes, welcoming the help of former Gadhafi officers, taking the support of some extremist groups, Haftar covers billboards of Benghazi with his own statuesque pictures similar to other dictatorships in modern history.