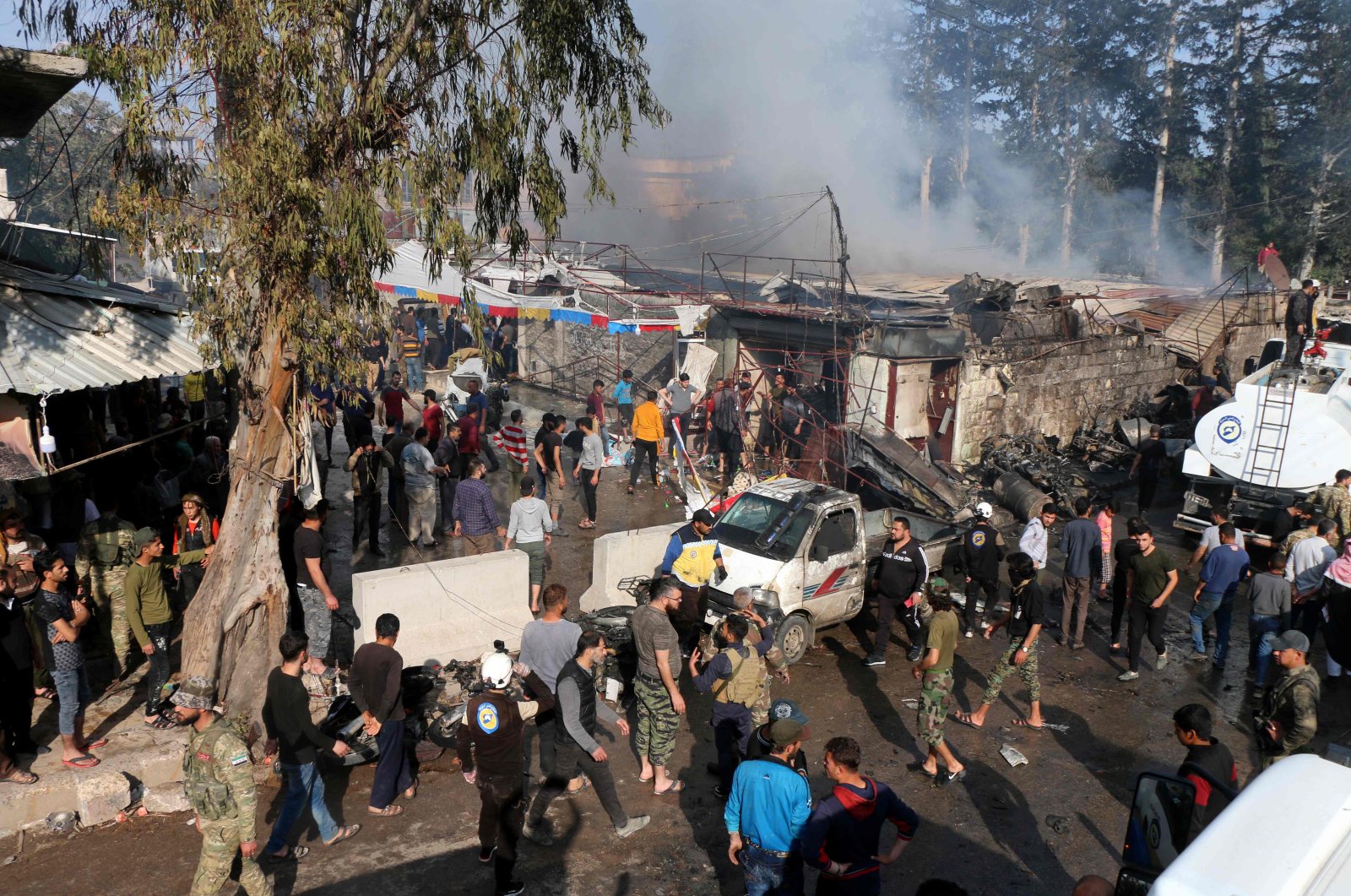 A handout picture released by Syrian Civil Defence rescue workers, also known as White Helmets, shows the scene of a fuel truck bomb that killed at least 40 civilians in the northern Syrian city of Afrin. April 28, 2020. (AFP Photo)
by Daily Sabah with AA
Apr 29, 2020 10:43 am

The international community and Turkish officials strongly condemned a terrorist attack by the YPG/PKK in Afrin, northwestern Syria that killed at least 40 civilians, including 11 children on Tuesday.

"The United States condemns the act of terror carried out today in Afrin, Syria, claiming the lives of dozens of people shopping in the central market as they prepared to break the Ramadan fast. Initial reports indicate many victims were civilians, including children," said State Department spokeswoman Morgan Ortagus in a statement.

Secretary of State Mike Pompeo said on Twitter that the U.S. renews its call for support and implementation of a nationwide cease-fire in Syria after "today's cowardly act of terror carried out on innocent victims in #Afrin."

“Such acts of evil are unacceptable from any side in this conflict,” Pompeo added.

British Minister of State for the Middle East and North Africa James Cleverly said he was “appalled” by the news coming from Syria.

On Tuesday, at least 40 civilians, including 11 children, were killed in the attack in the region of Syria near Turkey’s border, according to Turkey’s Defense Ministry.

At least 47 others were wounded in the blast in the Afrin city center carried out using a bomb-rigged fuel tanker.

“I’m appalled at reports that dozens of civilians were killed today by a bomb set off in a marketplace in Afrin, Syria,” Cleverly wrote on Twitter.

Many buildings were damaged on Raju Street where the fuel tanker exploded, and medical personnel took the wounded to hospitals in the center of Afrin.

“The UK calls on all parties to heed @UN Envoy @GeirOPedersen’s call for a nationwide ceasefire. Syrians have suffered so much already,” he added.

“After nine years of crisis, civilians living in Syria have already endured suffering and deprivation for far too long,” they said, expressing their condolences to the families of the victims and those affected by the attack.

Riza and Kennedy also emphasized the obligation upon all parties under international humanitarian law to ensure the safety of civilians and civilian infrastructure.

Activist collectives in northern Syria urged people in the Afrin area to head to hospitals and donate blood. The Syrian Observatory of Human Rights and other activists said the death toll could rise further as some of the wounded were in critical condition.

Turkish officials also decried the terrorist attack by the YPG/PKK in northwestern Syria.

Turkish Vice President Fuat Oktay said on Twitter: “I condemn the heinous terrorist attack on this holy day of Ramadan. I wish Allah’s mercy upon the martyrs and a quick recovery for those wounded. Innocent civilians’ and children’s blood is on the hands of those who support, remain silent in the face of actions of this terrorist organization.”

“Heinous terrorist organisation PKK/YPG, slaughtered innocent civilians, including children even on this holy day of Ramadan,” Mevlüt Çavuşoğlu wrote on Twitter. “Wish Allah’s mercy upon the deceased. Those who support the terrorists and trying to take it off the terror list are also responsible for this cowardly attack,” Çavuşoğlu added.

Interior Minister Süleyman Soylu said the treacherous terrorist organization will not get away with the attack carried out in Afrin during Ramadan.

The terrorist was nabbed in the southern province, which is located near the border with Syria.

The statement released by the governor’s office noted that people injured in the attack have been receiving treatment at hospitals in Hatay and Afrin.

In January 2018, Turkey launched a major military operation, Operation Olive Branch, to rid Afrin of YPG/PKK terrorist elements and liberated the city and province that March.

Operation Euphrates Shield (2016) and Operation Peace Spring (2019) were other two anti-terror cross-border operations Turkey carried out across its southern border with Syria to prevent the formation of a terror corridor and enable the peaceful settlement of locals.

In its more than 35-year terror campaign against Turkey, the PKK, listed as a terrorist organization by Turkey, the U.S. and the European Union, has been responsible for the deaths of 40,000 people, including women, children and infants. The YPG is the PKK’s Syrian offshoot.