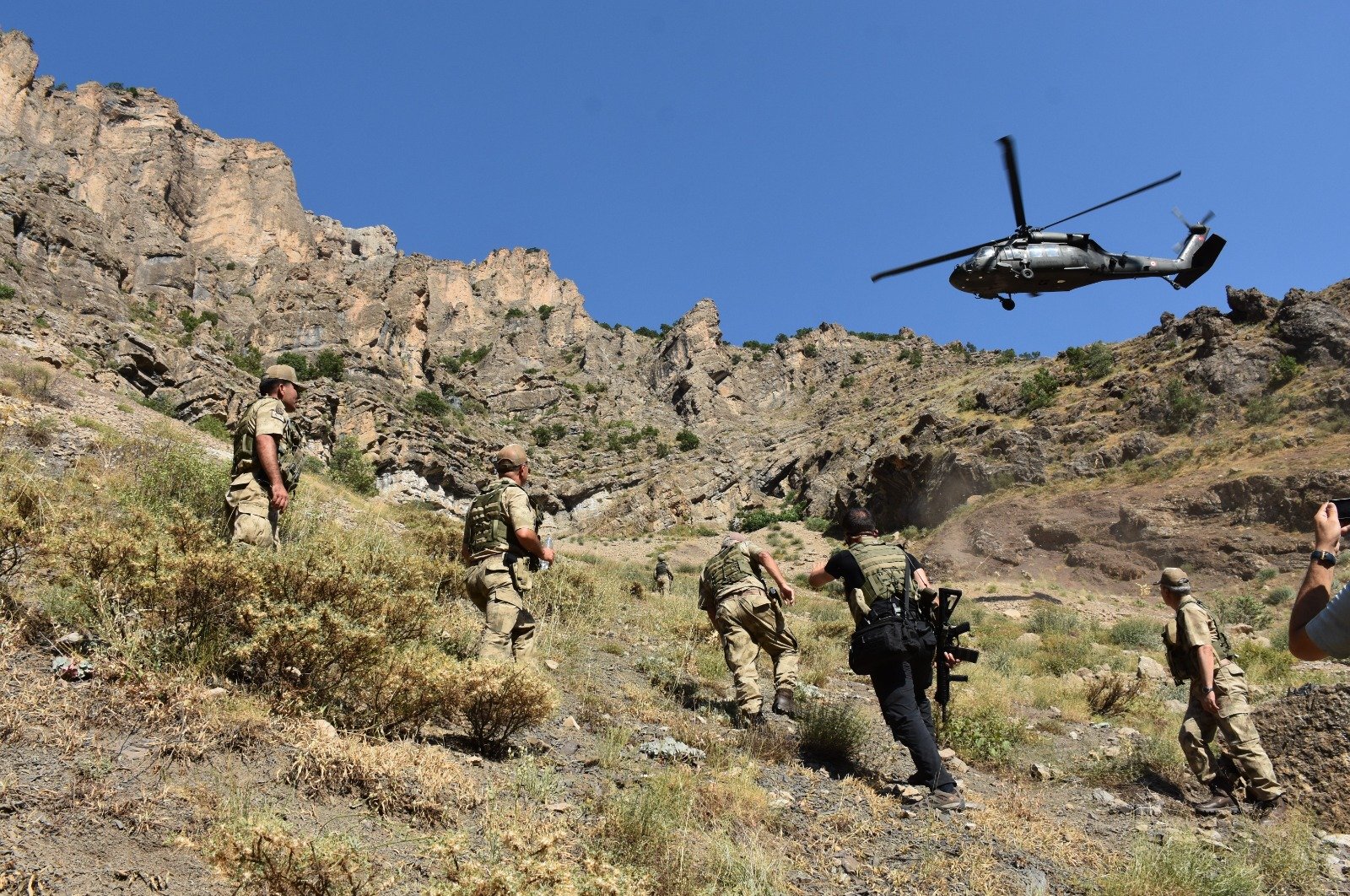 Three PKK terrorists were killed Monday as Turkey launched a new counterterrorism operation in the southeastern province of Hakkari, the Interior Ministry confirmed.

The operation has been named "Lightning-Cilo 2," after Hakkari's Mount Cilo. The terrorists were killed in an air-supported operation, the ministry said.

Previously, Turkey had launched Operations Kıran and Kapan, which successfully have brought the number of PKK terrorists down to just 492 from around 3,000 in 2016.

In August 2019, Turkey launched Operation Kıran against the YPG/PKK terrorists in the country's southeast provinces of Van, Hakkari and Şırnak.

It was followed by Operation Kıran-2, launched later in the same month in the provinces of Mardin, Şırnak and Batman. Eight more iterations followed, including Kıran-9 and Kıran-10.

The security forces have adopted strategies like "ending terrorism at its root" and "attack rather than defense" in its operations across the country.

To that end, Turkey has engaged in efforts to convince terrorist organization members to surrender, working together with their families.

A significant number of suspected terrorists have already deserted the PKK and surrendered. At least 100 terrorists have been persuaded to surrender by the Turkish authorities since the beginning of this year and the efforts continue. However, many terrorists are still fearful of leaving the group because they face severe punishment if caught.

In its more than 40-year terror campaign against Turkey, the PKK – listed as a terrorist organization by Turkey, the U.S. and European Union – has been responsible for the deaths of 40,000 people, including women and children. The YPG is the PKK's Syrian offshoot.

Once notoriously associated with terrorism, thanks to these operations, Turkey's southeastern province of Hakkari now enjoys peace and serenity – something that has been reflected in the region's daily life.

For instance, in the province's Çukurca district, locals have returned to their hometowns after 25 years following the elimination of terrorist elements and have started to once again engage in agricultural activities.

Enjoying the peaceful environment today, the neighborhoods of Dutluca and Bey had to be evacuated in 1995 due to the terrorist threat.

The mayor of the district Ensar said on July 16 that they provided the neighborhoods with agricultural irrigation equipment after receiving requests from the locals.

"Now, our farmers can freely produce products such as rice plant and sesame," he said.

One of the locals who returned, Adalet Yılmaz, on the other hand, expressed that they cooperate for agriculture and are happy to use their fields years after being forced to leave.

"We demand our houses be reconstructed as well," she said, emphasizing their happiness to return home.

Similarly, in the province's Yüksekova district, since peace has been established thanks to successful operations, state units have been able to provide the locals with services once again.

As an example, in order to provide more transportation opportunities, the district's municipality has started to build a new road in its town of Çamdalı.

"We have been waiting for a road for years," said one of the locals, Husret Şen, adding that they are grateful to have been saved from terrorism after 30 years.

Besides, thanks to the awareness campaigns the number of animals recorded has drastically increased, especially in the mountains.

Wildlife has started to descend into suburban areas thanks to the lack of weapons and explosions that once plagued the area. There has been a particular increase in the number of mountain goats, bringing joy to Hakkari’s animal lovers.

Gendarmerie and police forces as well as teams from the General Directorate of Nature Conservation and National Parks have carried out projects to ensure the survival and protection of the wild animals.

The projects are supported by Hakkari University and a number of nongovernmental organizations (NGOs) whose teams visited to inform locals about the protection of nature and wildlife.