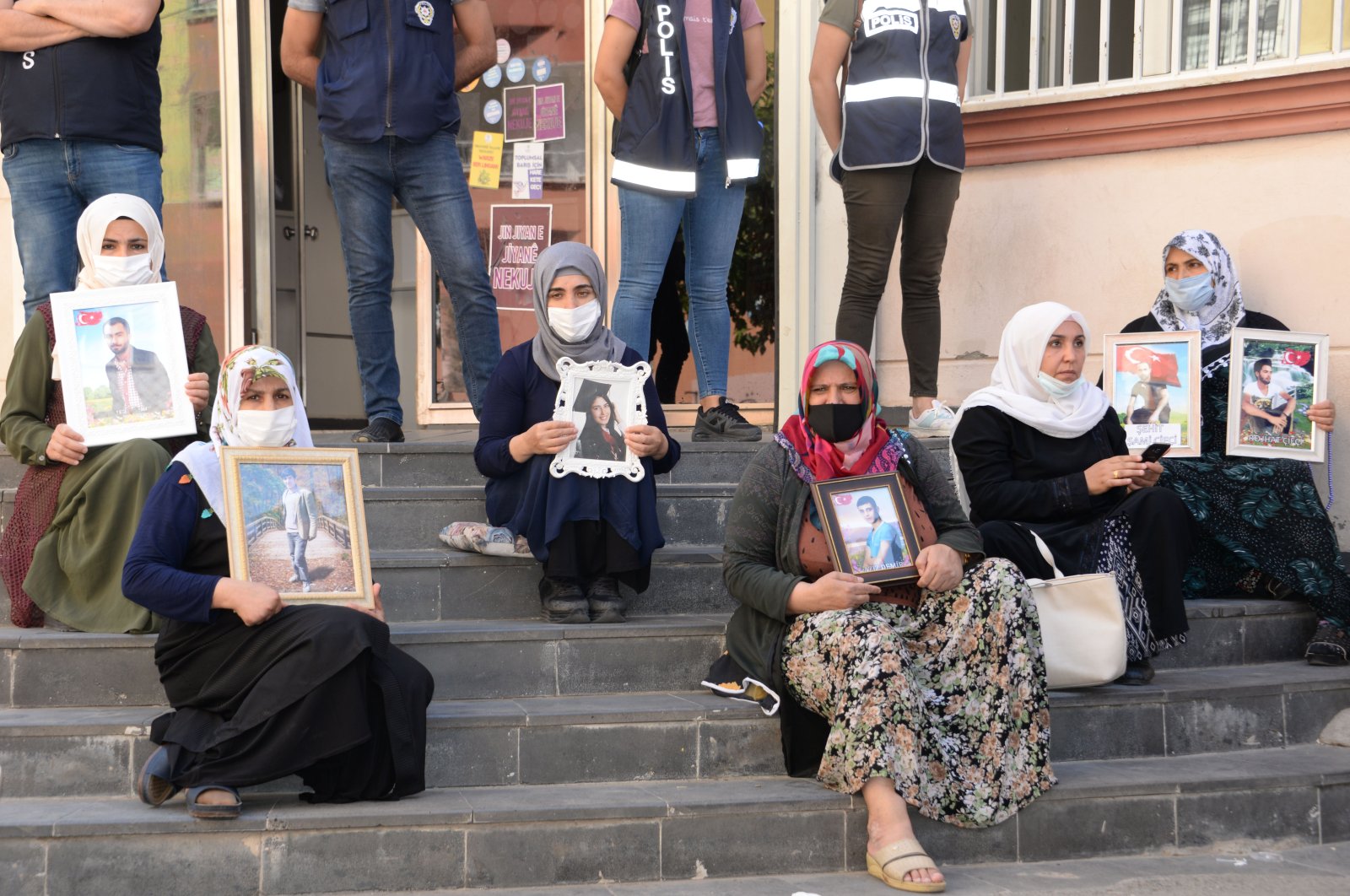 143 Kurdish families have been staging a sit-in protest in front of the HDP headquarters in Diyarbakır province with the demand of their children back from the PKK terrorists for a year now, Aug.31, 2020. (DHA)
by DAILY SABAH WITH AA Aug 31, 2020 12:54 pm
RECOMMENDED

Kurdish families continue to demand the return of their children kidnapped by the PKK, not only in the southeastern province of Diyarbakır but also from their hometowns where some have returned due to the coronavirus pandemic.

"Some of the protesting families reunited with their children. I demand the same for myself," said Fikriye Kılıç, a mother who once joined the protests in front of the People's Democratic Party (HDP) headquarters in Diyarbakır but now protests in her hometown in southeastern Şanlıurfa province's Bozova district due to the coronavirus.

Continuing her protest from Bozova along with her husband, Kılıç is demanding her son Hasan, who was kidnapped when he was a university student about three years ago, back from the PKK terrorist group.

"The decision (to protest) that the families have taken is the right decision. I would like all families to participate in it. Mothers can achieve anything. We can be successful if we act together. Let us stop the crying of the mothers," Kılıç said, noting that the loss of a child is an incomparable sorrow.

Hacire Akar claimed her son was kidnapped and taken to the mountains on Aug. 22, 2019. She then started a sit-in protest in front of the HDP headquarters in Diyarbakir. After she was reunited with her son as a result of her sit-in, other mothers began to see the hope of their own reunions with their children. Subsequent sit-in protests began Sept. 3, 2019, and more parents increasingly joined the demonstrations. Families from many Turkish provinces come together to share the pain of being separated from their children. Thanks to the protests, 15 families have been reunited with their children, while others still wait longingly to embrace their children again.

Blaming the HDP for her son's abduction, Kılıç said that her son had previously been studying theology and had many dreams that were crushed by the PKK.

"My son was very successful. He managed to enter the university without attending any private teaching institutions, by merely studying under the blanket on cold winter nights," she said.

She called on her son to return to their home.

"It's been almost three years now. Come back, please; we cannot take it anymore," the mother said.

The father Zeynel Abidin Kılıç, on the other hand, recounted the first time they realized that their son was kidnapped. Each time he tells the story, he relives the painful experience.

He said that three years ago, they were waiting for their son to return home for the winter break as always. However, this time, he did not come back. After a search, they learned that he was kidnapped by the PKK.

"My son, if you hear our voice, come back. Don't think that your father will refuse you. A father cannot refuse his child. Come back and surrender to the state," the father said.

Thanks to the pressure from those mothers, terrorists have been surrendering to Turkish justice officials, which has led to happy reunions with families.

"I've been dead for six years. I have four children, I'm trying to stand still just for them. If I had no children, I might have harmed myself," said Fatma Bingöl, another mother who is participating in the protests in Diyarbakır for her son Tuncay, who was kidnapped in 2014 when he was only 14.

"Tuncay," Bingöl said, addressing her son, "do not believe them (PKK). They use you against the state. Do not let yourself be killed. Hold onto your state," the mother said, begging him to return to her.

Remembering that her son once dreamt of becoming a policeman, Bingöl said that this protest has rekindled hope for the family.

"When my child was first kidnapped, I decided to launch a protest in front of the HDP headquarters in (Istanbul's) Arnavutköy district. However, they told me that if I do such a thing, my child would be killed, so I stopped," she said, adding that Akar's protest empowered her to stand up for her own son.

Tuncay's father Şevket Bingöl, who joined the protests alongside his wife, on the other hand, said they expect an explanation from the HDP on why their children were kidnapped.

"We tell them that they have kidnapped our children. Their response is nothing. We have been sitting in front of their doors for almost a year now. Why do they not make any statements? We only want our children back, nothing more," he said.

"The PKK harms Kurdish people's products and lives. They torture the Kurds. They left no peace among Kurds," he said.