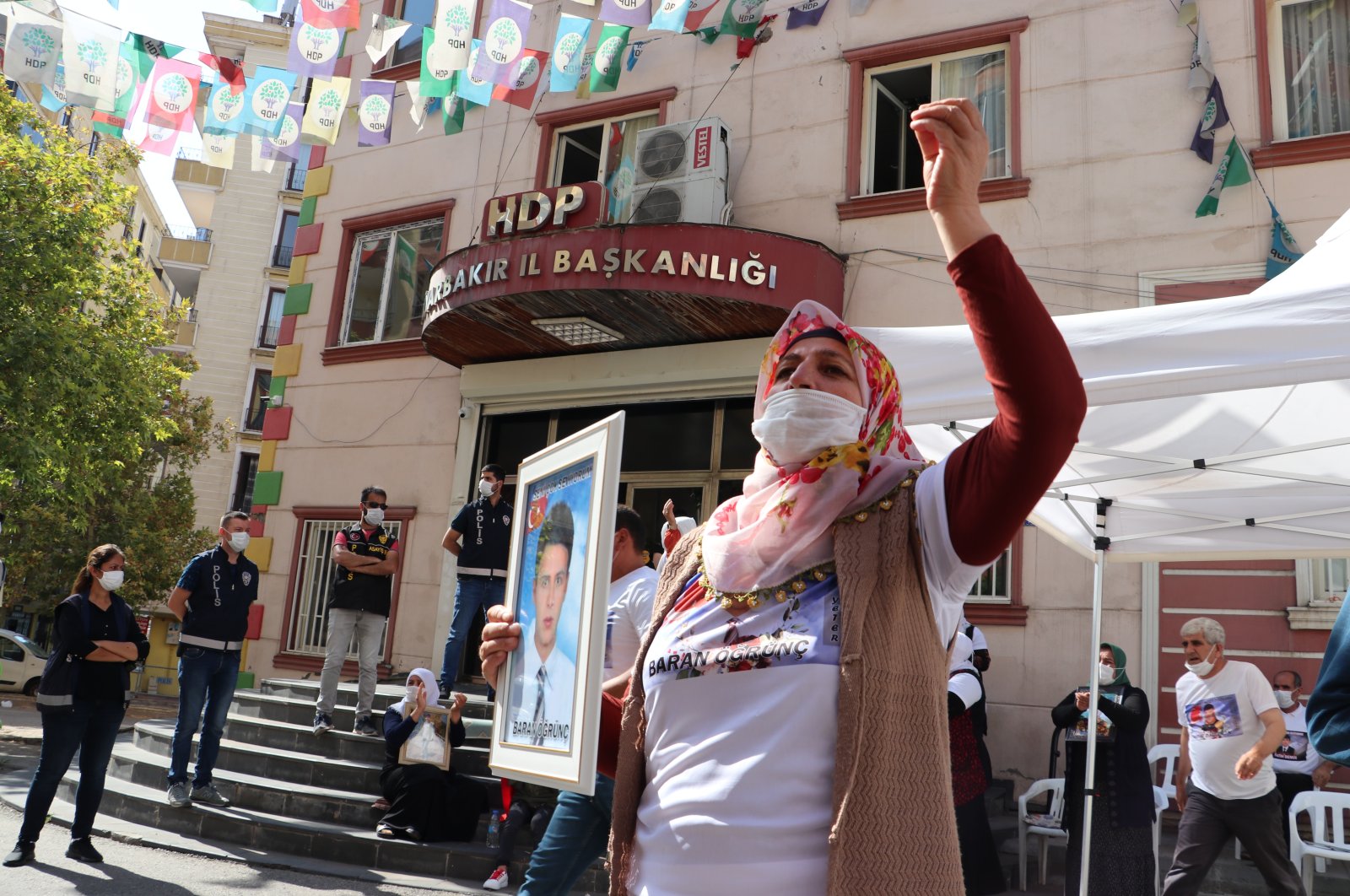 One of the mothers whose son was abducted and forcibly recruited by the PKK protests in front of the HDP headquarters in Diyarbakır, southeastern Turkey, Sept. 3, 2020. (AA Photo)
by Anadolu Agency Sep 03, 2020 12:11 pm

Grieving families, whose children and relatives have been abducted and forcibly recruited by the PKK terrorist group, are marking the first anniversary of their protest in a bid to reunite with their loved ones. They refuse to give up in their struggle and continue their protest in front of the HDP headquarters in Diyarbakır

A group of aggrieved families in southeastern Turkey marked the first anniversary of a sit-in protest against the YPG/PKK terror group Thursday.

Hacire Akar, who claimed her son was kidnapped and brought to the mountains by the PKK and its Syrian wing YPG, started a sit-in protest in front of the Diyarbakır headquarters of the pro-PKK Peoples' Democratic Party (HDP) on Aug. 22, 2019. After she was reunited with her child on Aug. 24 as a result of her determined struggle, other mothers began to gain hope.

Taking Akar's struggle as an example, three more mothers – Fevziye Çetinkaya, Ayşegül Biçer and Remziye Akkoyun – started a fresh sit-in in front the HDP building on Sept. 3, 2019, and the protest it has been growing day by day since then. The number of families coming from all over the country to protest the pain of being separated from their children reached 150.

The families continued their protest during the scorching-hot summer and cold winter. From the beginning, the mothers took turns protesting with their husbands of the HDP headquarters. While the mothers were protesting, their husbands nurtured their children at home. Some mothers continued the demonstrations with their children under difficult conditions, sometimes sleeping on the sidewalk or fainting from exhaustion.

The families have not given up their protests even amid the coronavirus pandemic which has affected the whole world.

Members of the HDP, who did not want to deal with the pain of the mothers, temporarily shut down the Diyarbakır headquarters and decided to carry out the party's activities at its district branch for some time.

The terrorist organization tried every way to discourage families from their sit-in protest. Protesting mothers were insulted by some party members and were also subjected to threats while going home or visiting markets.

Protests go beyond the limits

The appeal of the sit-in by families in Turkey to all mothers whose children were kidnapped by the terrorist organization also received a response from Germany's capital Berlin. Maide T., a German-Turkish mother living in Berlin whose child Nilüfer T. was kidnapped by the PKK terror group on Nov. 12, 2019, started staging a protest in front of an association known to be affiliated with the terror group on Feb. 29. She then continued her protest in front of Chancellor Angela Merkel's office in Berlin due to the insensitivity of the German authorities.

On July 25, protesting mothers in Turkey met with Maide T. via videoconference. Mothers and fathers from Turkey conveyed their support to Maide T, who is struggling alone in Germany. A photo of Nilüfer T. was placed next to those of other kidnapped children in a tent in Diyarbakır.

Security forces dealt a huge blow to the PKK terrorist organization with successful operations in Turkey and abroad. In addition, the security forces use persuasive techniques to save kidnapped and deceived children from the PKK.

Children who are deceived by the PKK regret their decision after seeing their family members taking part in sit-in protests and try to escape from the organization. In collaboration with the families, security forces have convinced 719 members of the organization to lay down their arms in four years.

The number of terrorists who surrendered to security forces has risen to 146 since Jan. 1.

Support for sit-in protest came from all segments of society

Protesting mothers whose only desire was to reunite with their kidnapped children made their voices heard across Turkey. Turkey's first lady Emine Erdoğan also visited the grieving mothers, to whom President Recep Tayyip Erdoğan expresses his support at every opportunity.

In addition to ambassadors and politicians, thousands of people from all walks of life including artists, journalists, writers, sportsmen, representatives of nongovernmental organizations (NGOs), opinion leaders, clergymen, relatives of fallen security officers, veterans, tradesmen, teachers and expatriates have paid visits.

Numerous artists, journalists, writers and television hosts met with the families, listened to what they have been going through and conveyed their support.

Ambassadors from foreign missions in Turkey paid visits to protesting mothers and fathers seeking the return of their children abducted by the YPG/PKK terrorist group.

In addition, Turkish expats from Germany, France, Belgium, Holland, Switzerland and Austria visited the grieving families to show their support.

Members of the Sub-Commission on the Rights of the Convicted and Arrested of Turkey's Grand National Assembly (TBMM), the head of Turkey's Press Bulletin Authority, Rıdvan Duran, and the head of the Board of Ethics for Civil Servants, Köksal Toptan, also visited the families and showed support.

Zekiye Bozdağ, one of the first protesters who initiated the sit-in, said she started the protest with her family members for her brother Süleyman, who was deceived and kidnapped by the PKK on Aug. 30, 2019.

"We all left our children behind us to come here," she said.

"We will continue our protest resolutely until there is not a single child left on the mountain. We want our children from the HDP, dead or alive."

Bozdağ stressed that her mother Fevziye Çetinkaya laments for her child every day at home.

"I hope all deceived children will reunite with their families. I hope my brother Süleyman surrenders to justice as well. Even during the coldest days, we come and continue the sit-in protest.

"Of course, we experienced difficulties. We were coming and protesting with our children even on the days we were sick. Nothing was more difficult than the grief over my brothers' absence," she added.

'I want my son back'

Ayşegül Biçer, one of the mothers who initiated the sit-in for her 17-year-old abducted son Mustafa, said she has been fighting for her son for two years.

Stating that they had left a year behind in the sit-in protest, Biçer said: "Enough is enough. I've got two daughters. This struggle should continue not to sacrifice my two daughters to them as well. We are not scared and we are not going to obey them."

Biçer said she is Kurdish and the state provides her every right. She added that the "PKK should take its dirty hands off their children."

"I rightfully want my son back, to whom I gave birth. This struggle will not end until I take my child from them. I devoted my life to this struggle. I will get my son back from them. Fifteen families reunited with their children in a year. We are hoping to reunite with our children as well.

"We are here until no son is left behind. We were very happy when they reunited with their children. We burst into tears. May all parents experience this joy. I hope this PKK disease is wiped from the face of the Earth."