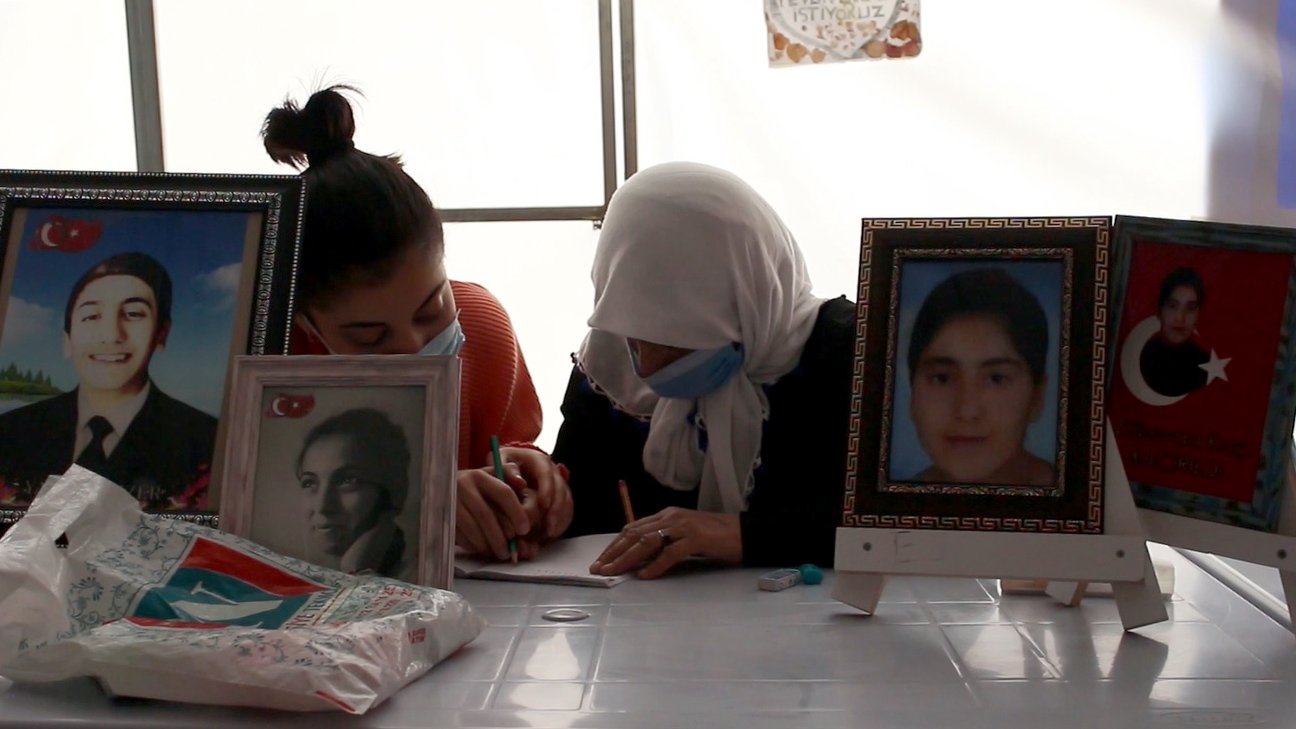 Esmer Koç, a 56-year-old mother, is taking classes from Aysun Adıyaman, who has been waiting for her brother Hamza to return from the PKK for the past four years, Diyarbakır, southeastern Turkey, Dec. 16, 2020. (AA Photo)
by DAILY SABAH WITH AA Dec 16, 2020 5:19 pm
RECOMMENDED

A mother is learning how to read and write during the ongoing sit-in protest against the PKK terror group in Turkey's southeastern Diyarbakır province.

The protest began on Sept. 3, 2019, in Diyarbakır, when three mothers said their children had been forcibly recruited by PKK terrorists.

The sit-in outside the office of the pro-PKK Peoples' Democratic Party (HDP) has been growing every day.

Esmer Koç, a 56-year-old mother, has been taking reading classes from Aysun Adıyaman, who has been waiting for her brother Hamza's return from the PKK for the past four years.

In addition to their resolute struggles, families are an example of solidarity during their sit-in protests. Some mothers knit while they dream of the day they will be reunited with their children, some recite the Quran and others read books.

Koç stated that she has been waiting for her daughter for years now.

The protest started when Hacire Akar turned up on the doorstep of the HDP’s Diyarbakır office one night. A week later, families inspired by Akar transformed her solo stance into a collective sit-in protest. Akar’s son Mehmet returned home on Aug. 24, 2019, giving hope to other families. Since then, the number of protesting mothers has grown as they demand the return of their children who, they say, were deceived or kidnapped by the PKK terrorist group.

Koç said they are fighting decisively with other mothers and will continue their actions for their children until the end.

Koç said she was illiterate and with Adıyaman's help, she started to learn how to read and write, adding that she did not have the opportunity before and she is grateful for it now.

"Hopefully, my daughter will come and start school, and throw away the dirty gun and surrender to the Turkish soldiers," she said.

She further stressed that her daughter was dragged away from school by terrorists and that once her daughter surrenders, she will take her back to school.

Adıyaman said she has been waiting for her brother Hamza for four years since he was kidnapped at the age of 9.

She said the threatened mothers and fathers would no longer remain silent against the HDP and its supporters.

"I saw that Aunty Esmer was trying somehow and wanted to learn. I wanted to help. She is very enthusiastic and willing. I hope she learns how to read and write," she said.