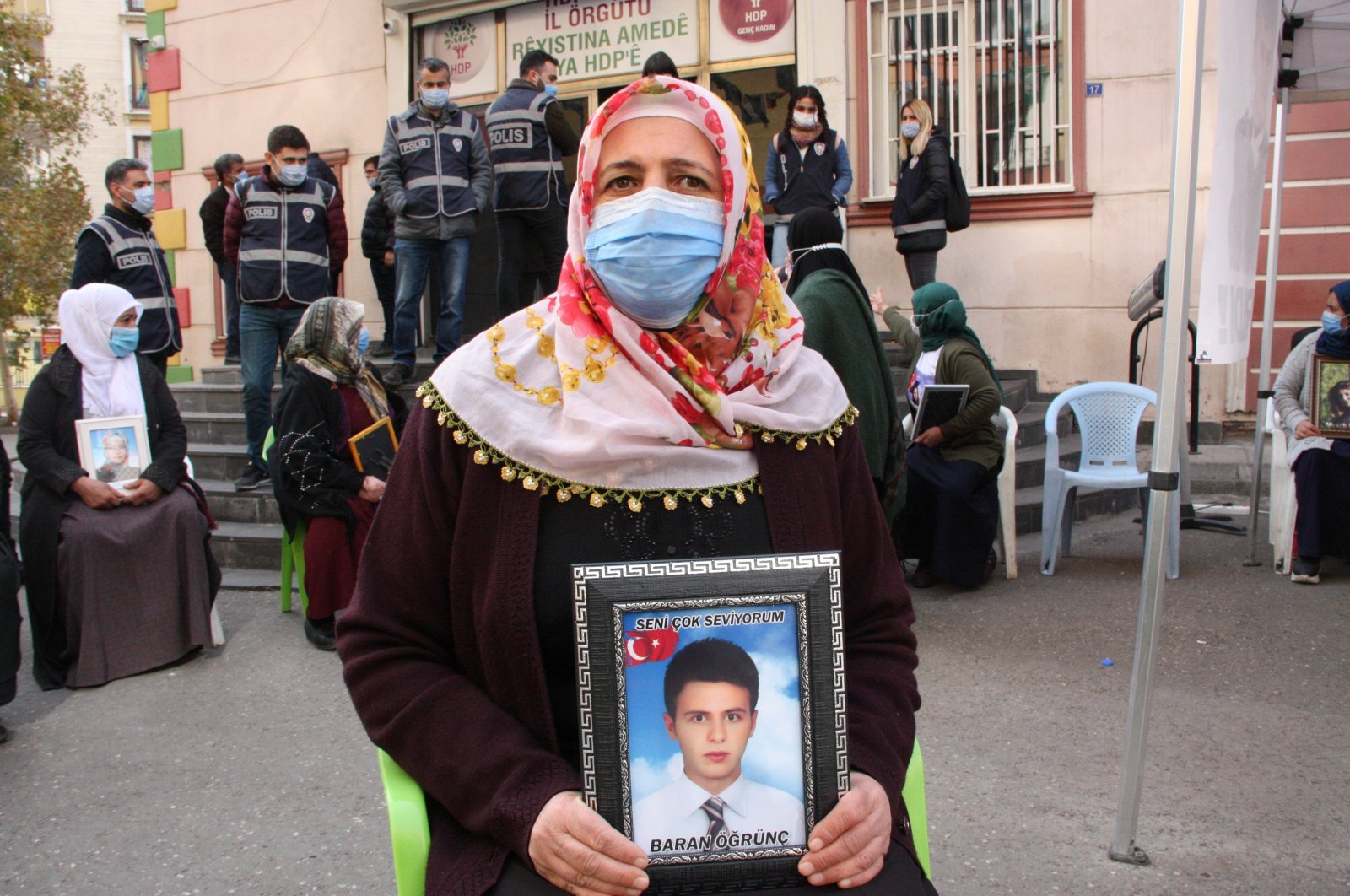 Mother Solmaz Öğrünç poses with a photo of her son Baran, who was abducted by the PKK in 2015 in front of HDP headquarters in Turkey's Diyarbakır province on Dec. 1, 2020 (IHA File Photo)
by DAILY SABAH WITH AA Mar 06, 2021 9:54 pm
RECOMMENDED

Solmaz Öğrünç, one of the mothers protesting in front of the pro-PKK Peoples’ Democratic Party (HDP) headquarters in southeastern Turkey’s Diyarbakır province, has embraced her son’s clothes to ease her pain, as she called on the party to facilitate her son’s return.

Öğrünç’s son, Baran, was only 15 when he was forcefully recruited to join the terrorist group in 2015 and she has been yearning to see him since then.

The grieving mother has scoured the country, as well as northern Iraq, where the PKK is known to be active, to no avail. Many years have passed but Öğrünç’s grief and pain remain fresh, which encouraged her to join the monthslong sit-in protest.

“I’ve been here for one-and-a-half years. I’m here for my [son] Baran. As long as I breathe, I’m not leaving this tent without getting Baran back,” Öğrünç said, as she accused the HDP of assisting the PKK to abduct her son.

Emphasizing that she will never bow down to the terrorists, Öğrünç said the PKK are “child killers.”

“Come back, my son, don’t believe them; they have no religion, belief, or conscience. Come, take shelter in my [Turkish] soldiers, there’s no punishment. They’re tricking you, they brainwashed you, don’t believe them [...] These are people who murder children in the cradle,” she said.

She stressed that their family is quite terrified about her son’s abduction adding that her husband has become seriously ill.

Being unaware of her son’s fate has pained Solmaz to her core, though she still finds solace in the success stories of the ongoing protest. So far, 24 former members of the PKK have voluntarily surrendered to security forces and laid down their weapons. Mother Solmaz wakes up every day hoping that it will be the one in which she gets her son back.

The PKK is recognized as a terrorist organization by Turkey, the U.S. and the EU, and has been responsible for the deaths of 40,000 people since it was founded.