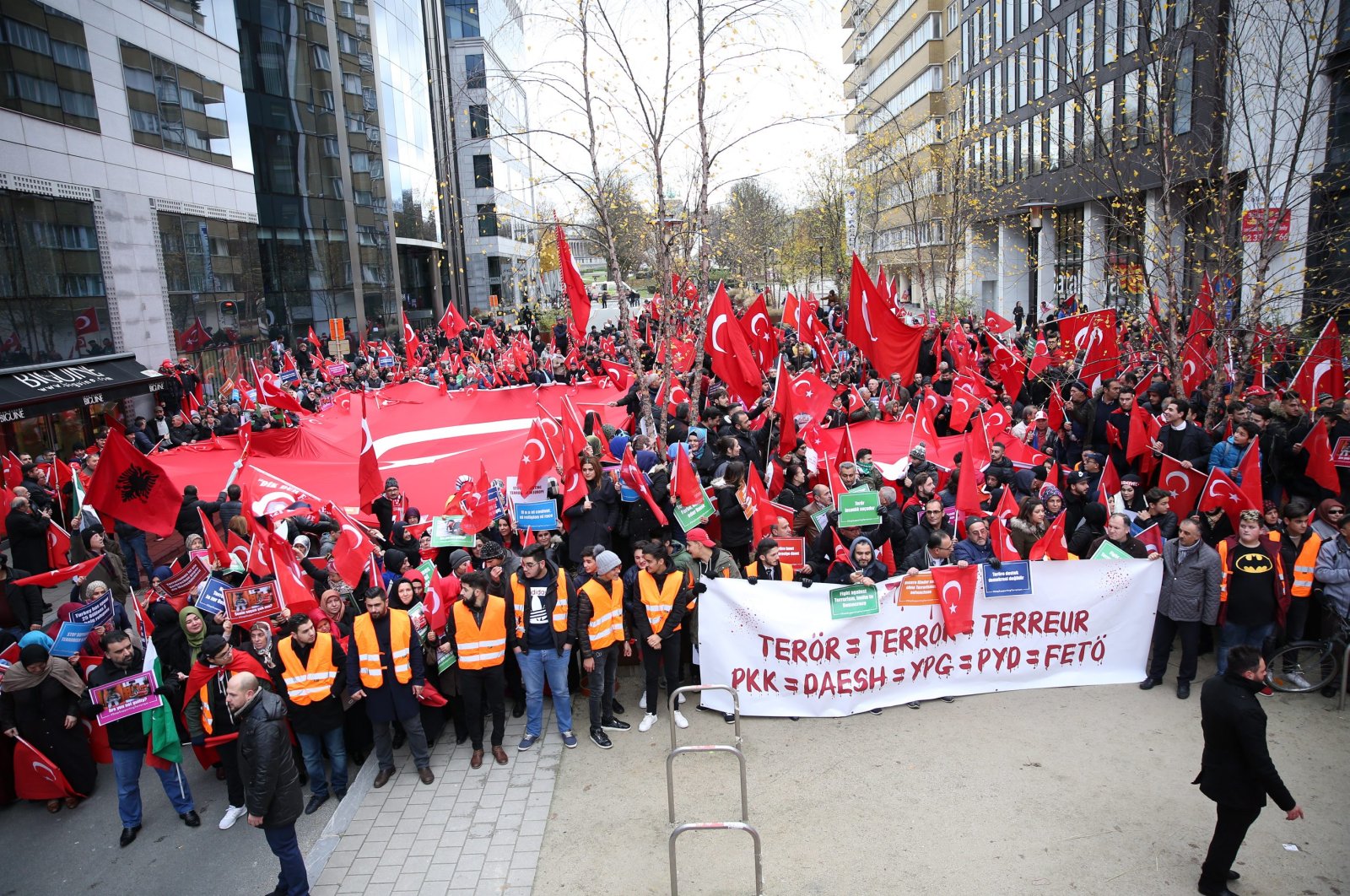 The PKK terror group continues using the European Union's territory for propaganda, recruitment, fundraising and logistical support activities, according to a report by the EU's law enforcement agency released Tuesday.

"The main source of revenue appeared to be the annual fundraising campaign and cultural events. Legitimate businesses were also used. For example, law enforcement in Germany shut down two companies suspected of being part of PKK organizational and financial structures across Europe," it added.

Several European countries informed Europol that the group was also involved in serious and organized criminal activities, according to the report.

Romania reported that in 2019 the PKK “continued to be active in the collection of funds through their annual fundraising campaign.”

Also touching upon legal cases against the PKK, the report said that courts in Austria, Belgium, France, Germany, Hungary and Italy also heard cases of alleged offenses linked to separatist terrorist organizations. “In Hungary, a male and a female defendant were tried for supporting the PKK by providing logistical assistance, supplies and deliveries. Both defendants were sentenced to two years imprisonment and expulsion from Hungarian territory for a period of eight years.”

“In Belgium, the Court of First Instance of Liege acquitted two Turkish nationals allegedly involved in PKK activities. The male defendant was charged with leading a terrorist group, and his female co-defendant was suspected of participating in the activities of a terrorist group. The investigation was launched based on police information reporting that the PKK would organise a revolutionary tax collection in Liege for the year 2013," the reports said.

"It also noted that parts of the investigation confirmed that the PKK relied on a certain degree of military organisation, with a military command, military training of new recruits and the collection of funds. Accordingly, the court concluded that the PKK can be considered as engaged in a non-international armed conflict between a national government and non-state armed forces, as foreseen in the exclusion clause under Article 141bis, dismissing the charges of leading and participating in the activities of a terrorist group on which the defendants were prosecuted," it added.

Despite some legal cases against the PKK terror group, the report also exposed the perception leading to the tolerance of PKK activities in Europe.

In the part explaining the terror group in detail, the report said: "To date, the PKK has not carried out any terrorist attack on EU soil but remains active in propaganda, recruitment and providing logistical support to its members. The group also organised rallies and demonstrations in Europe concerning Kurdish-related issues, most of which are peaceful."

In reality, the PKK and its sympathizers carried out many violent attacks and rallies targeting the Turkish community in Europe.

Last year, sympathizers of the terror group vandalized mosques and shops belonging to the Turkish community in Germany. Such incidents were also reported in Belgium and Switzerland.

Following the beginning of Operation Olive Branch in early 2018, PKK supporters also attacked 13 mosques in Germany, including Yeşil Mosque, Eyüp Sultan Mosque, Sultan Alparslan Mosque and Ulu Mosque. All of the mosques are run by the Germany branch of the Turkish-Islamic Union for Religious Affairs (DITIB).

The report described events as "the tensions between Turkish and Kurdish communities in a number of European countries."

"These occasionally escalated into clashes between Kurds and Turkish nationalists during protests and counter-protests. Such incidents were reported by Belgium, Germany and Switzerland, for example. Germany also reported that in this context a number of facilities related to Turkey – such as associations, mosques and shops – were vandalised," it added.

In its more than 40-year terror campaign against Turkey, the PKK – listed as a terrorist organization by Turkey, the U.S., and EU – has been responsible for the deaths of 40,000 people.

"Legally established associations are used as cover for some of these illegal structures. Austria arrested a Turkish member of DKHP-C, based on a European arrest warrant issued by Greece," the report noted.

The group is listed as a terrorist organization by Turkey, the U.S. and the EU. It has become less active in Turkey in recent years but remains a major security threat.

According to the report, a total of 119 foiled, failed and completed terrorist attacks were reported by a total of 13 EU Member States in 2019.

Some 1,004 individuals were arrested on suspicion of terrorism-related offenses in 19 EU Member States, with Belgium, France, Italy, Spain and the U.K. reporting the highest numbers.

Ten people died because of terrorist attacks in the EU and 27 people were injured.