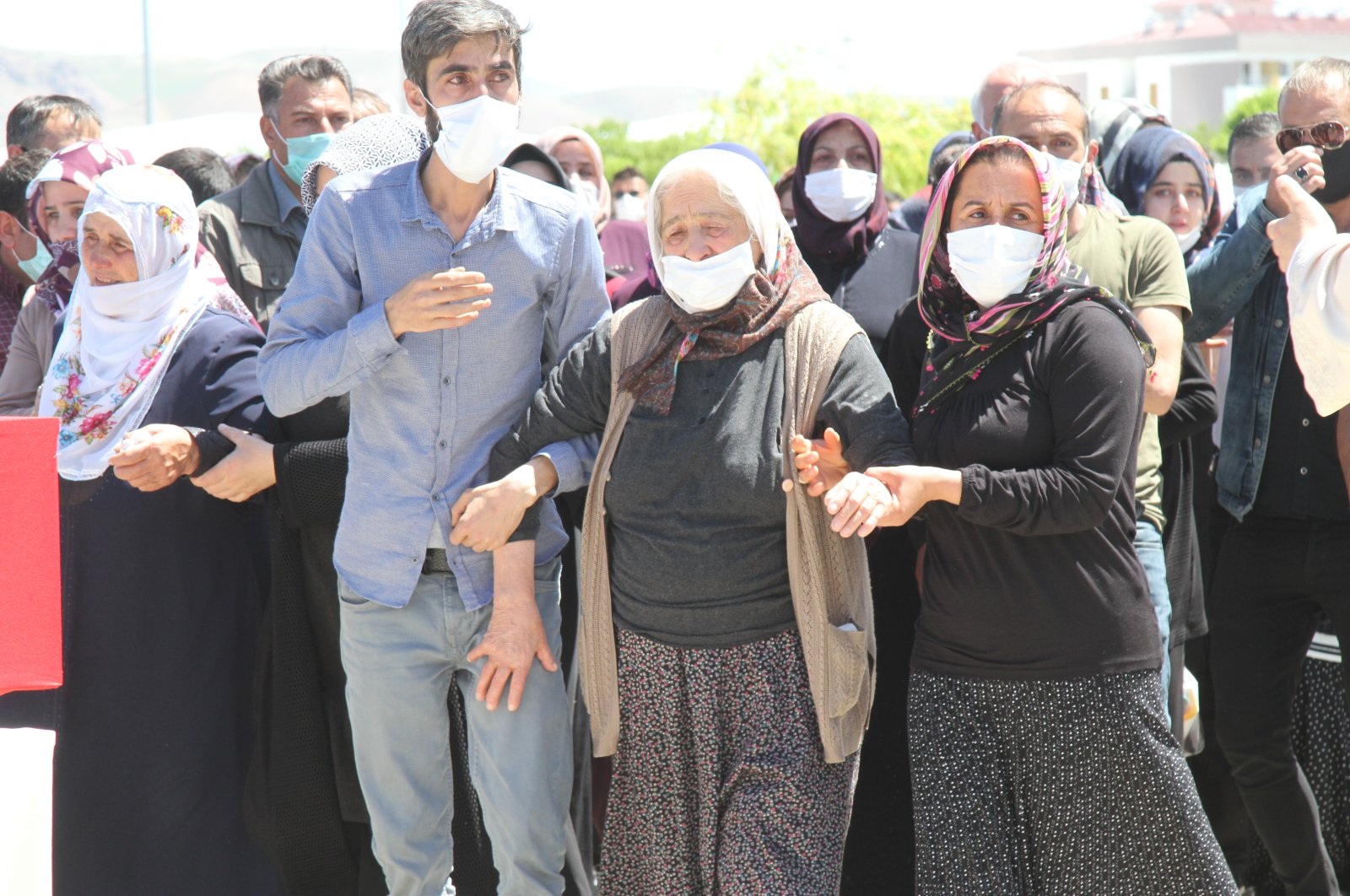 People mourn in a funeral ceremony organized for the victims of a PKK attack in eastern Van province, June 9, 2020. (SABAH)
by DAILY SABAH WITH AA Jun 09, 2020 1:13 pm
RECOMMENDED

The PKK terrorist group, which has been delivered a major blow by the Turkish military's counterterrorism operations, continues to target civilians, pursuing its 40-year-old practices of brutal terrorist attacks.

Failing to confront the security forces due to its lack of power, the PKK turns its attention to innocent civilians, trying to establish control over the people through psychological pressure and unabating attacks.

The latest attack of the terrorist group on civilians took place Monday when two people were killed and eight others were injured after a roadside bomb planted by PKK terrorists detonated as a personnel shuttle was passing by in Van province in eastern Turkey.

The attack was widely condemned both in Turkish society and among politicians, while the workers who lost their fellow colleagues to the attack denounced the bombing.

Workers who were injured in the attack continue to receive treatment at a hospital in Van. Speaking to Anadolu Agency (AA), the surviving workers expressed their sorrow over the incident.

Abdullah Dokuz said that they were "deliberately targeted" by the terrorist group as they were on their way home after work.

Dokuz added that their friends' deaths will be avenged by the Turkish military.

This last attack of the PKK was the second one in Van within a month in which civilians were targeted.

Workers of Vefa Social Support Group, which was formed to assist people during the pandemic, were attacked on May 14 while returning from a quarantined neighborhood in Van's Özalp district. Two members of the group were killed in the attack.

According to a statement from the Van Municipality following the attack, the group was in the neighborhood to distribute aid. After their work was done in the area, they were attacked by terrorists who used long-barrel weapons.

Vefa Social Support Groups were initially formed to respond to the needs of people older than 65 whose mobility has been restricted as part of coronavirus measures. Public workers, such as police, gendarmerie, security forces and personnel of Turkey's Disaster and Emergency Management Authority (AFAD), not only meet the needs of senior citizens but also provide protective equipment including masks, hand soap and disinfectants. The groups have been formed under the supervision of the district municipalities all over the country, and a call center has been established for people to obtain the group's services.

Prior to the attack in Van, the PKK targeted villagers who were collecting wood in the forests in southeastern Diyarbakır province on April 8, killing seven civilians.

The attacks of the group do not discriminate between women and children, as the innocent are often the victims of its terrorist attacks.

On July 15, 2019, two siblings, 8-year-old Ayaz and 4-year-old Nupelda Güloğlu, were killed by an improvised explosive device (IED) planted by the terrorist group while they were collecting flowers in a field in southeastern Tunceli province's Ovacık district.

Similarly, on May 5, 2019, 23-year-old Servet and his cousin, 13-year-old Diyar Bilen, fell victim to a PKK terrorist attack while they were returning from a picnic in the Cudi Mountain region in southeastern Şırnak's Silopı district.

On Aug. 11, 2017, 16-year-old Eren Bülbül, who was showing security forces the places where the terrorists were hiding, was killed by the PKK in northern Trabzon province's Maçka district.

On July 31, 2018, an 11-month-old baby, Bedirhan Karakaya, became one of the youngest victims of the PKK when he was killed alongside his mother as they were returning from a visit to his father, Gendermarie Sgt. Serkan Karakaya, in southeastern Hakkari province's Yüksekova district.

Attacking civilians, especially women and children, has long been a trademark of PKK terrorism. The terrorist group has been engaging in such activities since the day it was founded.

The first armored attack of the terrorist group against Turkish security forces and society took place on Aug. 15, 1984, in the Eruh district of southeastern Siirt province and the Şemdinli district of Hakkari. In these attacks, one soldier was killed while nine others were injured. Three civilians were also injured, becoming the first civilian victims of a PKK terrorist attack.

This first attack was followed by another one on Jan. 22, 1987, when a wedding in Şırnak was targeted by terrorists, killing eight civilians, including four women and two children.

These initial attacks were followed by four decades of bloodshed by the terrorist group. Especially in the 1990s, the group's attacks gained momentum, causing the deaths of thousands of civilians.

In 1993, the terrorist group committed the Başbağlar massacre during which 33 villagers were killed in Başbağlar, a small village in the Kemaliye district in northeastern Turkey’s Erzincan province. Twenty-eight of the victims – all of them male residents of the village – were shot execution-style by a group of terrorists who stormed the village. Five others were killed when terrorists set houses, a mosque and a school in the village on fire.

On July 24, 1995, the terrorists raided a village in Van's Gürpınar district, where they faced resistance from the villagers. Responding by attacking the village houses with missiles, the PKK killed 12 civilians, seven of whom were women and children.

Similar attacks by the terrorist group took place throughout the 1990s, even killing 1-month-old babies.

By the 2000s, the terrorist group started to move its attacks to the urban areas, killing civilians in city centers.

On Sept. 20, 2011, six young women became the target of the PKK in Siirt. Zeynep Evin, alongside with her five friends, were hanging out in her car when the PKK terrorists attacked them. Four of the young women were killed as a result of the attack, while the other two were injured.

Apart from civilians, the terrorist group also targets certain professions in frequent attacks. One of the professions that became a constant target of the PKK over the years is teachers. The first attack on teachers took place on Sept. 11, 1994, when six teachers in Tunceli were fusilladed by the terrorists. A month after this incident, five teachers were kidnapped by the PKK in eastern Erzurum province, four of whom were killed later on.

One of the most striking killings of a teacher by the terrorist group took place on June 9, 2017, when 22-year-old music teacher Şenay Aybüke Yalçın fell victim to the terrorists on her way home after the last day of school in Batman. The car she was in was hit by stray bullets as terrorists shot assault rifles, targeting a nearby car belonging to a local mayor in the Kozluk district of the province. The terrorists' target was another vehicle carrying lawyer Muhammet Işık, the nephew of Mayor Veysi Işık. Heavily injured in the attack, Yalçın eventually died in the hospital. The killing of the young teacher, who was in her first teaching post in Batman, had a major impact across the country. On Tuesday, President Recep Tayyip Erdoğan commemorated Yalçın's killing on its third anniversary.