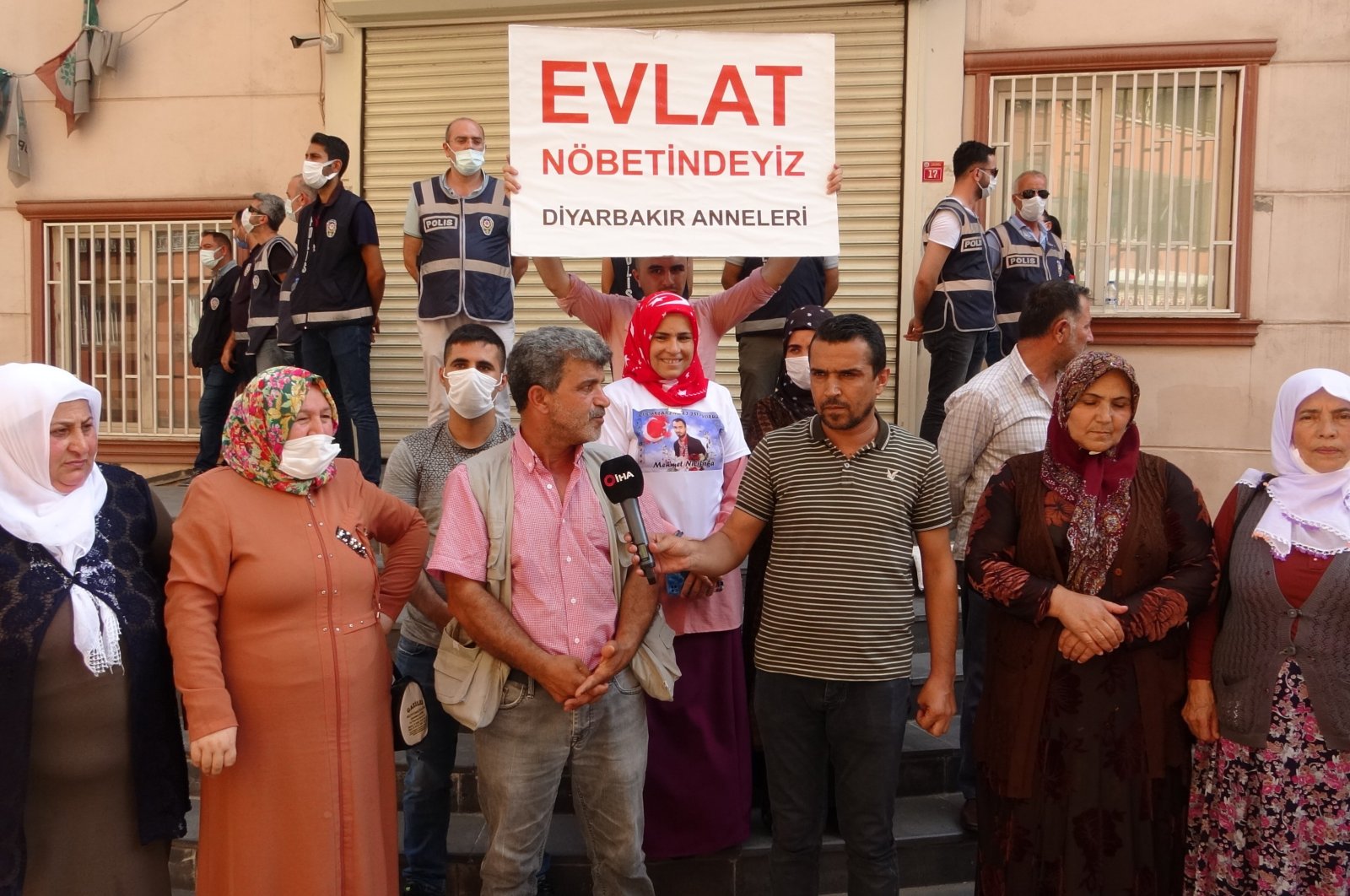 Families make a press statement after CHP lawmaker fails to visit them in front of the HDP headquarters in Diyarbakır, July 2, 2021. (IHA Photo)
by DAILY SABAH Jul 02, 2021 8:54 pm
RECOMMENDED

Families in front of the pro-PKK terrorist organization Peoples’ Democratic Party (HDP) headquarters in southeastern Turkey protesting the abduction of their children at the hands of PKK terrorists criticized a main opposition Republican People’s Party (CHP) lawmaker for failing to keep his promise to visit them.

The families, who have been protesting for the past 669 days, criticized CHP Ankara Deputy Ali Haydar Hakverdi on Thursday as he attempted to sneak out the back door of a hotel he was visiting, Ihlas News Agency (IHA) reported Friday.

After the initial confrontation with the lawmaker, the families said Hakverdi told them that he would come back to visit and listen to them on Friday and he gave them his word of honor. He asked Celil Begdaş, one of the protesting fathers, for his phone number and told him that he would give him a call.

However, the lawmaker failed to show up on Friday, to the dismay of the families.

“He told us that he would resign if he does not show up at our protests,” Begdaş said, adding that they expect him to immediately resign.

He continued by noting that the lawmaker told them that he was coming in the morning but then said he’s not coming. He then called again and told them that CHP co-chairs would come to visit them, but nobody came.

“So it seems the HDP instructed them not to come,” he said.

Another father, Süleyman Aydın, claimed that the CHP lawmaker could not gain permission from the HDP.

Begdaş claims that his 17-year-old son Yusuf was taken into the PKK through the assistance of the HDP.

The protests started in September 2019 with the cry of a mother, Hacire Akar, who launched a sit-in protest on the steps of the HDP's headquarters for her 21-year-old son. Unlike many of the other mothers' situations, it took only three days for Akar to be reunited with her son and complete her mission.

Since that day, the number of families who want to learn about the fate of their children has gradually increased and some of them have reunited with their children who surrendered to Turkish security forces.

The protesting parents claim the party is responsible for kidnapping or tricking their children to join the terrorist group. The HDP, long facing public reaction and judicial probes over its ties to the PKK, is under pressure from this growing civilian protest movement. Various groups from around Turkey have supported the Kurdish mothers in their cause, with many paying visits to show their support.