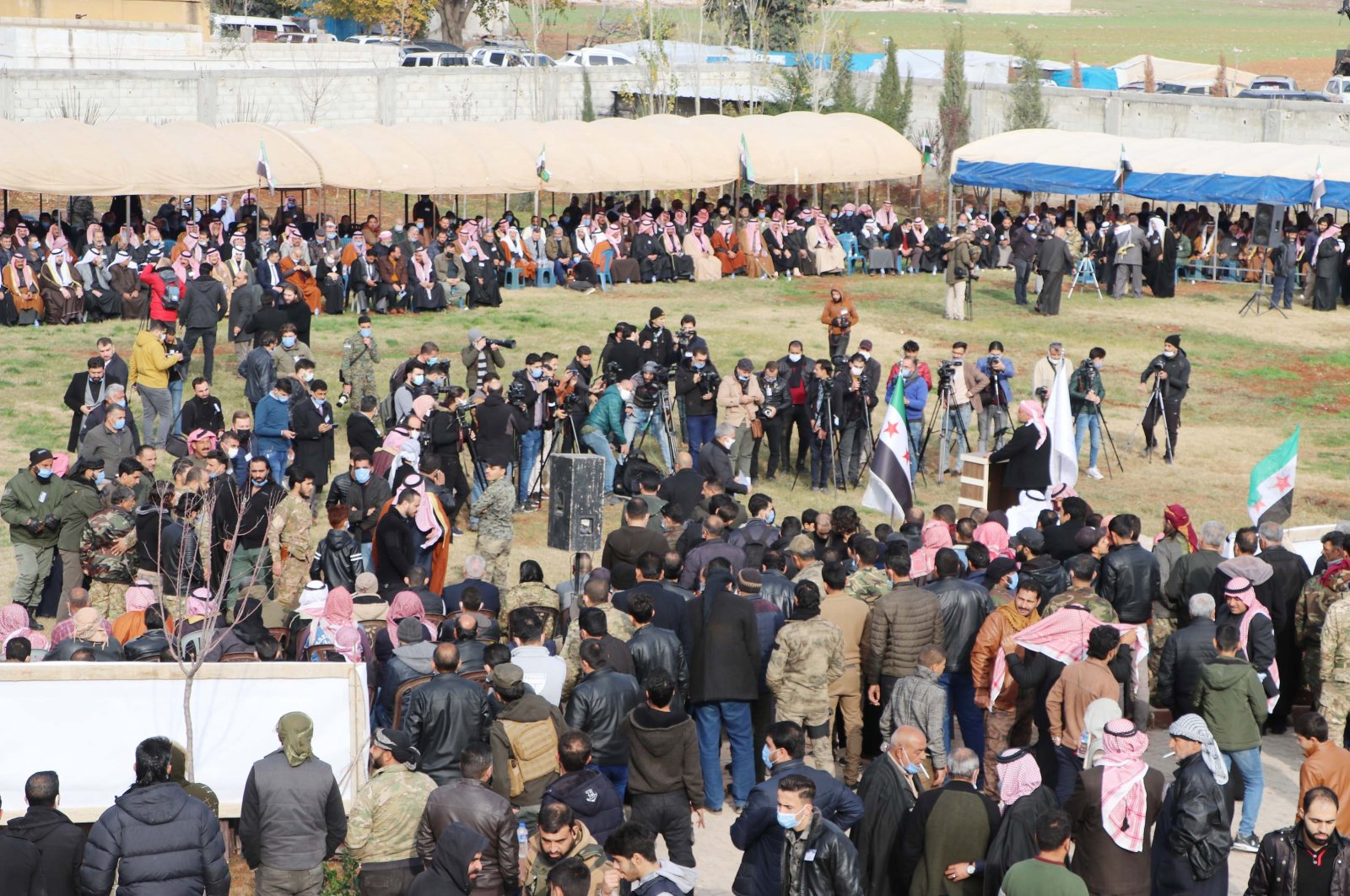 Syrian tribal leaders have pledged their determination to push PKK's Syrian affiliate, the YPG terrorists out of northeastern Syria to allow the return of displaced people to their homes in the area, in the second grand meeting attended by thousands in Azaz.

Some 3,000 participants attended the meeting organized by the Syrian Council of Tribes and Clans on Monday.

The prime minister of the Syrian Interim Government, Abdurrahman Mustafa, the director of the Syrian Christian Foundation, Hanna Milki, the representative of the Kurdish National Tribe of Ras al-Ain, Ibrahim Malla, and a Turkmen representative, Muhammed Salih, attended the council's second annual congress, which was held in the municipality of Sijo near the city of Azaz.

Speaking to Anadolu Agency (AA), the council's secretary-general, Salem Abdulaziz Muslat, said the council is part of greater Syria and aims to serve all Syrian people without discrimination.

"The main purpose here is to unite on the axis of the homeland and the nation, which is our greatest common denominator," Muslat said, adding the goal is to free the capital Damascus from the Assad regime and the Qandil Mountains from the YPG/PKK terrorists.

Mustafa said the tribes began to organize against the YPG/PKK terrorist group in 2018, emphasizing the need to liberate the clans and tribes east of the Euphrates river.

Malla underlined that the Kurds have been an integral part of society since the day the Syrian state was established.

Explaining the strong ties the community has developed through friendship and kinship to the Arab tribes and Turkmen families in Syria, he said the PKK collaborators do not represent the Kurds and that Syria is one state comprised of Arab, Kurdish and Turkmen peoples.

"We will continue our fight against groups that destabilize Syria, projects against territorial integrity and groups with separatist agendas," Malla added.

The leader of the Tay tribe, Abu Ibrahim al-Tawil, told Ihlas News Agency (IHA) that they continue to reiterate their support for the Syrian National Army (SNA) and the Turkish military.

In December 2018, more than 150 Arab, Turkmen, Kurdish and Syriac tribal leaders in Syria united under one umbrella organization against the separatist YPG/PKK terrorist group.

In August, the leaders of 11 tribes announced that they would like to join the fight against the YPG/PKK terrorists in northern Syria, in a meeting held with a former Justice and Development Party (AK Party) lawmaker Mahmut Kaplan in the capital Ankara.

Prominent Syrian Arab tribes, including Agedat, have been demanding an end to the occupation of their lands by the YPG/PKK terrorist group. They also demanded that the U.S.-backed coalition hand administration of the area over to local tribes rather than YPG/PKK terrorists.

The YPG/PKK establishes local councils in the areas it captured from Daesh with U.S. support, including Deir el-Zour, east of the Euphrates river.

The U.S. has primarily partnered with the YPG/PKK in northeastern Syria in the fight against the Daesh terrorist group. Turkey strongly opposes the YPG/PKK's presence in northern Syria, which has been a major sticking point in strained Turkey-U.S. relations. The U.S. has provided military training and thousands of truckloads of weaponry to the terrorist group, despite its NATO ally's security concerns.

Local people living in areas held by the YPG/PKK have long suffered from its atrocities, as the terrorist organization has a notorious record of human rights abuses, ranging from kidnappings, recruitment of child soldiers, torture, ethnic cleansing and forced displacement, in Syria.