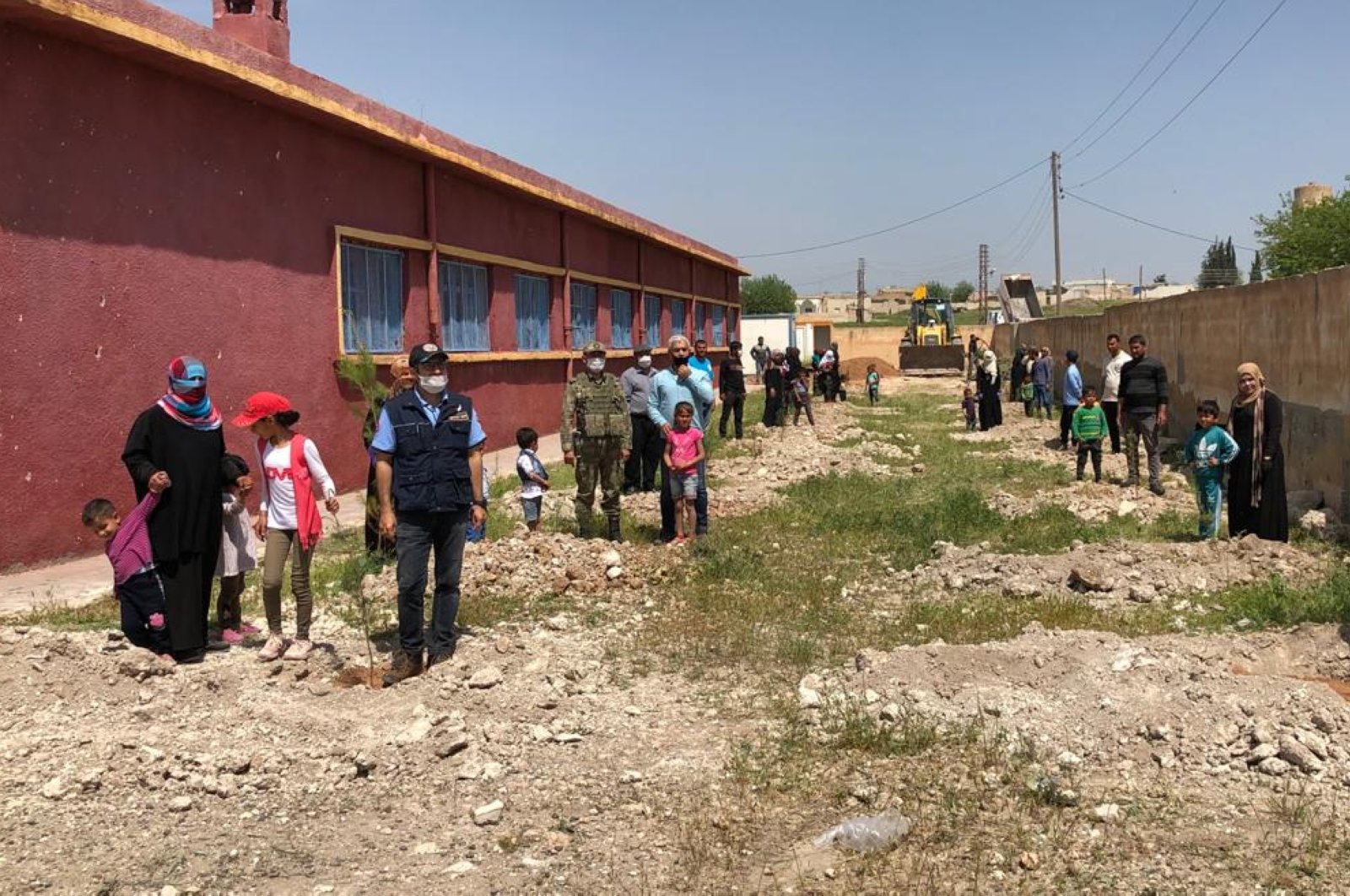 Turkey is redoubling its efforts to rebuild the infrastructure of northern Syria’s Tal Abyad, an area the country's armed forces cleared of terrorist elements during Operation Peace Spring last year.

According to the statement released by the governorate of Turkey’s southeastern border province of Şanlıurfa, the Syria Support and Coordination Center (SUDKOM) has been conducting works for upgrading the living standards of Tal Abyad’s local people.

While officials continue efforts to open boreholes with the support of Turkey's state-run State Hydraulic Works (DSİ) agency, locals have also joined in with their support.

In addition to infrastructure efforts, SUDKOM officials have conducted projects to reforest the region, which often suffers from drought.

With the support of the Turkish Armed Forces’ (TSK) humanitarian aid teams, 100 trees provided by Turkey’s Ministry of Agriculture and Forestry were planted in celebration of the 100th anniversary of the Grand National Assembly of Turkey (TBMM).

Turkey's efforts to normalize the regions liberated from YPG/PKK and Daesh terrorists have enabled citizens to return to their everyday life with schools and hospitals reopened and roads built. Turkey has gained appreciation around the world for its efforts in assisting Syrians who were forced to flee their homes due to the ongoing civil war. Hosting more than 3.5 million Syrians and spending billions of dollars on their needs, despite the ongoing conflict, Turkey now looks to establish prosperous settlements and improve the living conditions of Syrians in Turkish-controlled areas.

After launching three consecutive operations in northern Syria, Turkey rolled up its sleeves to reconstruct hospitals, schools, mosques and roads destroyed by the YPG/PKK. Within the scope of ameliorating the region's social infrastructure, people were given food and clothing aid by several nongovernmental organizations while roads and buildings were rebuilt.

Tal Abyad is populated to a great extent by Arabs and was occupied by the Daesh terrorist group in 2014. A year later, the YPG/PKK occupied the city with the support of the U.S. Tal Abyad was cleared of terrorists as part of Operation Peace Spring on Oct. 13. Since then, locals have gradually returned with humanitarian aid being provided with the help of the TSK and the Turkish Red Crescent.

Terrorist organizations also left the region littered with bombs and improvised explosive devices in civilian settlements such as in residential buildings and schools, and under bridges and roads. The TSK has been working to detect these explosives and neutralize them.

In its more than 35-year terror campaign against Turkey, the PKK – listed as a terrorist organization by Turkey, the U.S. and the European Union – has been responsible for the deaths of 40,000 people, including women, children and infants. The YPG is the PKK's branch in Syria.